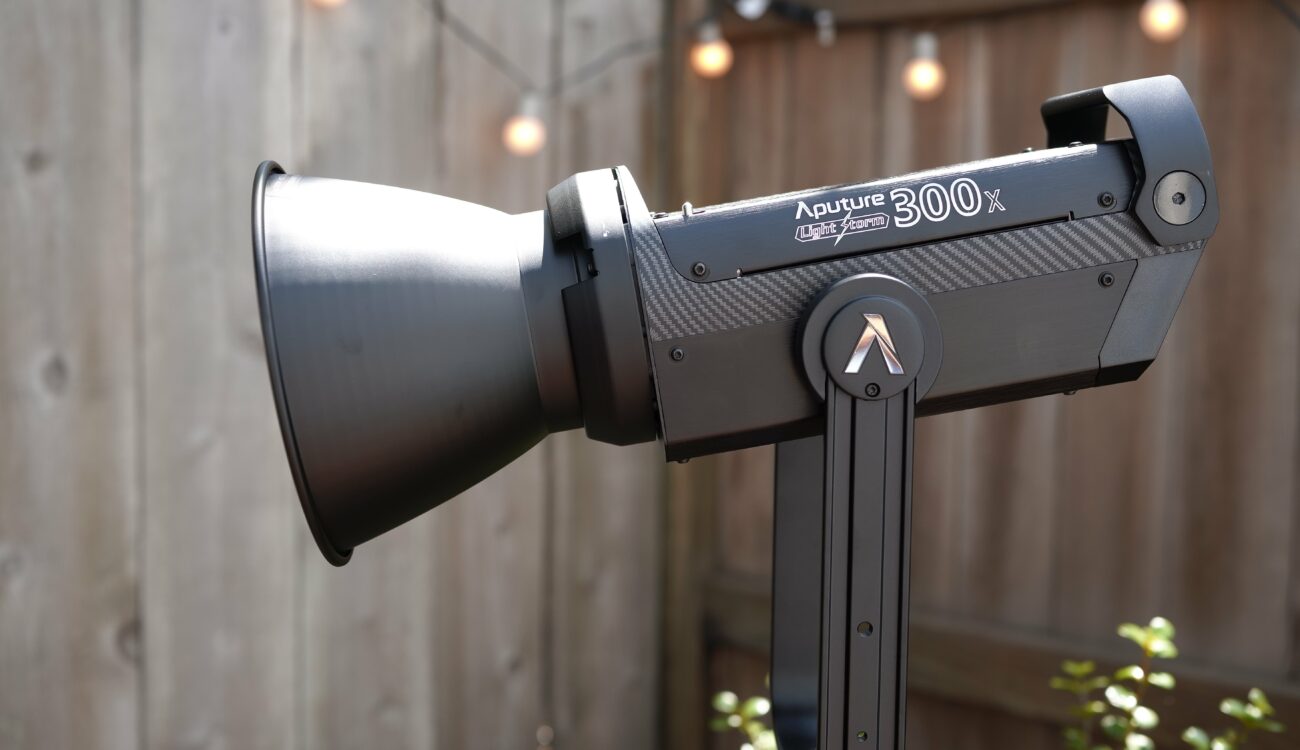 The 300 level Light Storm series from Aputure just became bi-color with the addition of the 300x that we previously announced during IBC 2019. We had the opportunity to review the flagship 300D MK II late last year and called it “Aputure’s best light to date”. Given that the 300D MK II boasts Aputure’s highest output for their LED fixtures so far we would expect similarly impressive punch from the 300x. Do we give up anything in exchange for that bi-color feature and is there more under the hood of the 300x then simply being able to select different kelvin temperatures? Here’s our first look of the 300x: 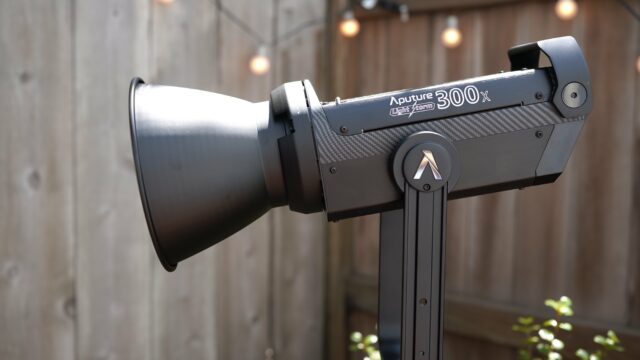 Nobody re-invented the wheel here in terms of the look and general usability of the Aputure LS 300x. If you’ve used a 300D MK II then you will be at home with the 300x, but that isn’t to say that there haven’t been any design improvements beyond the addition of bi-color control between 2700K and 6500K. For one, there’s a new “max output” and “constant output” mode. In constant output mode you can change your color temperature while keeping the same overall luminance. Max output —  just like it sounds — optimizes everything for more output overall, though Aputure suggests keeping your kelvin range between 4000K and 5500K to achieve your highest overall output. This is typical with most bi-color LED fixtures in the sense that there is a sweet spot for output when it comes to your kelvin selection.

There’s an additional wheel added on the controller beneath the familiar intensity wheel from previous generations that gives you CCT control and you’re also able to easily create and select presets by pressing in the middle of the wheel. You can adjust your kelvin temp in 50K increments, which is great for pinpoint accuracy when matching other light sources. Presets in general are very handy for quickly shifting between different looks while on-location depending of time of day or look of your scene. 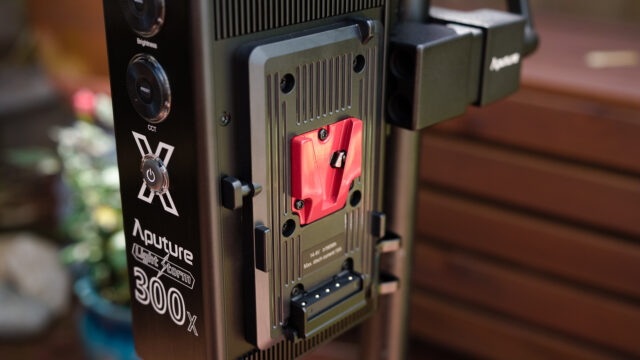 The 300x controller. Note the additional CCT wheel above the power button. The 300x is available in both V-mount and gold mount options. Image Credit: Graham Sheldon

Similarities to the 300D MK II:

Lots of great quality of life improvements from the 300D MK II have luckily carried over into the 300x.  Like with the 300D MK II, four dimming curves (logarithmic, exponential, linear and S-curve) are also present in the 300x allowing for different types of dimming mid-shot if necessary. You’ll also find the steadily improving Sidus Link App (available on ios or android) works well controlling the 300x through bluetooth. You also have full compatibility with DMX512. No big surprises here.

The excellent light clamp attaching the ballast/controller to a stand also ships standard with a great semi-rigid carrying case and you’ll of course find the Bowens-S mount works with your normal Aputure and other 3rd party accessories from brands like Chimera. The yoke of the MK II generation of Aputure lights is vastly improved over the previous generation and that yoke is present here too.

9 built-in effects such as “paparazzi” and “TV” found their way to the 300x too. 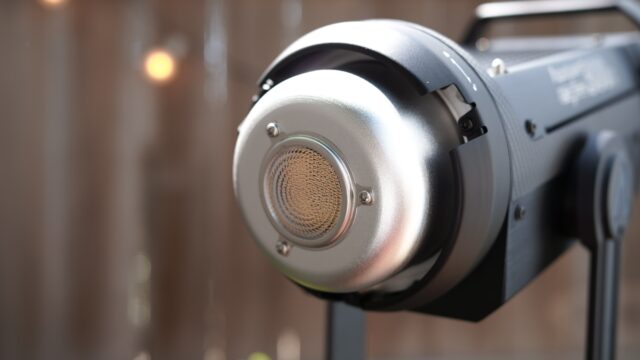 Why would anyone buy the 300D MK II over the more versatile (in terms of color temp at least) 300x? The answer is output. There had to be a tradeoff for the addition of bi-color, right? This varies per light to some degree, but you’ll have an output hit in the realm of 25-35% on average (depending on color temp) with a bare bulb at 1 meter according to a little back of the envelope math when comparing the 300x to the 300D MK II. Again, keep in mind that this is an estimate based on manufacturer supplied specs and I’ll need to secure a 300D MK II for some additional head to head testing in the future once our local quarantine/stay at home order is lifted.

I grabbed a few quick measurements with the C700-U SpectroMaster from Sekonic for a quick gauge of how the Aputure 300x handled color temp and overall output at a distance of 3ft. Here are my readings with a target of 5600K using the included Hyper Reflector attachment and with the fixture set to “max output” mode. Throughout all my testing I was hitting a excellent CRI (Color rendering index) average of 97. 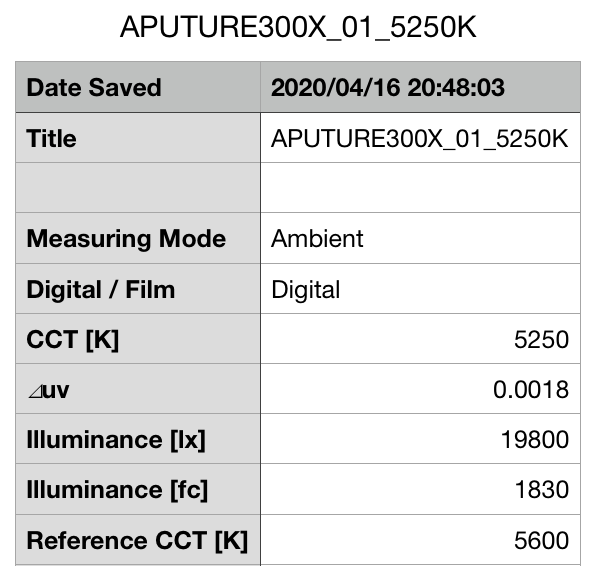 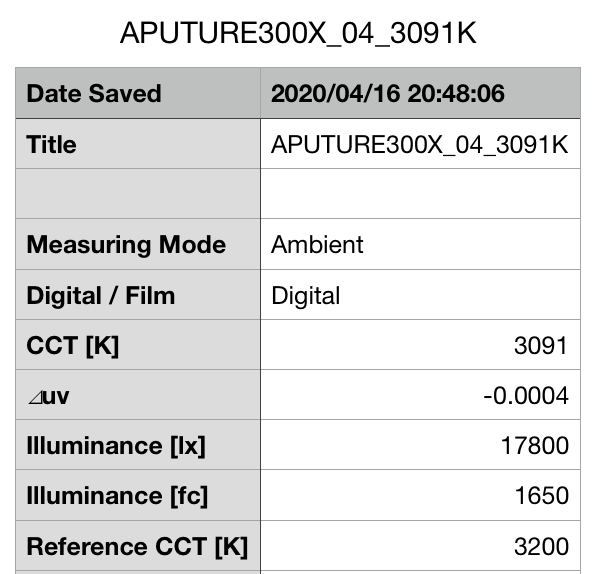 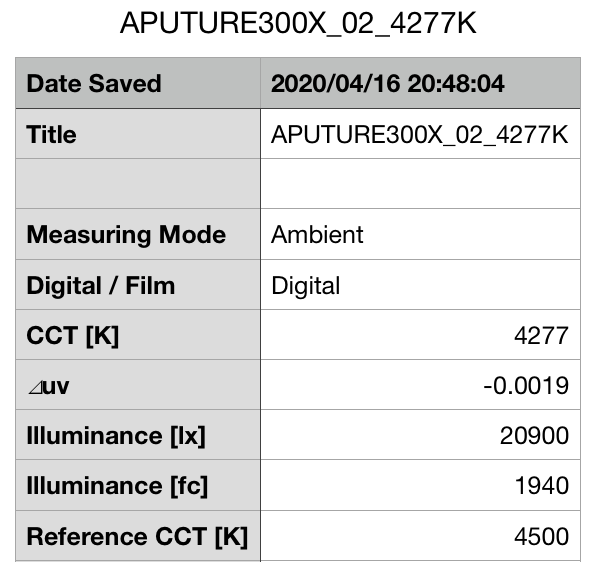 With a 4277K reading these are very solid marks for a kelvin temp target at 4500K.  Interestingly the peak output appears to be around 45K with this fixture. I would personally have hoped the peak output would land closer to a more commonly used color temp like daylight (56K) or tungsten (32K), but not a huge issue.

To check the color rendition I also grabbed a quick reading with the light set back to 5600K. 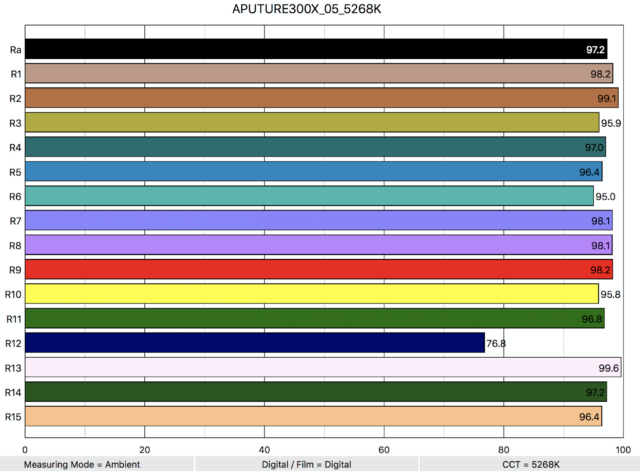 These results fall in line with my previously mentioned excellent CRI average of 97 for the 300x. The 300x handles colors very, very well. No debate there from my point of view. 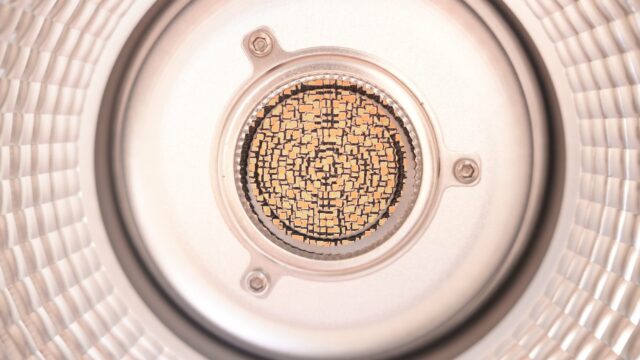 It’s worth noting that Aputure hasn’t put a MK II designation in the title of the 300x despite the similar feel to the 300D MK II and to me that suggestions this is their first attempt at a high output bi-color fixture and they have every intention to continue to improve the design. Improvements don’t need to come in the form of new hardware either as you can update the overall system with improved firmware in the future. For example, there’s already a new firmware update for the 300D MK II available HERE.

There was some chatter online as folks expressed their slight disappointment over initially snagging the 300D MK II when the 300x feels like a more versatile option on paper. Fear not — if you purchased the 300D MK II you’ll still have an excellent high-output daylight source that’s extremely useful during filming. The 300x feels like another useful tool in the kit versus some kind of upgrade over the 300D MK II and it is a welcome addition to the Aputure lineup. 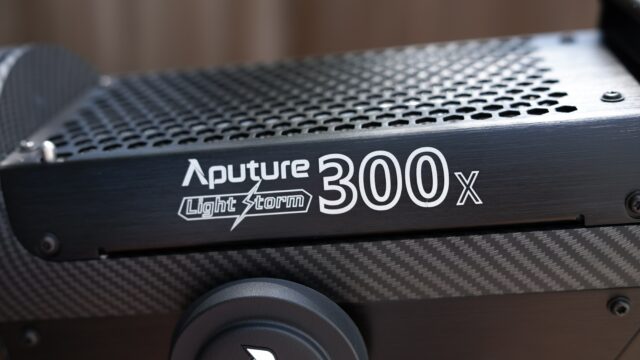 What are your impressions of the Aputure Light Storm 300x? Is it worth a drop in output for the added bi-color feature? Will you be adding the 300x to your kit? Let us know in the comments below!