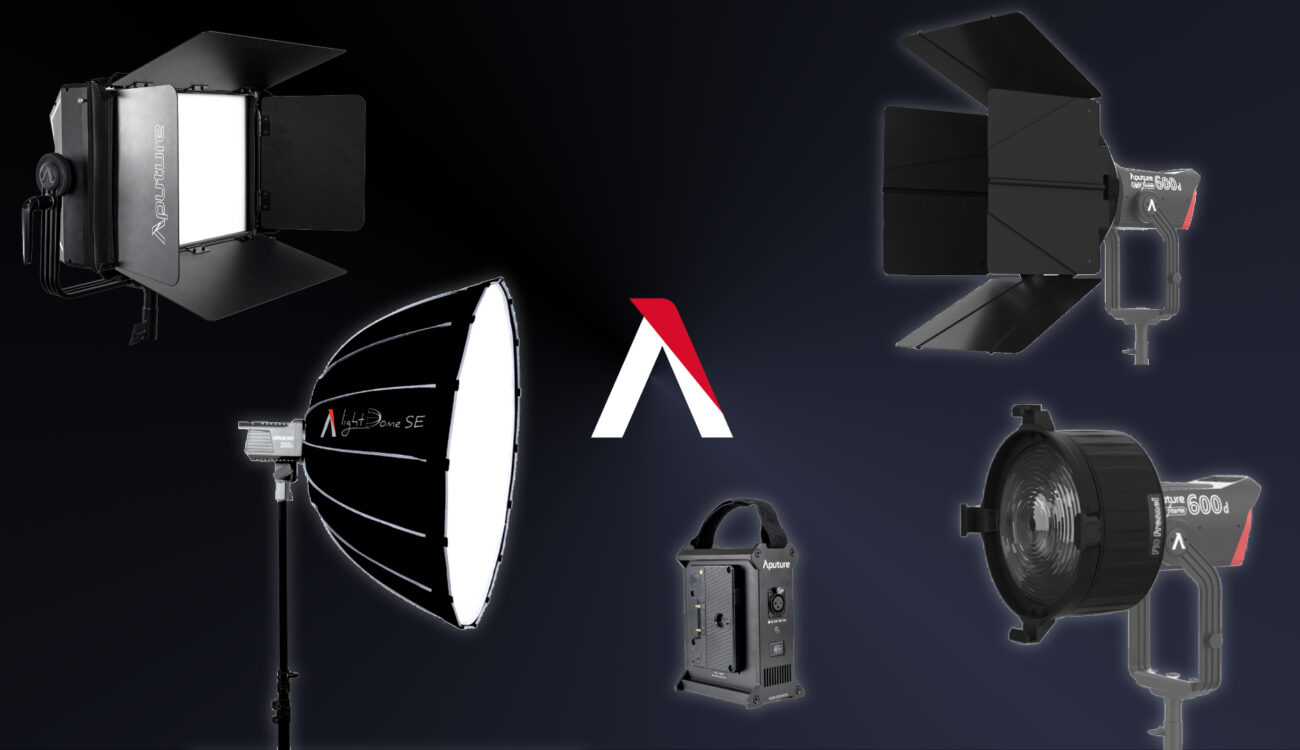 A big accessory release was announced today by lighting manufacturer Aputure. Four of the new accessories are aimed at Amaran, 600d Pro and Nova P300c users specifically, though there is some compatibility options beyond those fixtures.

If you happen to be an owner/operator of some sorts of Aputure’s vast catalogue of affordable, yet pretty capable lights, this might be for you: Five new accesoories have been announced today, including a new fresnel lens attachment, two types of barndors (for LS 600d Pro and for Nova P300c), a new LightDome and a 2-Bay Battery Power solution for either V-mount or Gold mount.

Starting first with the accessories aimed at 600d Pro users: both the F10 Fresnel and F10 Barn Doors are mean’t to compliment the 600d Pro’s unique design and replicate results close to the 5K Tungsten Fresnel of old.

The F10 fresnel attachment has a 15°-45° spot to flood changeable beam angle, comes in its own carrying case and is compatible with the F10 barn doors.

At nearly 8.5 lbs the F10 Fresnel is technically compatible with other Bowens mounted fixtures, but you’ll want to keep the weight in mind before tossing it on a lamp head like the Aputure 120d MK II, for example (which weighs only 4.8 pounds). This is really aimed at users of the 600d Pro and the F10 Fresnel comes in at $219.00 while the F10 barn doors are priced at $139.00.

It includes two diffusion strengths (1.5 and 2.5 stop) and a grid attachment for narrowing the beam of the 33.5″ parabolic softbox.

Aputure Nova P300c users also have a new barn door system to look forward to priced at $169.00. This is useful because we saw a variety of softbox options out of the gate from Aputure and other third parties like DoP Choice for the Nova, but no barn door attachment was available until now.

And, finally, the Aputure 2-Bay power station available in either V-mount or Gold Mount with 3-pin XLR output is a useful solution for those looking to convert 14.4V output to a 48V DC output for lighting fixtures demanding lots of juice. Most of us have lots of 14.4V batteries for our cameras and this useful device gives those batteries new purpose as lighting battery power at a cost of $179.00.

We’ve heard rumors about a few of these accessories in the past, but they’ve now all begun to ship under the normal tricky shipping constraints of the pandemic.