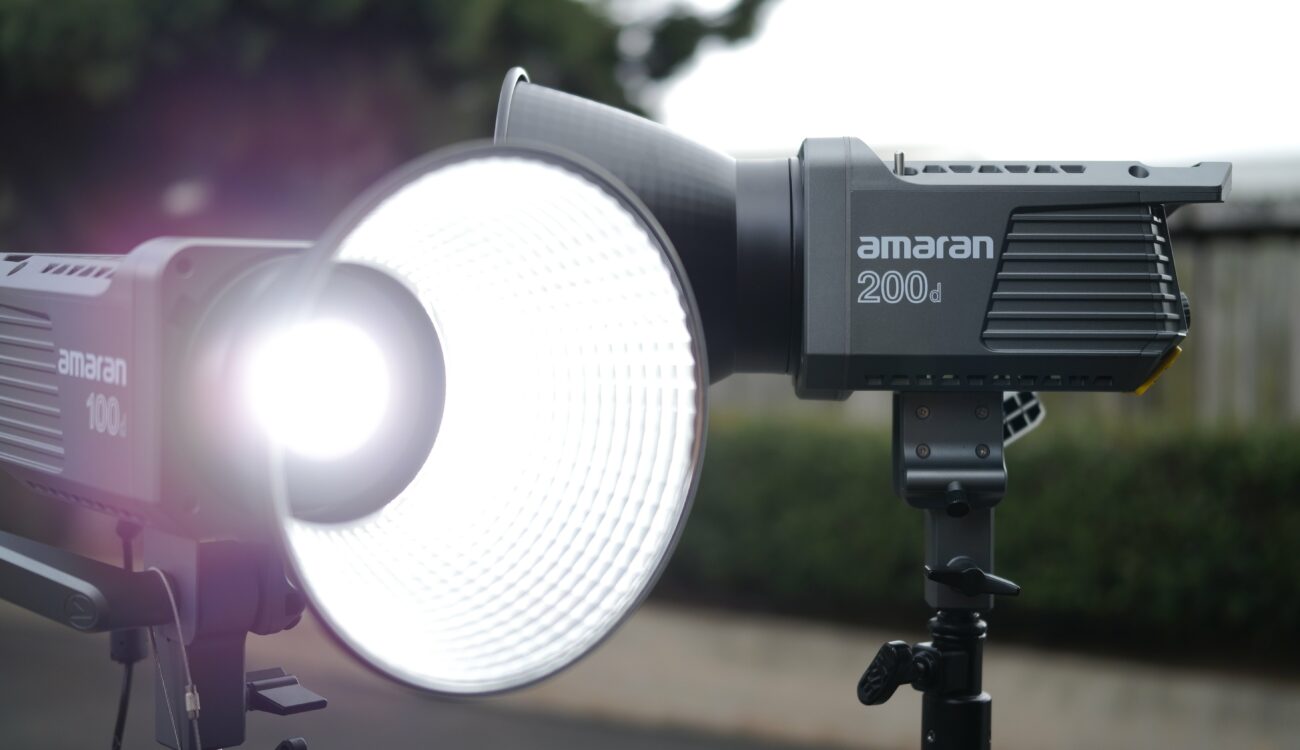 by Graham Sheldon14 days ago

When Aputure announced a series of affordable “Amaran” daylight and bi-color lights alongside their live stream deep dive into the flagship 600d Pro, it came as a surprise. The Amaran 100d and 200d are both hundreds of dollars-cheaper when compared to the Aputure 120d MK II which raises questions for the consumer. What are you giving up in exchange for these savings? And, is what you are giving up worth the tradeoff? Let’s find out.

Lately, Aputure has been announcing new products one after another, and the pricing spectrum spans from the flagship 600d Pro at $1890 and Nova fixtures at $1699 to the $299 Amaran 200d and $199 100d. Reviewing these lights is tricky because I don’t want to leave the impression this is wholly about what you’re giving up when compared to other Aputure light. Doing that would create the sense that these two fixtures are somehow lacking and this is not the case at all. Considered on their own, the Amaran 100d and 200d (d as in daylight) are unique and really affordable, but having said that, the obvious comparison is with the Aputure 120d MK II, so let’s dive in.

First, let’s talk about overall construction. These lights, with their plastic polycarbonate build, are clearly not meant to take a hit and a careful owner/op will be fine, but a quick rotation rental house will want the 120d MK II for long term survival. Also, with the affordable price tag the 100d and 200d will probably be an easier buy decision for many over a mandatory rental item.

The plastic components of the Amaran 100d and 200d do result in low weight. You can mount the 100d and 200d anywhere and not worry about it staying put. However, if a fall does somehow occur, expect a broken fixture. The yoke (pictured above) is also plastic and could over time become an eventual failure point as it bears normal amounts of tilting and panning. If replacement parts are needed, Aputure has increased its offerings in that department. A quick internet search will also reveal a variety of first-party part options available through aliexpress.

Again, keep in mind that both instruments are hundreds of dollars cheaper than the $745 Aputure 120D MK II and the build quality seems to be where the majority of dollars have been saved. With the Amaran 100d and 200d, It’s worth noting that you aren’t getting the lovely semi-rigid transport case that comes with many Aputure lights. What you get is a cardboard box with cut foam. Of course, if needed, this foam can easily be removed and put to use in a more rugged hard case.

To me, the plastic nature of the build or the lack of an included case with either the Amaran 100d or 200d aren’t deal-breakers. The current practice is for most brands to send the lamp head and a power cable without all the bells and whistles. It’s Aputure that has raised the bar by including accessories with their fixture, but that’s certainly not the industry norm. Also, the overall plastic build of the Amaran 100d or 200d doesn’t bug me because I make it a point to take care of my instruments and both lights are punching way above their weight when it comes to the quality of light output (more on that below).

In terms of control, as far as I can tell, no corners have been cut. A panel on the back of the light (pictured above) is easy to use and allows for adjustable dimming in single percentage increments from 1%-100%. You also have Bluetooth control in the Amaran series and that means you’ll find the Sidus Link App is useful. As a reminder, for the Aputure 120d MK II you’ll need the $89 Sidus Bridge accessory to allow for Bluetooth connectivity.

If, based on the above, you’re starting to get a little concerned, know that where these fixtures really shine (pun intended) is in the color temp accuracy and output/cost/size ratios. This is great because in the end what matters in a light is how it looks on camera, right?

I grabbed a few measurements on my Sekonic C-700U Spectrometer to see how accurately the Amaran 100d handled color temp (kelvin) and output (lx) from a distance of 3 ft and with the included reflector attached. Here are my readings with a target of 5600K:

Results: nothing less than stellar! I hit a kelvin temp of 5618K with a target of 5600K (true daylight). The output of 21600lx is also nothing to scoff at. I haven’t tested tons of fixtures with a price point of $199, but these kelvin results have to be near the top of the pile, and it’s worth noting that the Aputure 120D MK II has a listed kelvin target of 5500K.

Now we move to the Amaran 200d — again with a target of 5600K and the included reflector attached:

Update: Please keep in mind that a lx reading is not the only indicator of overall output. A tighter beam angle also contributes to a larger lx reading, so you’ll want to keep the beam angle in mind when comparing fixtures.

The one-person band/YouTube crowd will love them both and so will in-house video teams shooting web content, an activity which has become much more common.

If the 100d and 200d don’t move from a stand in the corner of a room, they’re up to the task. But if you’re in the market for a kit that will endure the jolts expected from a truck as it bounces from location to location, the beefier and more expensive Aputure 120d MK II may be the ticket.
While I didn’t have a chance for this review to test the 100x and 200x bi-color versions in the Amaran line, you’ll want to consider color temperature.

Do you need the ability to change the color temperature within the fixture or will gels do? For adding gels to the Amaran 100d and 200d, you’ll find the Aputure barn doors available here.

Both fixtures feature a Bowens S-Type mount which opens up a whole range of excellent accessories from Aputure. Take a look at Cined to see what’s already been covered. Everything from the Fresnel 2X to barn doors/space light and lanterns accessories are available and there’s also a new Lightdome SE softbox specifically designed for the Amaran line.

The Lightdome SE is more compact and pairs well with the less substantial yoke on the Amaran 100d and 200d. More details on the new Lightdome SE can be found here.

While it’s true that Ted Sim, the president of Aputure mentioned in a recent live stream that “you never see a grip truck filled with just one brand of light,” it wouldn’t surprise me if Aputure’s goal is to become a one-stop LED lighting manufacturer for all possible filming scenarios.

The Amaran 100d and 200d are affordable, display excellent color handling and output, and fit neatly into an ecosystem of available accessories. Still, I can’t help but wonder if these lights are in danger of taking away some of the luster of the Aputure 120d MK II. If you were already considering the Aputure 120d MK II, then you have some serious decisions to make here when comparing it to the Amaran series — decisions that mainly come down to exterior build quality and cost.

It’s hard to find fault with there being so many affordable LED options these days –  a win-win for filmmakers to be sure. Given the cost of the Amaran 100d and 200d, they may become the new entry fixture for filmmakers with the Aputure 120d, 300d, and 600d Pro lines holding a place on the wish list for when need and opportunity arise.

What do you think? Would you go for the Aputure 120d MK II or do the Amaran 100d and 200d make more sense in your kit? Let us know in the comments below!