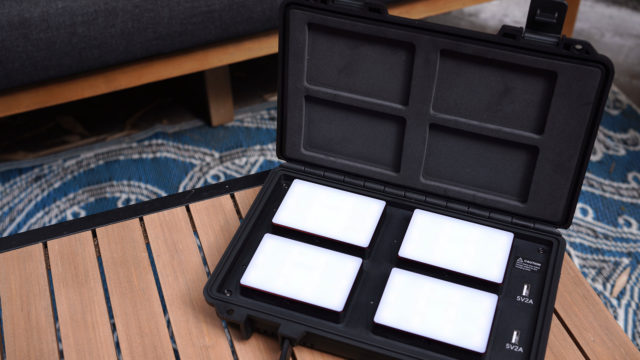 I originally wrote about the standalone Aputure RGBWW LED MC light late last year and even then I was speculating that the MC might work best as part of a kit, versus a one-off purchase. Given the size/weight and the $90.00 per-light cost it felt to me like most users will want multiple MC fixtures for battery redundancy and to simply tape, velcro, or use the built-in magnet to mount a few in shots or to replace existing practicals at a location in one swoop. Well, the first MC kit is finally shipping in the form of a 4-light hard case allowing for both wireless Qi and dual USB charging. Here’s our first look:

Given that I’m often bouncing between shoots using a variety of different fixtures, I find kits to be an especially important part of my workflow and organization. The amount of prep required for large shoots with many different lights can be time-consuming and having everything in a turn-key kit that is easy to charge and keep track of the accessories within is very helpful. The 4-light MC kit from Aputure is a streamlined solution to transport and keep your various MC lights charged in a single compact package.

The kit comes in two separate parts: one foam lined hard case with four MC lights and four corresponding slots for charging, one power input, and two USB outputs for charging additional MC lights or other mobile devices and a soft sleeve style case with room for additional accessories.

Let’s start with the hard case. Four vents on the exterior provide for passive cooling and things do get hot if you leave the case shut while charging all four depleted MC batteries. To combat this you can obviously leave the case door open for additional cooling while charging.

There’s lots to love about wireless charging as a technology, but charging speed does seem to take a hit with the Qi charging system. For me, it was taking over three hours to charge all four MC lights from zero power while mounted on the wireless charging pads. The USB output out of the case took about half that time to charge an MC light to full. So, in a charging emergency, you might still want to grab a bunch of USB chargers and go that route or at least charge two MC lights with the USB outputs in the case.

In the future, I’d like to see an MC kit where everything is combined into one standalone case. Having a separate sleeve for accessories and the four MC lights being in the separate hard case makes for one more thing you’ll have to make sure to put on the truck for a fully useful package. That being said, everything is well organized in the accessories soft case and it ships with the following items inside:

The two cold shoe mounts are excellent and don’t seem prone to failure like other cold shoe mounts I’ve used in the past, but only getting two rubber diffusers in the kit is a bit odd given that they are normally packaged along with the standalone $90.00 MC light purchase. For me, I would suggest buying an additional two diffusers not only to soften the output of the MC’s, but also to help hide the individual diodes of the MC light when using them as practicals in a shot. Simply add a rubber diffuser on each MC light in your frame and they’ll begin to read better as a single point source in your shot — which I personally prefer the look of.

Since we’ve covered the Aputure MC a few times in the past I won’t go into exhaustive detail here, but generally, the MC is a great little 4.59oz RGBWW LED light with a wide variety of use cases ranging from product shoots to mounted on-camera to use as background practicals. You can dim the MC from 0-100% and change the kelvin temp from 3200K – 6500K over Bluetooth using the excellent Sidus Link App or through the tiny side screen.

Of course, you also have full HSI color control and nine built-in effects like fire, TV, party, pulsing, etc. In short, it’s affordable and feature packed and there are many reasons where you’d want more than one while shooting.

Who is the 4-Light Kit for?

A larger 12-light MC production kit seems to be in the works, but the $499 4-light travel kit is the perfect size for me personally and the type of work I do. Rental houses might be inclined to wait for the 12-light production kit for renters trying to fill entire stages with MC’s, but most owners/operators will find the 4-light kit perfect in many scenarios. Of course, you could also buy two additional MC’s and put them in the accessory sleeve and you’d still be able to charge them over the two USB outputs located in the hard case — giving you essentially a 6-light kit though without the full benefits of wireless charging.

The flexibility and size of the MC makes the light itself useful in a wide variety of situations with the possible exception of placing in bulb sockets. For that, Aputure is coming out with an entirely separate product called the AL-RC lightbulb that we touch on in the bottom portion of THIS article.

For travel shoots, the 4-Light Kit is small enough to ship ahead or carry-on (given the internal batteries) and everything is compact enough to make it an easy yes decision when deciding to take up room in your vehicle for a shoot. Would it be great if the wireless charging pads charged all the MC’s a bit faster? Sure, but the kit makes transport and keeping track of the accessories so darn convenient that you’ll likely find it easy to manage any charging time quibbles.

What do you think? Does the 4-light MC kit seem like a good choice for your usual projects? Let us know in the comments below!