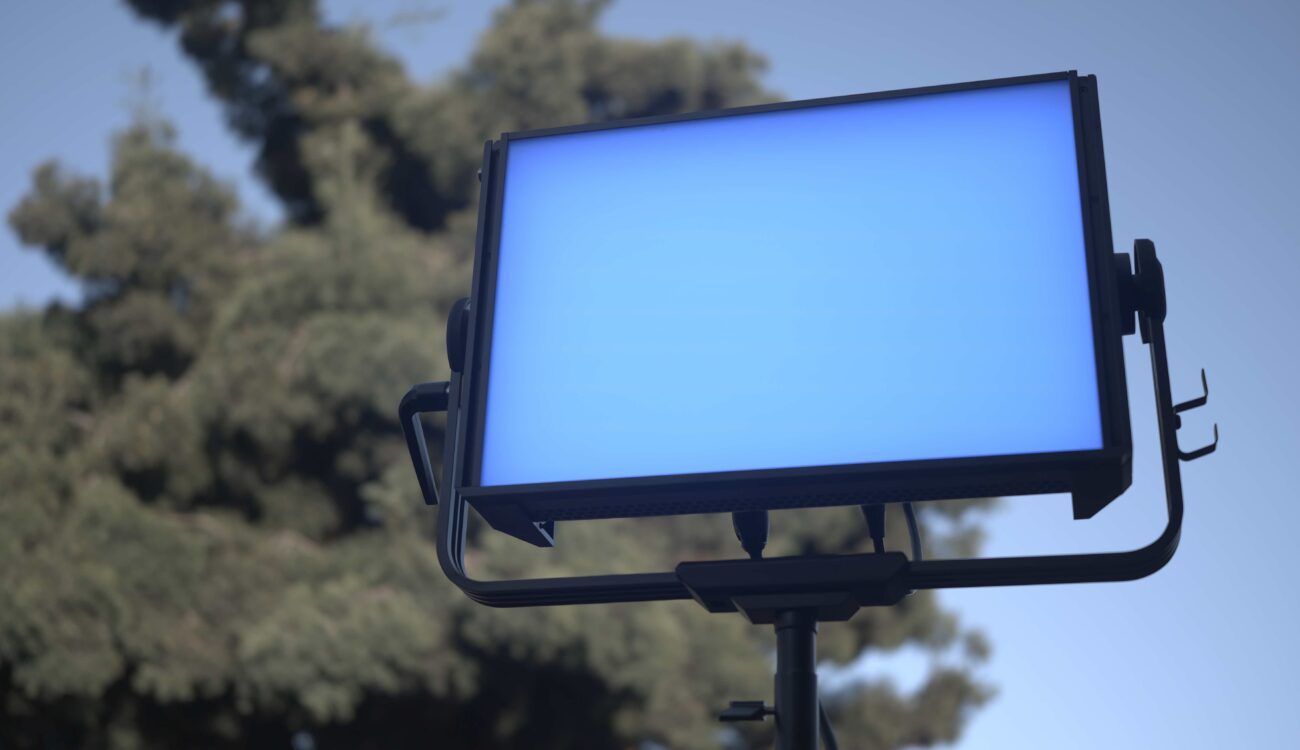 We’ve seen hints of the NOVA P300c LED panel at NAB’s past and the fixture has seemed like a promising entry for Aputure into the crowed LED panel lighting segment. Now, we’ve finally been able to get our hands on one for a review. At $1,699.00 for the fixture alone and $1,899.00 for the kit, the NOVA is sitting at a mid-range price point, but with features that many more expensive panels also share. At different points, over the course of several weeks, I put the NOVA P300C through the paces alongside several of its competitors. Read the full review below.

As I alluded to earlier we’re seeing a whole range of color capable LED panels being released one by one and, for the most part, there are lots of similarities. Most offer DMX and/or Bluetooth control and most give you CCT mode with color control along with some variety of built-in gels and effects like lightning and fire — standing out in this space is tough. Aputure, with their NOVA P300C, isn’t reinventing the wheel here, but they have built an impressive LED panel with a great dollar to output ratio in an affordable (comparatively) kit.

I have a few personal rules of thumb when it comes to acquiring a new light: it needs to work on many different types of shoots and not sit on the shelf, it needs to be easy to control for any crew member and not feel like a burden to haul it into the field and, ideally, it pays for itself over time — whether through kit fees or elevating the look of the cinematography overall. When a light sits on the shelf and doesn’t make it into the field then something needs to be reevaluated. During my time testing the NOVA P300C I took it everywhere — a very good sign.

Or, alternatively, you could go for the $1,699.00 version that doesn’t come with the rolling case. Personally I would also consider adding the $149.00 Aputure Softbox accessory built for the P300c Nova. Other brands like DoPChoice and TRP Worldwide also provide softbox accessories for the NOVA, but they seem to be generally more expensive.

The first thing you’ll notice when taking the Nova P300c out of the rolling case (if you get the kit) is that despite the small dimensions the full kit is on the heavier side. With the case and accessories, you’re going to hit an overall weight of 54 lbs for the kit, but the Nova P300c fixture itself weighs just 22.8lbs. Depending on the airline this might force you into paying more if you try to check the light, but you’ll also need to keep the weight in mind when working with small crews. For comparison, the ARRI Skypanel S60-C weighs in at 26.5 lbs, and the Litepanels Gemini 2×1 is rated at 22.7lbs.

I was surprised to see that the P300c also doesn’t have a gold or V-mount battery plate option. This also might make the light as a whole less appealing to small run & gun crews, but I’m always personally near a generator or wall power, so not a deal breaker for me. You could use an expensive block battery, but fingers crossed that it’s possible for Aputure to make some type of smaller battery option available as an accessory in the future.

UPDATE* – Aputure is working on a 2-Bay Battery Power Station that will take two V or Gold Mount batteries and covert it to 3-pin XLR 48V DC. Pricing and availability is still TBD, but the manufacturer says release of the Power Station should come within “the next few months”.

The Nova P300c feels generally very solid and also seems like it can take a real beating during the course of normal production. A metal bracket handle on top both protects the fixture from impact and gives the user a solid lifting point. In fact, my guess is that a tradeoff for the overall weight rests squarely with the build quality — sure, it’s on the heavier side, but it feels like the Nova will last for years because of the build materials in play here.

I touched on the price of the Aputure softbox previously ($149.00), but mounting the softbox is a breeze and the design itself is well thought out. Simply affix the metal frame to the light and pop the four ridged wires in place and you now have a soft source. Currently, the softbox only comes with a single piece of diffusion and it would be great to see a wide variety of sized diffusion options available in the future. The softbox also includes (usually an additional cost) a grid attachment to narrow your light beam, which is similarly easy to use and helps keep the output from bouncing all over your location.

Many of the design improvements found in the MK II generation of Aputure lights have found a place with the Nova in the form of the back fixture and stand clamps and even the sturdy left-side yoke that doesn’t slip at all as you tilt the fixture. You can mount the controller unit to the back of the fixture itself using a 2′ cable or you can place the controller on the stand with a 9.8′ cable — either option works fine and it’s nice to have both lengths of cable and a stand clamp included with no additional charge.

You have several different modes available within the controller such as:

Gel – A variety of popular gels can be programmatically applied.

Beyond different lighting modes you of course can also change intensity, saturation, and even green/magenta shift (helpful for matching existing environmental lighting). You can also set different presets and navigate to them quickly with the preset 1-4 buttons on the front of the controller. While these are mostly features we’ve seen available in other more expensive fixtures everything in the P300c Nova has a certain level of polish and navigating through the controller is quick and painless.

You can update the firmware through the USB port using a flash drive and you’ll want to occasionally check HERE for future available updates.

We’ve discussed the Sidus Link app at cinema5D before and you’ll find connecting and controlling the Nova through 5.0 Mesh Bluetooth to your favorite mobile device to be a useful control method. Also, you’ll have DMX control available too through the DMX512 port at the base of the controller.

I took the Nova P300c into the field for a quick commercial shoot recently and you can see some of the results below. Here’s a still with the Nova + softbox/grid working as a key light from camera right set to an orange color. An ARRI Skypanel S60-C is handling that teal color camera left helped by a few Astera Titan fixtures hidden along the back wall. There are also two Aputure MC’s playing as background practicals mounted to that horizontal pipe at the rear of the room.

I was pleasantly pleased with how the Nova P300c (+ Grid/Softbox) lit our talent: Thea Ulrich. Judge for yourself, but the Nova fit into the scene nicely working alongside several other fixtures from different brands.

We did notice while shooting that the output of the nearly $6,000 Skypanel S60-C had more punch versus the Nova, but it would be a more fair comparison to go head to head with the Nova against the SkyPanel S30-C at some point in the future. I did do a quick head to head output comparison with the Gemini 2×1 from Litepanels on a feature and found the output to be similar to the Nova. Given that the Litepanels Gemini 2×1 costs nearly double that of the P300c Nova this is pretty impressive, though not a fully scientific test on my part.

If you’ve already bought into the Aputure ecosystem with their other Bluetooth controlled lights you’ll find it tough to turn down the Nova P300c. The Nova is meant to be a versatile soft key light that’s aimed directly at the talent or to provide colored accent or space lighting (no gels required) and with that mission in mind in fits in well with the current crop of second-generation Aputure products.

In my opinion, the build quality and output makes it an excellent investment for rental houses or owner/op’s looking for a multi-year fixture that can take some real abuse in the field and keep on cooking. Also, given the cost, the Nova P300c doesn’t break the bank like a few other fixtures in this lighting segment. Two thumbs up!

What do you think? Is the Nova P300c worth the price of admission now that it’s finally shipping? Let us know in the comments below!