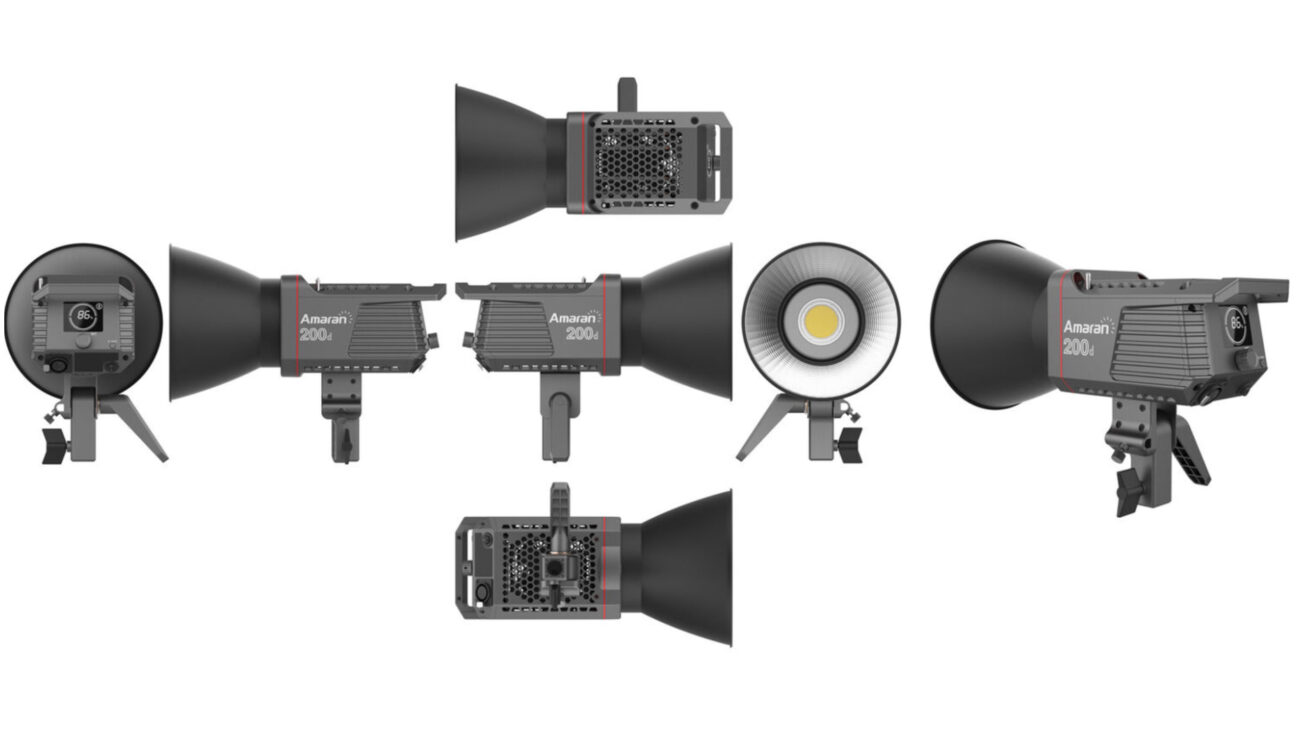 Sporting the moniker that Aputure denotes as a lower-priced bracket lighting fixture, the Amaran point-source line is easy to determine by name; 100 and 200 relating to the wattage of the fixture. D and X relating to daylight balanced and bicolor respectively.

All 4 new lights offer near identical features. Bowens mount on the front, 0-100% brightness control, passive cooled, DC powered but come with an AC adaptor (not to be confused with the large modules of the 120/300D, more on that below). In built umbrella holder for use with stills-orientated lighting modifiers.

Compatible with the new Sidus Link app control and 8-built in lighting effects.

The Aputure Amarans do not require a large control unit, there is a built in wheel on the back of the fixture for brightness control (as well as color on the X variants), and just a standard external DC to AC adaptor. All four fixtures are quote to have a rating of CRI 95 and TLCI 95.

The D versions are rated at 5600K and the X counterparts are billed to range from 2700-6500K. A battery solution is mentioned but not supplied, expect this to be a separate unit that replaces the DC/AC adaptor.

The biggest difference people will take away is naturally the price. Sub $200 for the Aputure Amaran 100D, meaning they are less than half the price of the 120D.

The next most significant is probably the control unit, or lack of. The 120D and 300D both require a control module that enables DC/AC conversion, battery plate and control options for the fixture.

The Amaran simply has a regular DC/AC adaptor, making the whole package much more compact.

Fan cooling is swapped out to passive cooling on the Aputure Amaran; time will tell how this affects performance.

The construction is slightly different. There is no yolk, instead the mount is built into the light fixture. This again adds to keeping things compact, I would also hazard a guess at saying it makes it a less robust unit, particularly when attaching large accessories to the front.

Data sheets will no doubt come with time, for now all that is published is a flattering-for-any-lamp figure of lux ratings at 1 meter: Up 65,000 lux for the 200D and up to 39,500 for the 100D, both with Hyper-reflector (X counterparts slightly less).

Aputure are really starting to develop a full range of LED fixtures in their line, these will no doubt be most suitable to owner operator filmmakers that strive for cost-effective solutions.

But they could also be useful for propping up a large LED lighting package. You can pre order now, links below. Shipping is expect next month.

What do you think, is one of Aputure’s lights already in your bag? Share your thoughts int he comments below!