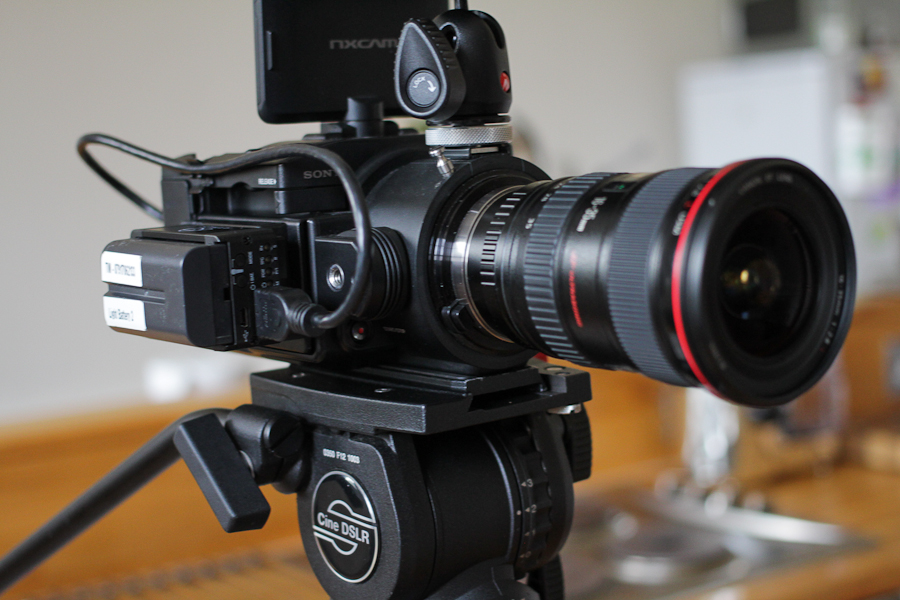 Early this year, Atomos released the Connect SDI/HDMI convertor. It’s a portable convertor that comes in two flavours – the Connect H2S (converts HDMI to SDI) and the Connect S2H (converts SDI to HDMI). It’s a fantastic little device, and has been somewhat overlooked since its release earlier in the summer.

Now, there are a few products out there that perform the conversion task, but the majority are not portable. Despite being small devices, most require AC power. This immediately bumps the Atomos Connect towards the top of the list for fieldwork. But Atomos didn’t simply just add a battery; this is a well-designed bit of kit that’s made to fit seamlessly into any professional workflow that requires this conversion. Let’s first look at the power options for this convertor:

It runs off the popular Sony L series batteries. It’ll run off the Sony NP-F570 (one of the smallest in the line-up) for just under 10 hours. Use it with the NP-F970 and you’re in the 20-30 hour region. It ships with an unbranded NP-F570 equivalent.

It also has an in-built 1 hour battery, so when you run out of juice with your exterior source you won’t lose signal (the device has an LED indicator for when it changes battery source).

It also comes with an AC adaptor. So when you are around mains power, you can simply plug it in. However due to how long it lasts off battery it will be sometimes easier to not bother with the additional cable. It will connect via D-tap also with additional adaptor.

The final point in regards to power (which is a feature I love) is its loop through continuous power. the underside of the Atomos Connect is designed just like a battery: This means you can mount it to the back of an Atomos recorder (Ninja, Samurai, Samurai Blade) light, monitor or anything that takes Sony L series batteries, and the battery will power both the convertor and the device it’s connected to. Both Atomos Connect convertors offer one HDMI port and 2 BNC ports offering 3G/HD/SD-SDI. With the H2S the HDMI is an input, and the SDIs are output. The S2H is vice versa. Both also have a USB port for firmware updates.

Touching on a few of the Atomos Connect key features:

For me, one of the greatest features this device has over other convertors is going back to it’s battery mount design, and how well this can be utilized in conjunction with the Sony FS100.

The FS100 lacks SDI, it’s one of the key features that superior FS700 has over it’s smaller brother. With the Atomos Connect H2S you can offer this output via the HDMI, and with the battery mount design you can offer this up as an almost on-camera output. Here’s how:

Buy a generic Sony L series charger. All these chargers come with a removable sledge (to keep the charger element universal). The FS100 on the dumb side has a removable plastic blank, which is reserved for the expensive proprietary FMU recorder pack (SD cards are fine for this camera). Screw the charger sledge directly to the plastic blank (I had to sand down the sledge slightly in order for it to fit on the Atomos Connect). Simply Attach the Atomos Connect to the sledge, and attach the whole unit back on the camera This produces a fantastic compact mounting solution for the device. What’s more when you’re not using the Atomos Connect, simply remove it and you can rest a spare battery in its place for the camera (the FS100 takes the same Sony L series batteries). The Atomos Connect H2S, and Connect S2H are available from B&H for $295, which when compared with other professional convertors are very well priced. Not only is the H2S the perfect accessory for the FS100, but would go nicely with a Canon C100, 5D mark iii or Nikon D800. With a simply battery sledge to hot shot mount, you could mount it to these devices just as gracefully.

What’s more, it enables you to use the Samurai Blade with any of the mentioned cameras; offering you monitoring, recording and converting capabilities from two devices that bolt seamlessly together and power from just one battery.