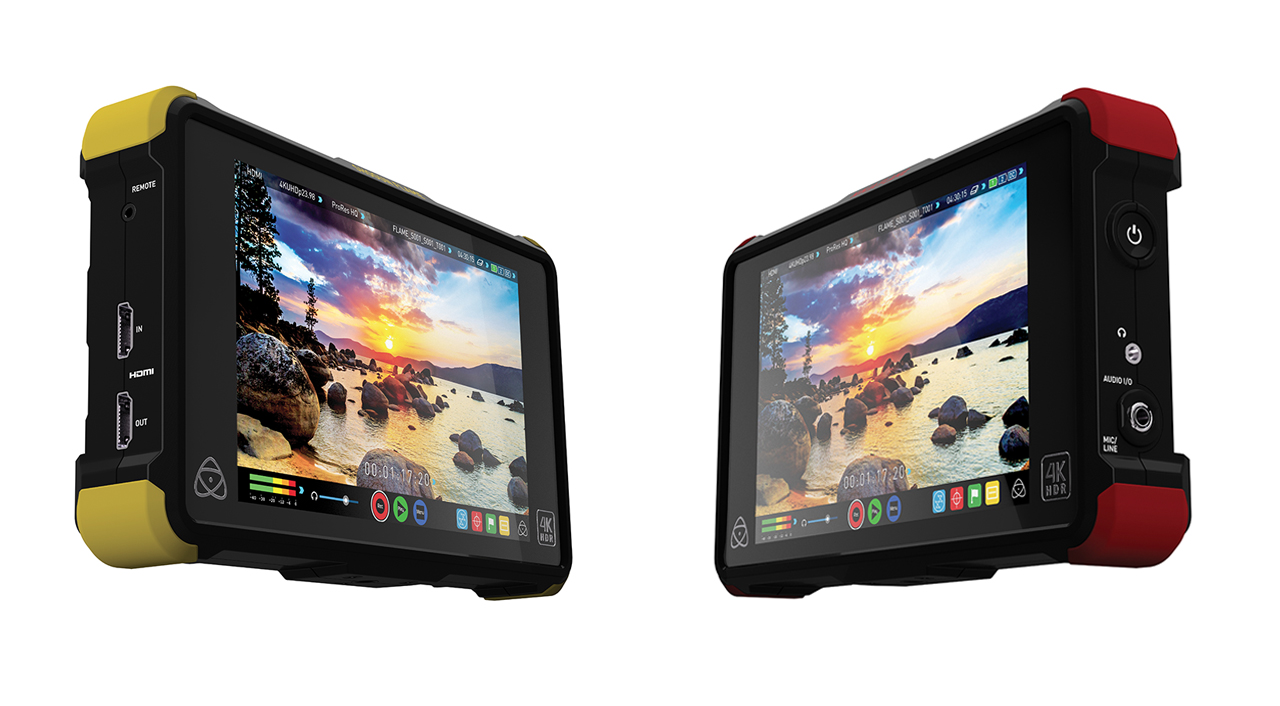 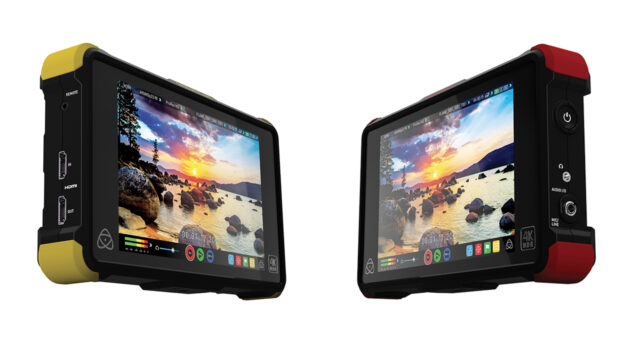 Atomos has announced its next generation of monitor recorders. The Atomos Shogun Flame and Ninja Flame arrive in a more robust, dual battery form sporting 1500 nits of brightness and new 10-bit processing.

Slotting inline with the existing Atomos line up, the yellow branded Atomos Shogun Flame is the flagship model supporting SDI, HDMI & raw whilst the red branded Ninja Flame is the cheaper HDMI only version.

So, what’s new with the Flame line?

Atomos has jumped on the SunHoodsAreSoLastYear trend* and produced their first daylight viewable field monitor. We’ve seen this gain popularity with other monitor manufacturers; it’s nice to see this feature pop up in a field recorder also. Both Flame monitors will feature 1500 nits of brightness. Before you all grab your nit meters, for reference the SmallHD 702 is 1000 nits and the SmallHD DP7-PRO High Bright is 1500 nits.

*A daylight viewable feature is not something that should replace the conventional sun hoods,, just another tool to add to the box, particularly where sun hoods are impractical (when using a gimbal for example)

10bit processing is also now supported. This is an upgrade from the previous 8 bit panels used on the Atomos Shogun/Ninja Assassin and will help with a more accurate display and less banding. Please note, this does not increase the bit depth of your 8-bit camera to a 10 bit one. 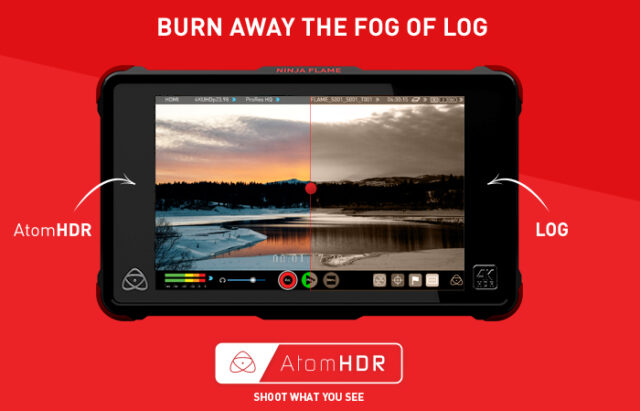 Announcement of the Flame monitor/recorders brings a brand new feature from Atomos. AtomHDR offers a new a way of viewing log footage.

“Activate AtomHDR to resolve the brightness detail of Log camera signals with the color accuracy of HDR images mastered in post production. This means that the usual complications of exposing Log signals on a washed out image (i.e. LUTs for LOOK management but compromise on detail or complicated calibration card and “rule of thumb” calculations) are eliminated – you simply frame, expose, focus and shoot.”

This sounds like a new viewing platform for log recording that operates in a similar way to a conventional LUT, using the benefits of the high dynamic range capture of log and the 10 bit processing of the panel to produce polished looking images on-set, rather than simply converting the image to an existing standard like rec 709. Sounds like this could be a very handy feature for client viewing and, if you learn how this translates to the finished look in post would also be a very good tool for gauging exposure & focus.

Nino had an exclusive presentation of the Atomos Shogun Flame and Ninja Flame at BVE and this does indeed look like an interesting feature: “The AtomHDR feature looks brilliant – it seems a perfect way of displaying the full latitude of LOG footage while actually recording, and this is something I haven’t seen before. It’s a very smart way of using the potential of a high brightness display other than simply being able to have a brighter image when shooting in bright sunshine. You basically see all the detail that is recorded in a LOG image while not having to look at a very grayish image any more, it looks like a properly finished image if you want it to, applying the LUT you want.”

S-log 2, S-log 3, C-log and V-log are listed immediately as supported as well, expect a few more regulars to be added to that list too.

Footnote: It looks like AtomHDR and 1500 nits of brightness will be available as separate features (e.g you won’t be able to view AtomHDR at full, daylight viewable brightness). 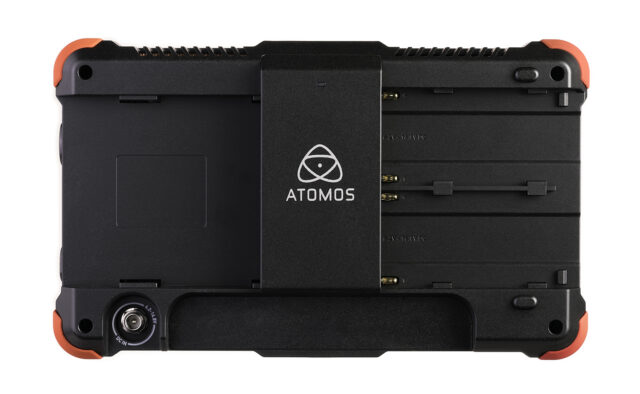 The Atomos Shogun and Atomos Ninja Assassin both had a single Sony NP-F battery slot on the back. Speaking from experience of shooting with these monitors it was a little disconcerting to say the least (The Atomos Shogun is thirsty beast). The new Atomos Shogun Flame and Ninja Flame now support two battery slots and you’ll be able to hot-swap allowing continuous battery power. What’s more, included in monitor packages is a “coiled DC to D-Tap cable for connection to larger battery systems” as a self confessed cable nerd I love the sound of this. 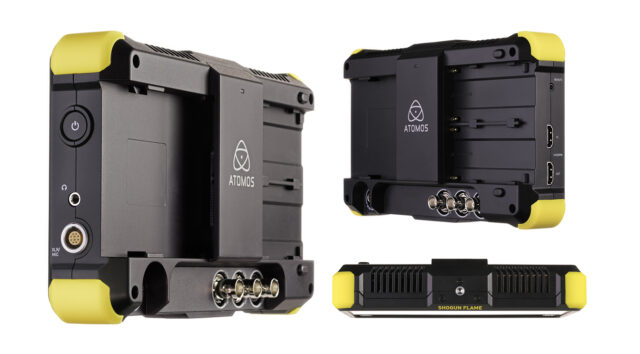 The Atomos Shogun Flame and Ninja Flame will feature a built in bumper design. This offers more protection over the previous naked 7″ panels. An add-on bumper kit was added to the Atomos Shogun and Ninja Assassin, but I felt these were a little clumsy in design; it’s great to see a more robust in-built clad that will no doubt increase the lifespan of the Flame duo in the field.

DC in for both Flame models has been relocated to the rear in a much safer, recessed location. The Shogun Flame BNC ports (SDI in/out and sync) are arguable more recessed also. 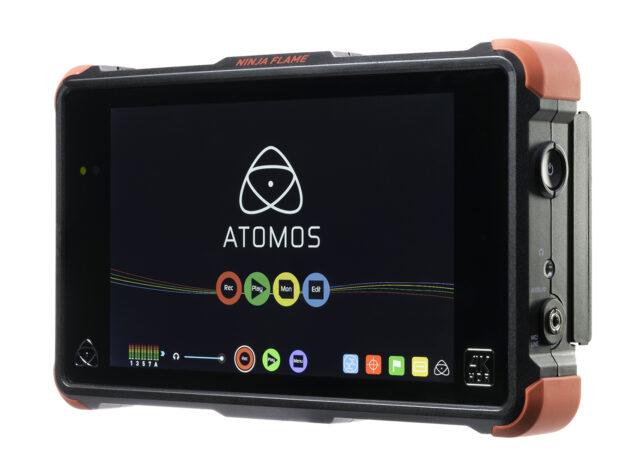 There are many key features that translate from the older Shogun and Ninja Assassin recorders that aren’t classified as new, but if you’re not familiar with Atomos products then may be of great interest to you. 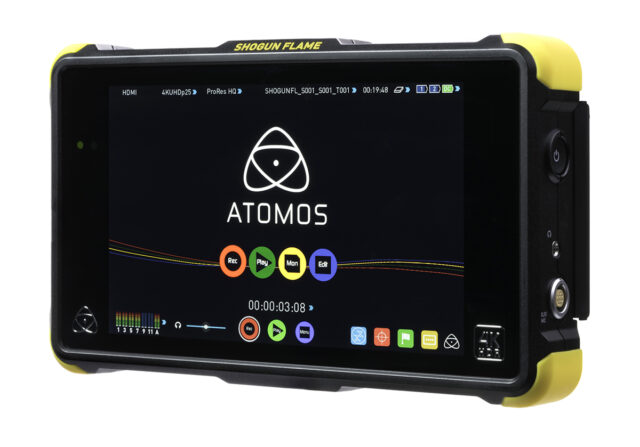 As an operator, I have vast experience in Atomos recorders having owned the Atomos Shogun and Ninja Blade for years and tried out all others within the line up.

I think the new Flame line looks great. One of the big drawbacks for me with the original Atomos Shogun was the power solution – it was far too thirsty, the charger was exceptionally slow and a single battery slot meant you couldn’t hot swap batteries.

The dual battery slots was a much needed upgrade, you can now get continuous power even if they don’t improve the consumption, what’s more the new Flame recorders will ship with a x3 faster battery charger, nice.

I’m not a huge fan of completely migrating to a 7″ panel across the line. My feelings were the same when the Ninja Assassin was announced. The Ninja Blade is a fantastic on-camera form factor with its 5″ display; it’s a shame to not see this with the Ninja Flame, especially as it’s marketed at DSLR and mirrorless systems. I can only assume the costs for designing two completely separate panels were not worth it.

I’ll warmly welcome the daylight viewable display; this was a feature I’ve been looking for a while (particularly gimbal work where a hood is not practical) as well as AtomHDR, which I think will be fantastic for client viewing at the very least.