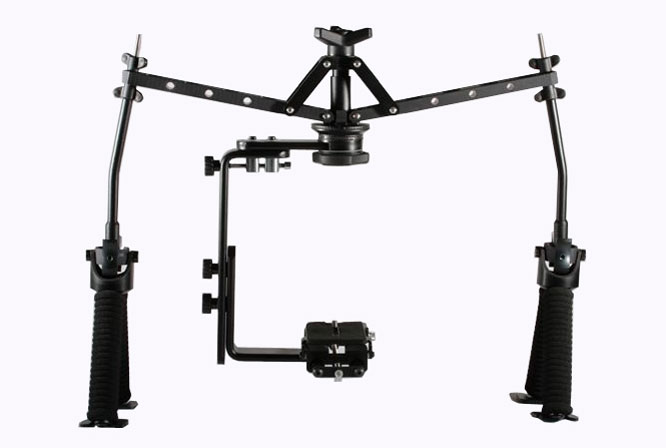 One of this year’s trends at NAB 2013 was clearly camera stabilization. The most prominent example for that trend was clearly the MoVi, a gyro-stabilized handheld system (we featured it here) made prominent by Vincent Laforet through his demo film. However, at §15,000, it is not exactly affordable for indie filmmakers. In comes the Bowens Limelite Omnirig, a very similarly-shaped rig that is also held with two hands. Bowens is a UK company mainly known for lighting solutions, and they demoed the Omnirig through its commercial subdivision Limelite at NAB 2013, looking for feedback from professional filmmakers on how (and if) to proceed with production.

I tried it on the last day of NAB and I was very impressed. It does not have a gyro like the MoVi, it’s a purely mechanical solution – but that also makes it a lot cheaper. I was told the final price hasn’t been decided on yet, however it should be “below 2,000” – $ or £, I missed to ask, but in any case MUCH cheaper than the MoVi.

It worked surprisingly well when I tried it for a few minutes, but there is no doubt that more practice is needed than with the MoVi, which I think will deliver good results much quicker.

Considering the massive price difference, this is a sacrifice that a lot of people are going to be very happy to make.

Check out the impressive demo video of the Omnirig. Beware there seems to be post-stabilization going on in the video, it looks a lot like they used warp stabilizer. Would be nice to see the video without the stabilization applied.

Bowens plan on making it available this summer.

We will of course do our best to get our hands on an Omnirig to be used in one of our real-world reviews.

Single Shot Cinema: Camera flying through the window from 4Film on Vimeo.