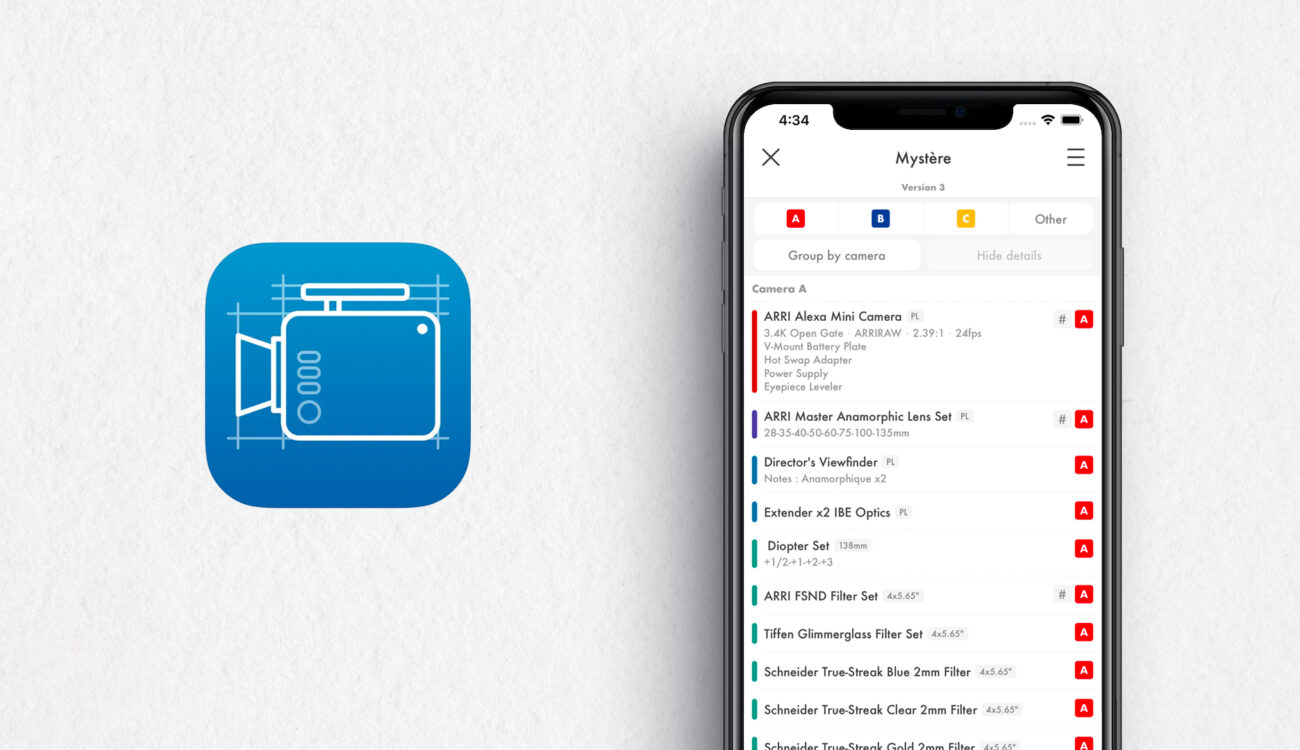 In an open letter signed by co-founder and mobile developer Thomas Albert, we learned that Camlist, the ultimate app for camera prep, is being discontinued. Its successor is currently under development and will be released under the name Cinelist.

While camera prep is a craft on its own, there are a few invaluable resources out there that can help you grasp the basics of this art form. One of these is undoubtedly the 2-hour live training that IATSE 600 Camera Assistant Aidan Gray held last year. We reported about it in this article.

Among the insightful knowledge that Aidan bestows in his comprehensive overview about prepping a shoot, one fact particularly caught my attention: the existence of a mobile app with a razor-sharp focus on the creation of a camera list. That’s how I downloaded Camlist and started playing around with it.

Officially launched in 2019, Camlist is a mobile app (iOS only) that was developed independently for camera assistants by two French camera assistants, Thomas Albert and Stella Libert. The main purpose of this project is to facilitate the process of preparing a shoot by making it more efficient via a series of modern, collaborative tools that go beyond old-fashioned text editors.

The whole app is built around an extensive catalog of gear from a broad range of manufacturers, spanning from cameras and lenses to all sorts of accessories. Also, you can access the inventory of a number of rental houses worldwide without the need of leaving the application.

You can consult detailed tech specs of each piece of equipment, add it to your own project, and receive suggestions about compatible add-ons, thus limiting the chances of forgetting essential accessories. Once you’re done, you can export a PDF version of your gear list to share with your peers, or invite them to make changes through Camlist’s collaboration tools, which include notifications and a versioning system.

The granular level of detail behind this app is quite astonishing. Just to give you an idea, Camlist lets you create labels with lens data that can then be printed and stuck to the outside of your lens case!

Camlist is over, Cinelist is next

Despite its niche focus, the app gained unexpected success over the last few years. According to their founders, Camlist has been adopted by more than 4200 users all over the world and even drew the attention of some of the major players and productions in the industry, such as ARRI and Netflix.

However, not all that glitters is gold, and this prosperity has found a bottleneck in the independent nature of the project. Indeed, Thomas and Stella do most of the work by themselves, from developing the app and constantly updating the database to fixing bugs and providing customer support.

Starting out as a side project, Camlist has literally blown up in its creators’ faces. As a matter of fact, the app has never been optimized for such a large community of users, thus leading to an increasing number of bugs and crashes over the years. Moreover, it looks like the team’s one-time purchase strategy (Camlist Basic only costs €17.99) is not the most viable way for the sustainable growth of their business.

Camlist is becoming a victim of its own success. […] Camlist needs a complete re-write of its source code, its database, and more powerful servers using other technologies for its back-end.

Hence, Camlist is now officially discontinued. While the app will keep working in its current state, the team behind it will solely focus on the development of its successor, Cinelist. According to Thomas, the new app will expand on Camlist’s already-acclaimed features, potentially extending beyond the camera department to include lighting and sound equipment.

You can read the original story and letter here.

Do you use Camlist for your work as a camera assistant? What do you think of the company’s decision to restart from scratch? Let us know your thoughts in the comment section below!