Today we already published a test video of the impressive Canon 5D mark III RAW module enabled by the Magic Lantern hack and a guide to get it working yourself. 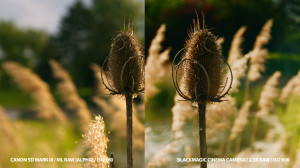 Here’s a side by side comparison of the 5D mark III with 14bit RAW 1080p together with the blackmagic cinema camera with 2.5K RAW so you can see how the two cameras differ. 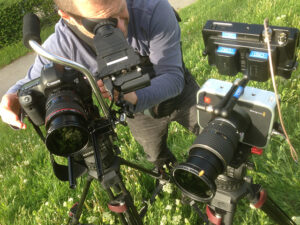 We went out with a Canon 5D mark III that had the Magic Lantern RAW module hack on it and shot with the blackmagic cinema camera in RAW mode alongside.
We used the Canon 24-105mm lens on the 5D while we used the Tokina 16-50mm on the Blackmagic. Native ISO on the Blackmagic is 800 so we used that.

We tried to get similar shots. It’s not so easy, in fact it was easier to get the shots on the 5D as the Blackmagic is just not a very easy to use camera in many regards. Wrongly interpreted zebra indicators had me fooled several times and the internal battery almost died.

Post processing
After a lengthy process of getting the RAW files converted into something usable we graded both to match more or less. We didn’t do a very sophisticated grade, working with RAW files like that is time consuming.

What became clear is that both cameras provide very similarly capable RAW files. You can adjust everything and everything is possible. You can get similar details out of the sky and set all you like in post. Color temperature, tint, dynamic range, no problem. The 5D is just as strong as the BMCC, providing maybe a bit more dynamic range. 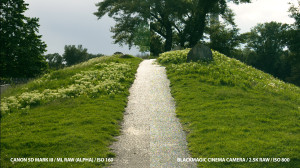 Where the cameras differ in terms of RAW is one big thing: Noise. The 5D mark III can shoot indoors at ISO 1600 and there’s almost no noise while the Blackmagic starts to get ugly at this point.
The noise from the BMCC is also apparent when raising the blacks in a shot.

Moire and aliasing is another big big issue on Blackmagic and there is very litte of that on the 5D RAW. The cleanness of the shots of the 5D RAW in general is extremely pleasing and jumps at you when you sit in front of the RAW images. Check some of the dng’s yourself in our other post.

Conclusion
The 5D RAW has the clear advantage of a large sensor and never before seen ISO performance on a RAW camera. It’s intriguing and soon a stable version will probably be ready for real usage.
On the downside the 5D RAW has a little less detail than the Blackmagic or an Alexa, but a lot more detail than the 5D had without the RAW hack.

We’ll keep you posted on the progress of the Magic Lantern solution.

If you buy a Canon 5D mark III, please get it HERE to reward our efforts and PLEASE ALSO MAKE SURE YOU DONATE TO MAGIC LANTERN FOR MAKING THIS AWESOME DEVELOPMENT POSSIBLE: LINK