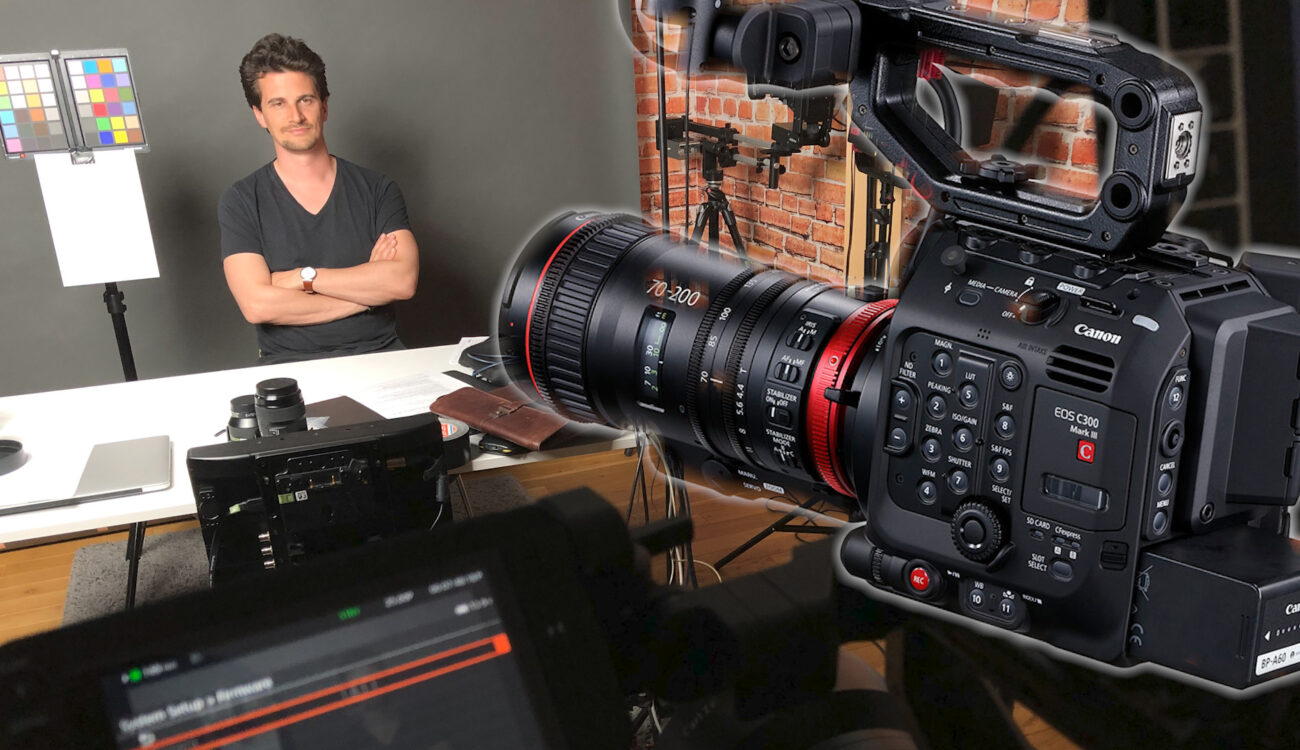 Shortly after the publication of our Canon C500 Mark II lab test last week, we learned that we will gain early access to a pre-production Canon C300 Mark III in our headquarters in Vienna. And of course we had to take an immediate “lab test” look at Canon’s latest Super 35 addition to their line of cinema cameras.

After 5 weeks of home office, leaving my space mainly for only a quick walk with the dog and food shopping, I had to jump at this chance. So I picked up my face mask, greeted Nino from a safe distance and after a quick coffee together (and washing our hands thereafter) we headed straight into this.

Please note that Canon mentioned this to be a pre-production unit, the firmware used was 1.8.1.1 – the final image may change when the camera is released. Nevertheless, we were super interested in getting a lab benchmark for this new camera so here we go! 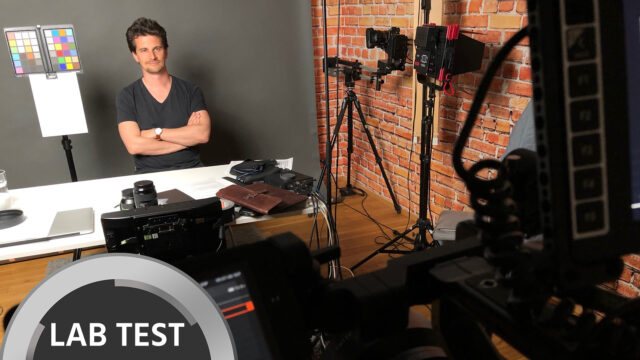 Time was very limited, which is not the best precondition for a thorough lab test. However, as we just ran the C500 Mark II through the lab (see our article here) and we quickly saw that the C300 Mark III shares the body, menu structure and a lot of other features including codecs with the C500 Mark II, we were fast in setting up the cam and decided to focus on 10bit XF-AVC, 4K DCI image acquisition for now (internal raw recording mode is available as well).

Canon claims in their press release that this new Super 35 sensor in the C300 Mark III uses a dual gain circuit to capture increased highlight and shadow detail, which should translate into a very good dynamic range.

Dynamic Range of the Canon C300 Mark III at ISO800

As there was no specific information on the native ISO which should yield the best dynamic range results, we choose ISO800 to run our tests. As mentioned above, the 10bit internal all – I XF-AVC codec with Canon Log2 / C.Gamut (color matrix “neutral”, noise reduction “off”) at a resolution of 4096×2160 at 25 frames per second was used. 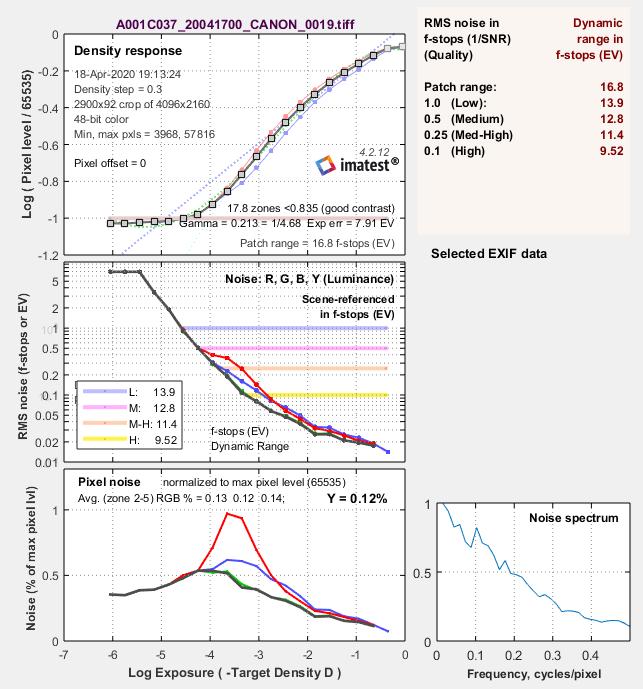 The waveform plot of the Xyla 21 chart confirms this result, see figure 2 below:

At 75 frames per second (4K DCI) the situation changes, as the dual gain architecture of the sensor is no longer active. This can be seen in the waveform plot in figure 3 below – the image becomes much noisier, and around 12 stops can be identified above the increased noise floor:

IMATEST confirms this and calculates 11.6 stops (at a signal to noise ratio of 2, medium value in the graph below) – still, a very good result! 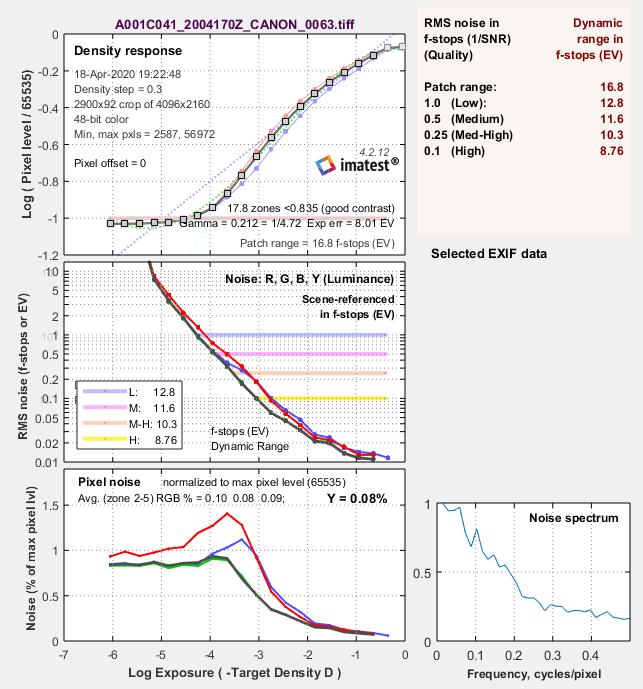 As mentioned previously, we are using a strobe light at 300 Hz to calculate rolling shutter of CMOS sensors.

First interesting result – at 25 fps and up to 60 fps 15.6 ms rolling shutter are measured, see figure 5 below: 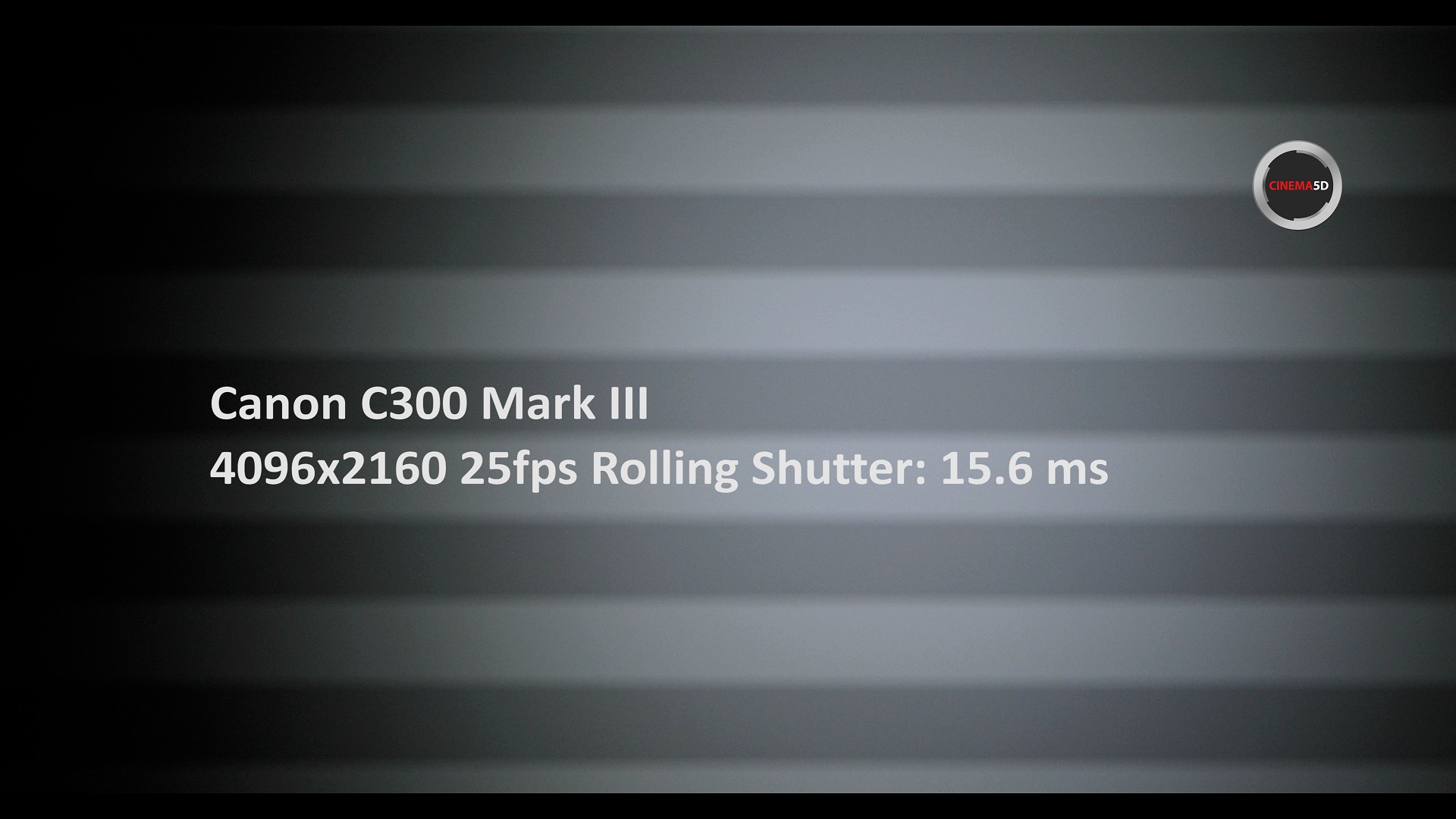 This is a good but not outstanding value for the rolling shutter – other Super35 cameras like the FUJIFILM X-T3 are on the same level, the aforementioned BMPCC6K has 19.8ms.

Obviously, by eliminating the dual gain read out at 75fps and higher, the rolling shutter drops to 7.7ms, see figure 6: 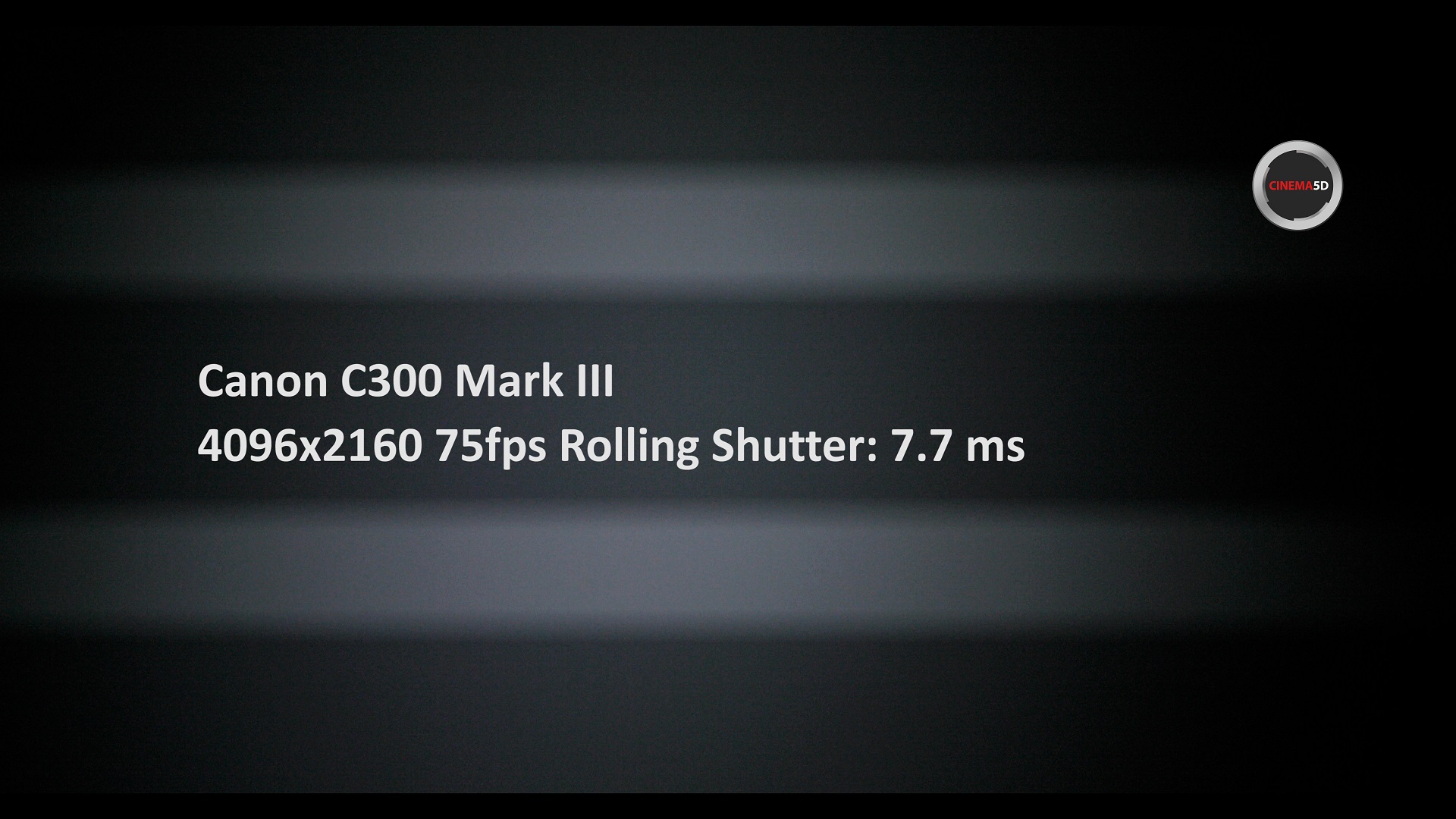 Fig. 6: at 75fps up to 120 frames per second the rolling shutter in 4K DCI mode is 7.7 ms, as the dual gain readout is no longer active at these frame rates

As mentioned earlier, “latitude” is the capability of a camera to retain details and colors when over- or underexposed and pushed back to zero exposure.

In our Lab scene, the zero exposure level represents a base exposure of F4 at ISO800, shutter angle 360° for 25fps DCI 4K. The exposure level is checked by the waveform reading of my colleague Nino’s face which shows a maximum of 60% Luma value, the white sheet of paper comes in at 65%.

Then, exposure is dropped successively to 180°, 90°, 45°, 22.5° and finally 11.25° shutter angle – 5 stops underexposed. The resulting images are pushed back to the zero exposure level in postproduction using DaVinci Resolve Studio.

The good dynamic range results are giving already a strong indication that this test will go well with the C300 Mark III – spoiler alert!

Let’s have a look first at the zero exposure level: 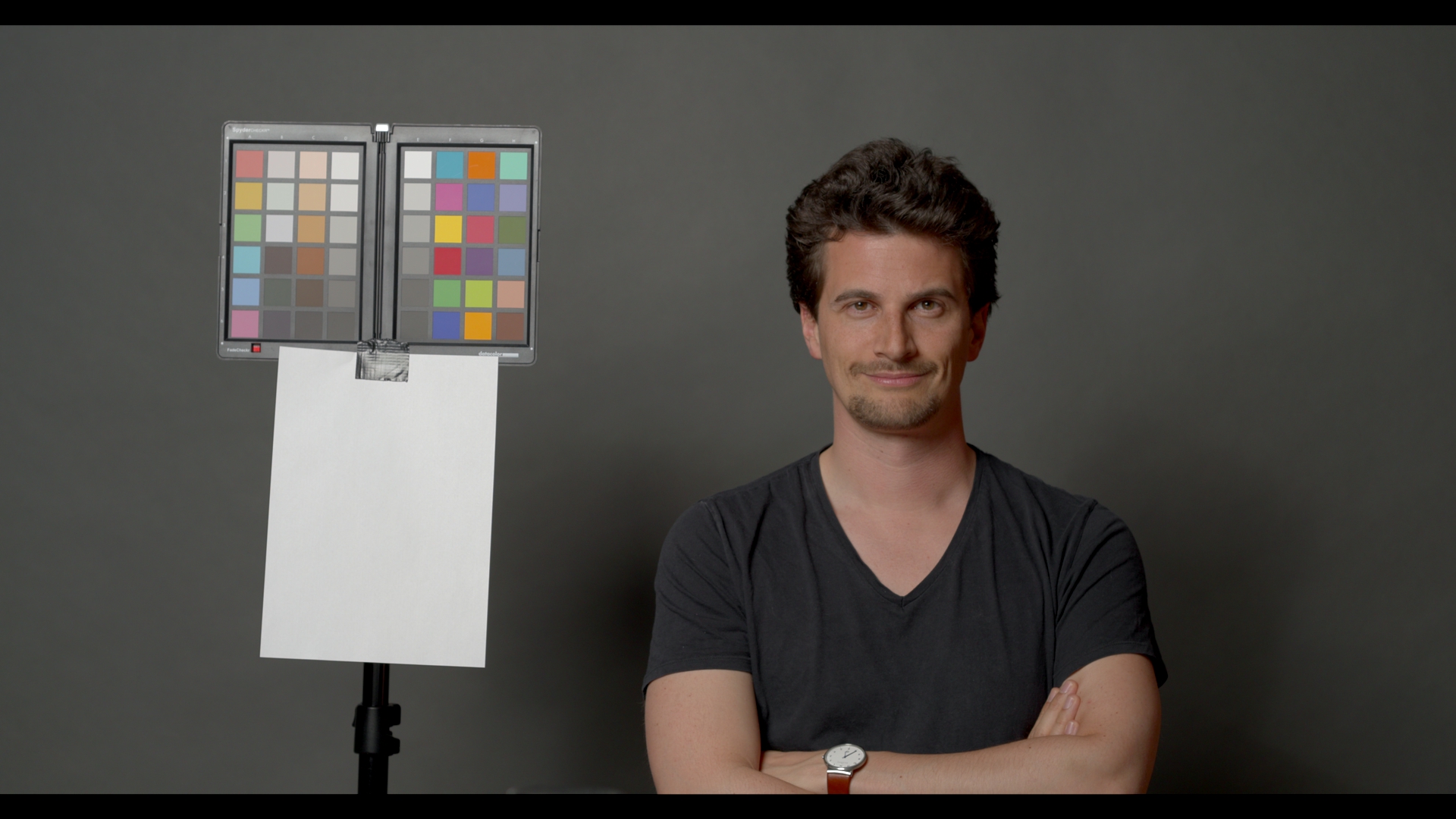 Let’s jump right ahead and have a look at the 3 stops underexposed image, figure 8 below: 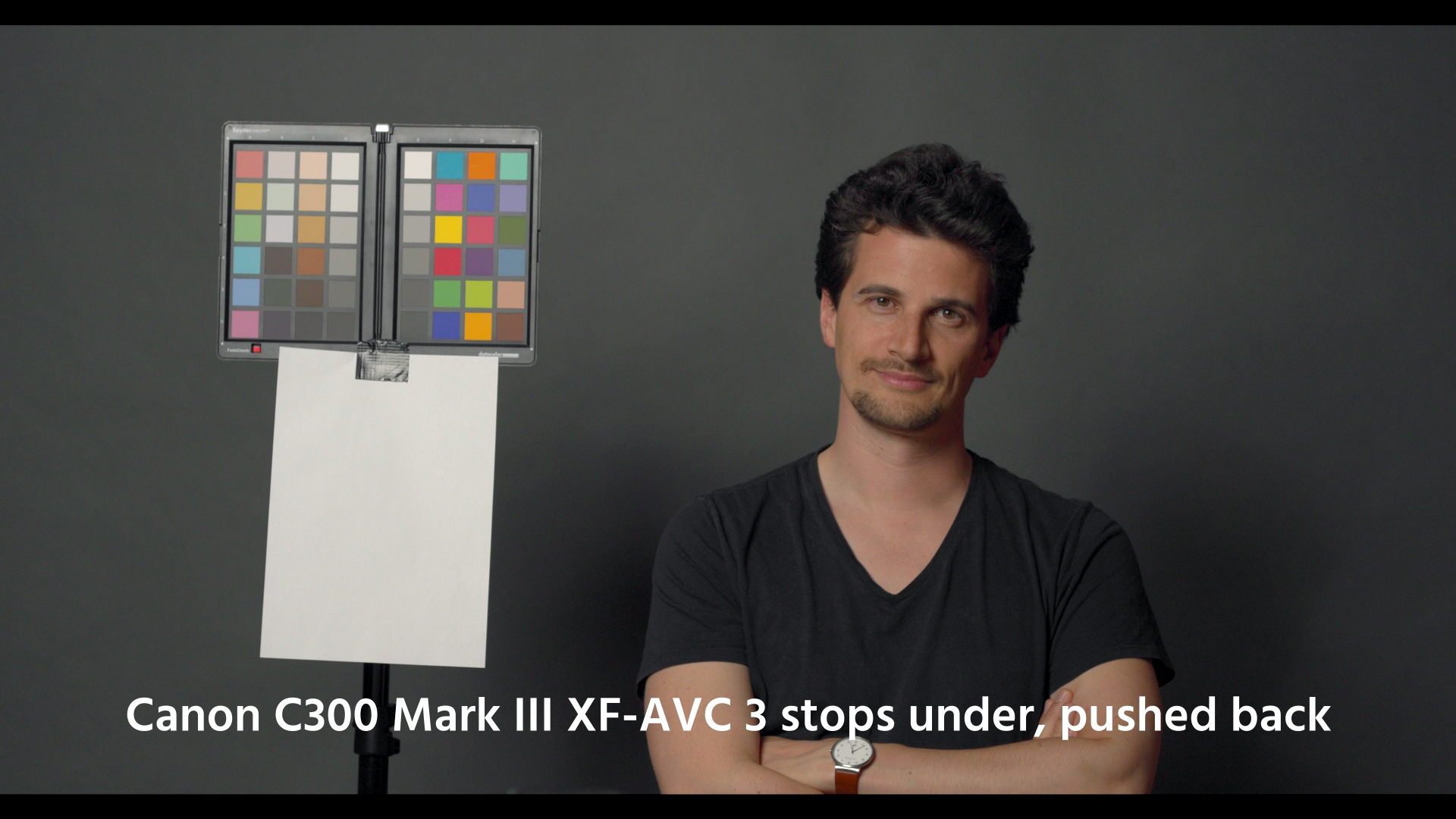 Not much to see in figure 8 above, right? The C300 Mark III behaves very well at this exposure level. The image becomes a bit grayish, and some red speckles of noise start to appear (look at the shadow area below Nino’s cheek). Those speckles can be easily removed by just a bit of temporal noise reduction in post. 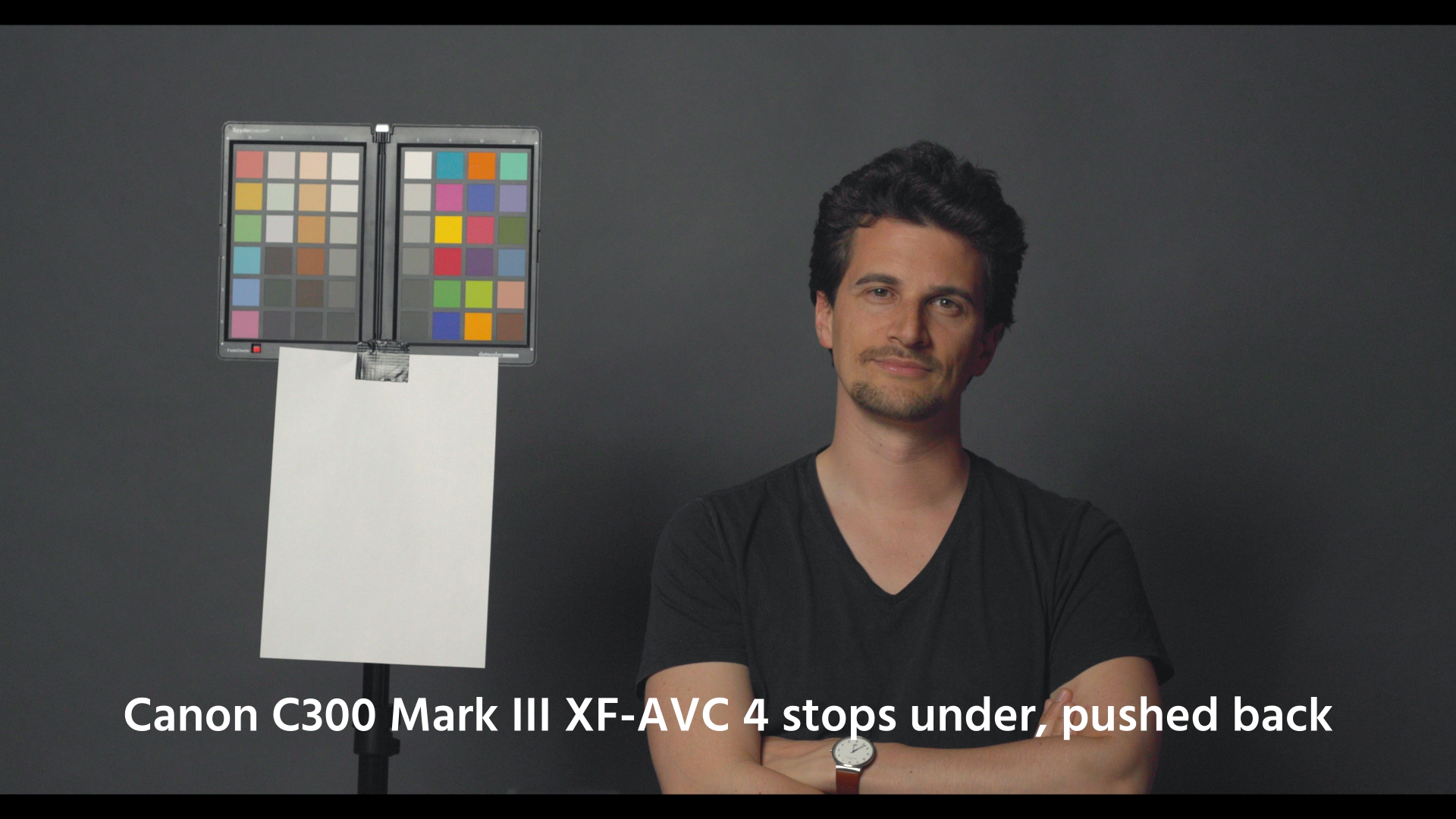 A similar observation holds true for 4 stops of underexposure pushed back – figure 9: the noise in the shadows increases but can be removed quite effectively by just a bit temporal noise reduction. The noise is finely dispersed, like film grain, which looks really good (and is easily removed by noise reduction). 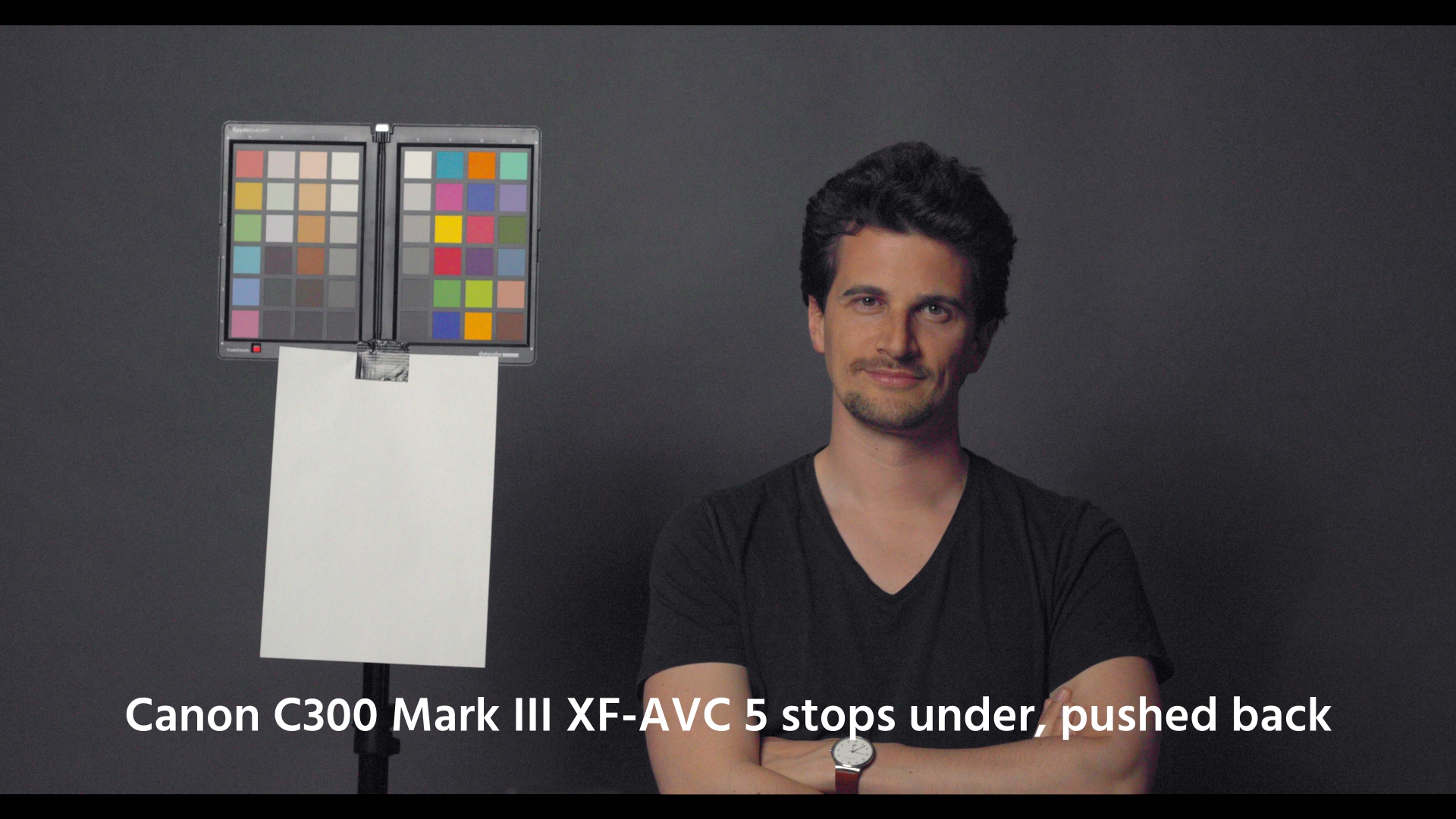 Finally, at 5 stops underexposure, the noise becomes a bit nasty. You can remove this noise again quite effectively in post by adding temporal noise reduction (still no spatial NR needed), but the shadow areas nevertheless have those strong reddish noise speckles, which become posterized areas of red after noise reduction.

But I would say you could still get away with this image, as it does not show those fixed horizontal/vertical lines like all other cameras tested so far –  which are very distracting in a moving image and cannot be removed easily in post. 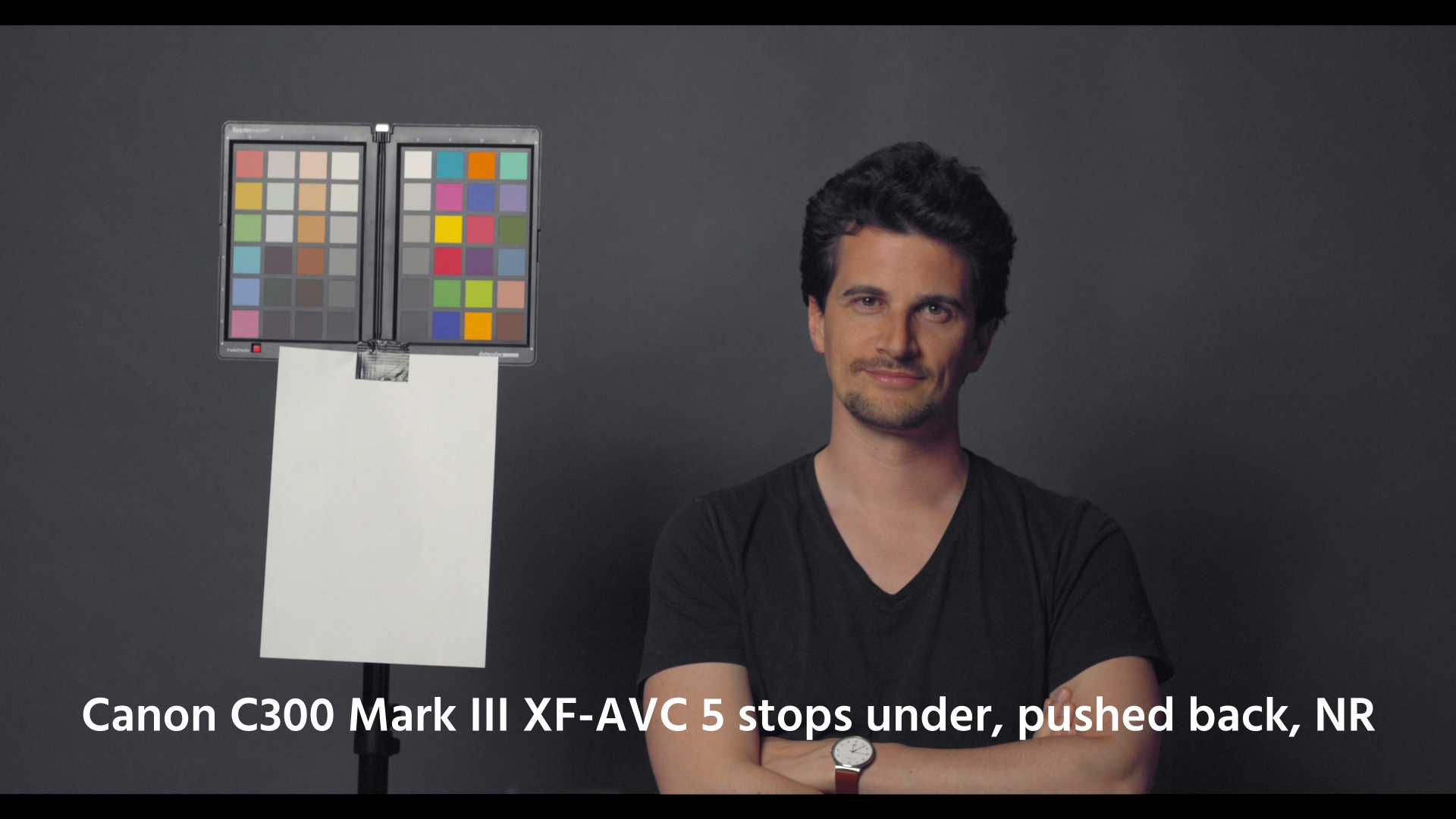 This year Canon surprises us all with their innovative new cameras – the C500 Mark II full-frame camera from late last year already set the benchmark in our lab for a full-frame sensor, and the Super 35 sensor sized C300 Mark III is almost on the same level – a superb lab result, leaving behind all other cameras in this sensor class – with the exception of the ARRI Alexa of course.

What do you think about the new Canon C300 Mark III, do you think it will gain its firm place in the production world after the world opens up for business again? Let us know in the comments below.