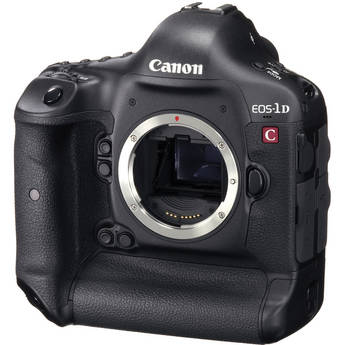 Canon has announced a new firmware update for the 1D-C. Here’s the press from Canon Rumors:

Lens aberration correction with EF Cinema Lenses: Communication between Canon EF Cinema lenses and Canon cameras has had a few effects on the operation of the EOS-1D C. The following features are now available as menu options:

Peripheral Illumination Correction: This feature maintains even brightness from corner to corner of an image. This will virtually eliminate vignetting and any other unevenness of light across the image.
Chromatic Aberration Correction: This feature reduces color fringing in areas of an image with high contrast color. It reduces color bleeding, which is easily noticeable at edges and degrades perceived image quality.
In addition, communication between the lens and camera body will allow the F-stop to now be seen on the viewfinder. Focus position and F-stop will also now be recorded by the camera.
Flicker caused by manual aperture adjustment has been reduced with this update, this could cause slight underexposure which may result in exposure compensation in some cases.

Sound recording with Line input:After requests from users in the field, audio recording through a mini plug (3.5mm) connected to the external microphone terminal is now supported. This will allow for the recording of audio sources other than microphones, such as mobile devices or audio players. The standard input level is -8 dBV and can reach an input signal of up to +6 dBV. Sound recording levels are adjustable at 64 sound-recording levels.

Service support start date is anticipated mid-October 2013. For information regarding the EOS-1D C firmware update (which must be performed by a Canon Factory Service center) please contact Canon Cinema EOS Support at 1-855-CINE-EOS (246-3367) or your local dealer.

As with the previous firmware update, this is a service centre only update, meaning you have to send your camera body to Canon (or authorized centre) for the upgrade.

I like the above phrase “After requests from users in the field”  – Was this feature really top priority from feedback from users? What about focus assist? (peaking, magnification whilst recording etc..) Seems like a case of selective hearing.

What would you like to see from a firmware upgrade for the 1D-C, or any other of Canon’s EOS Cinema line?