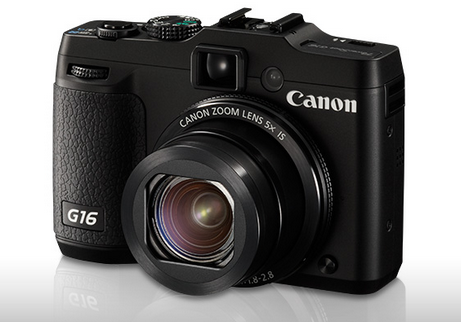 Canon has just released its latest camera in the Powershot line – The Canon Powershot G16.

I know what you’re thinking; this is a fixed lens, small sensor compact still cameras. Why are we talking about it? Well, there’s a few interesting features in G16 specification list that are quite exciting in terms of video. Some that we’ve never seen before, from a stills Canon camera.

There are various upgrades for stills, but I’m just going to touch on the interesting video features this camera offers.

Focus Peaking. This is the only Canon stills camera to support this form of focus support (out of the box), period. An essential feature for video.

Further more to the G16s video upgrades is its migration to an MP4 based Video format using an MPEG4-AVC (H.264) codec with MPEG2 AAC-LC stereo audio. This isn’t big news, it’s a format used in many other video able stills cameras. But from the spec lists, it looks as if it’s a change from the G15 (which like most other Canon DSLRs uses a MOV based H.264 codec). Canon also boasts about its new Intelligent IS With 5-AXIS Enhanced Dynamic IS. Here’s the press on said feature:

Intelligent IS is Canon’s latest unique image stabilisation technology which helps you to achieve sharp images and by combating camera shake, so photos are sharp and detailed even at full zoom or in low light. Intelligent IS constantly detects your subject and adapts the optical Image Stabilizer to the scene from seven available modes: Normal IS, Panning IS, Macro IS, Powered IS, Dynamic & Macro IS, Tripod Mode and Enhanced Dynamic IS.

A 5-axis Enhanced Dynamic IS system powerfully compensates for both handshake and user movements to ensure spectacularly steady, smooth and clear movies when filming from a moving a vehicle or walking.

Like the G15, the G16 also features super slow motion at 120 and 240 FPS, at 640 x 480 and 320 x 240 respectively. Due to the resolution constraints I question the use of these features. However in the consumer market (which is where this camera is placed) it may be a fun feature for experimentation. Like it’s predecessor, the G16 does not have an external mic port. This camera alone surely isn’t going to be winning any awards for it’s video performance. It’s not going to replace a DSLR in your arsenal, and it certainly doesn’t offer anything that competitors aren’t already offering in their stills cameras.

However these are big steps. Canon have proved they are very slow to introduce new features in their line up, and also prove that new features start in their lower end bodies, and work their way up the line up in accordance to it’s success. So it’s hopefully a sign of good things to come. A sign that Canon is finally acknowledging and embracing the necessity for certain video features in stills cameras.

Let’s hope it’s not too long before we start to see theses feature put into practice in their DSLRs (cue: a public partition for 5D mark iii firmware upgrade for focus peaking and 1080 50/60p?!)

The Canon Powershot G16 is available for pre-order from BandH now.