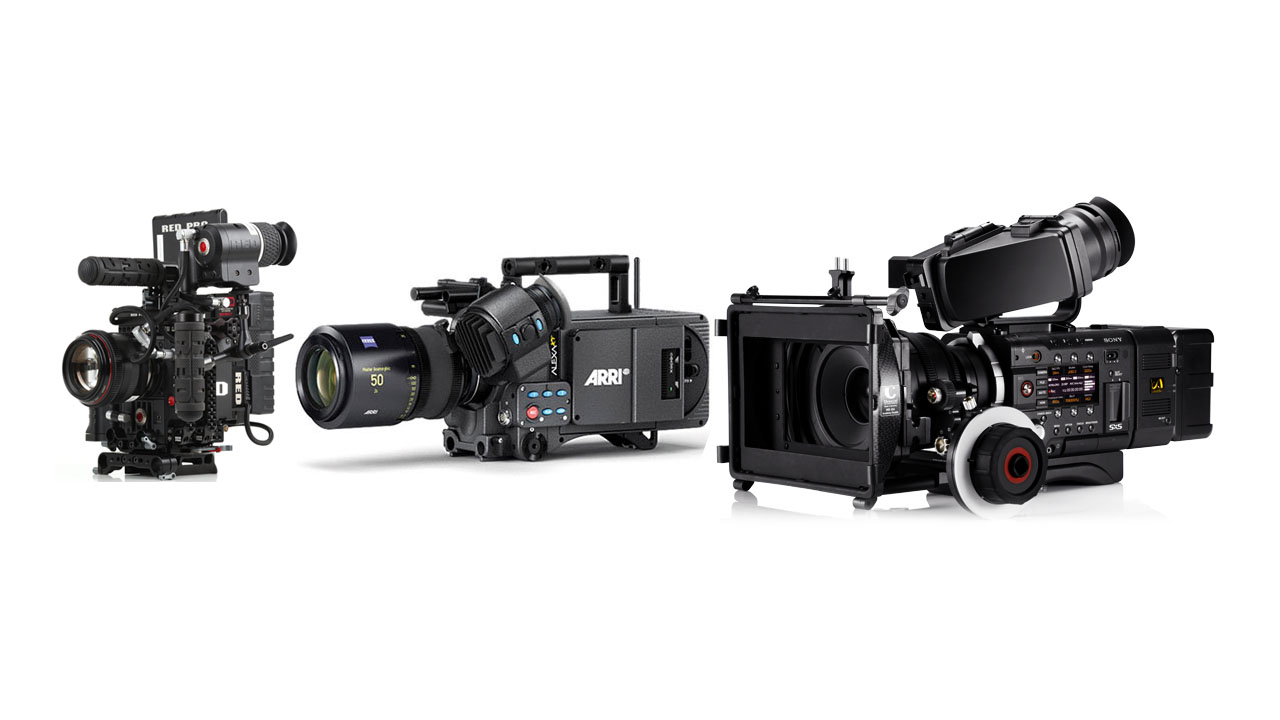 I want to share with you 8 points to keep in mind when choosing a cinema camera. There is no such thing as the perfect camera, and today more than ever it’s about picking the right tool for the job according to the features you need and the budget you have.

Survival of the Fittest

The digital cinema revolution spans arguably over a decade of large sensor technological innovation and evolution. I fell in love the day I saw the first 4K DALSA Origin camera at NAB in 2003, so that’s already 12 years ago. There is much to be said about the history of the technology we have all come to know, love and rely on for our livelihoods, livelihoods many of us have thanks to the industrial upset and disruption these technologies have caused.

What’s of even more interest to most of us is where the technology is headed. Those who apply a bit of strategic foresight can get ahead of the game, and ahead of the pack.

While many of us envision ourselves as cinematic mastermind auteurs, just waiting for that breakthrough that will propel us into the limelight. The truth is most of us are battling each other every day for a edge that will win us run of the mill production work, corporate films and weddings. Disruptive technology has been, and will continue to erode the hourly or daily market value of the average working freelance or self-employed cameraman/editor.

You are not your camera

Let’s face it; there is a huge difference between the work the vast majority of us do to pay the bills, and the work of the Hollywood cinematographers that inspire us so much.

Each one of these variables has the potential to give you an edge above your competition. While a camera does not define or guarantee success; it is a platform on which you can build. If you choose technology that is on a strategic and forward thinking trajectory, you’ll stay ahead of the curve when it comes to taking your experience and creativity to the edge and beyond no matter what you shoot.

When it comes to deciding where to invest when it comes to camera equipment, it’s important to see beyond the shiny packaging and tech specs. It’s not enough to place your faith purely in the court of public opinion either. By all means, spend time on forums, read reviews and study specifications. But that alone is not enough.

We all know who the players are. We follow the every move of Red, Arri, Blackmagic Design, Sony, Canon, Panasonic, and relative newcomers such as Kinefinity and AJA. There is more choice when it comes to large sensor cinema grade cameras now than ever before.

Not all cameras are created equal, and not all who run the race will win.

The fact is, these manufacturers are creating tools for us, and so we, and our work, our needs define the environment that determines their fate.

Those best equipped to survive in our environment are more likely to survive and evolve. Beyond surviving, those who show true innovation can thrive, and in fact exert their own force on the environment itself. A camera cannot be considered alone, it’s part of a bigger picture that exerts influence over, and is at times limited by post production processes, and so post workflow must also be taken into account. Manufacturers who acknowledge, and embrace this fact are already a step ahead of the others. Are three legs better than two? Or four? Clearly not if winning the race is the objective, and as an analogy, a camera built and brought to market with three legs is not going to last very long in the face of two, or four-legged competition. Gimmick should not be mistaken for innovation.

A sure sign that a manufacturer has lost touch with the market is a camera that intends to change the tried, true and accepted norms for its use without good reason, or without following some other major change that is taking place.

Innovation on the other hand is change introduced for good reason, or based on projected insight. Cameras do and should evolve, and while some new ideas may invoke resistance at first, good ideas will find acceptance even if it takes time. One place where you can look to the industry at large is to answer the question who are the front runners? Quite often the answer is obvious, what are the biggest shows and films being shot with? The answer is Arri and Red, and to a certain extent 35mm film is still holding a spot at the top. So then ask yourself, what are they doing right? What are they up to? What are the trends at the top? The age of 4K and above has well and truly arrived, that goes without saying. It’s been coming slowly but surely for many years now. Even if you are still delivering HD, I would argue your acquisition should be 4K at least, and there are viable options that fit all but the smallest budgets. To RAW or not to RAW? While RAW is certainly not right for every job, I would argue it is something you want at your disposal. Again, money is not an excuse anymore to be buying a camera that can’t shoot RAW in camera, or accommodate RAW in an external recorder.

When considering cameras that don’t come standard with in-camera RAW recording, ask yourself why?

Why am I being required to buy an extra piece of kit? Or look higher up the model line-up for features that should now be standard across the board? The answer is you shouldn’t and you don’t have to.

6. Look closely at the model line-up The manufacturers that have a long model line-up to maintain should be asking themselves serious questions. That worked when choices were few and prices were high, but the reality now is quite the opposite.

As an example look at the situation Sony is in with the FS7, F5 and F55. As firmware updates bring the capabilities and features of the “lower-end” cameras closer to their more expensive brothers, the case for shelling out a lot more of your hard earned cash on the F55 instead of the F5, or the F5 instead of the FS7 starts to look thinner.

Looking beyond the cutting edge to what’s really pushing boundaries right now can tell you where things may well be headed for all of us in the future. Sensors are getting bigger. I believe a trend we will see starting now from the players right at the top is a move well beyond super 35mm, beyond full frame, to 65mm. I know DP’s that are already starting to buy up medium format glass and have it re-housed for cinema use. Arri broke ground with the announcement of the Alexa65, and we’ve recently seen that there is a new range of Hawk 65mm anamorphic lenses announced. This is right at the cutting edge, and will not trickle down from the top overnight, but I believe it will happen in time. More than just counting pixels, the demand today is for modularity and ergonomics. These are important aspects to keep in mind when weighing up performance and price of a cinema camera. Is there an upgrade path for the camera? If so does it require sending the camera back to the manufacturer in the case of Red, or can you upgrade the camera yourself like the URSA? Are you locked into the camera as it is, or are there modules that can be added or removed to build the camera for different situations?

A camera should work well for you the way you want to work, and this is where things get subjective. Be realistic about your needs, will a larger, heavier camera body suit you, where the laws of physics and inertia give you some extra stability and smooth out vibrations in your shots. Do you work mostly on a head and legs, or do you work far more handheld? Do you work alone or have a camera assistant and focus puller on most of your shoots? A larger camera that suits a larger crew may not work so well for you alone. Of course this is not always the case. Each camera is different, menus and screens are in different places with different levels of accessibility.

There is no one-size fits all solution

We all have different needs, and thankfully no two cameras I can think of are the same. Each has unique pros and cons, but the important thing is that it’s not just about what’s hot right now. When choosing a cinema camera it’s about seeing beyond… where is all this headed, not only where the demand is right now in terms of the services you provide, but where will the demand be in two years time. What creative opportunities will this technology open up? How can I get in there first?

The answers are right there between the lines for anyone willing to dig just a little deeper behind what’s making the news headlines. Look for patterns and notice trends.

The next time you find yourself blindly comparing specs, or being swayed by opinion on camera forums, try to keep in mind a clear picture of where the technology is headed, and which manufacturers are truly, honestly innovating, moving in a forward trajectory to bring you better tools in the long run.