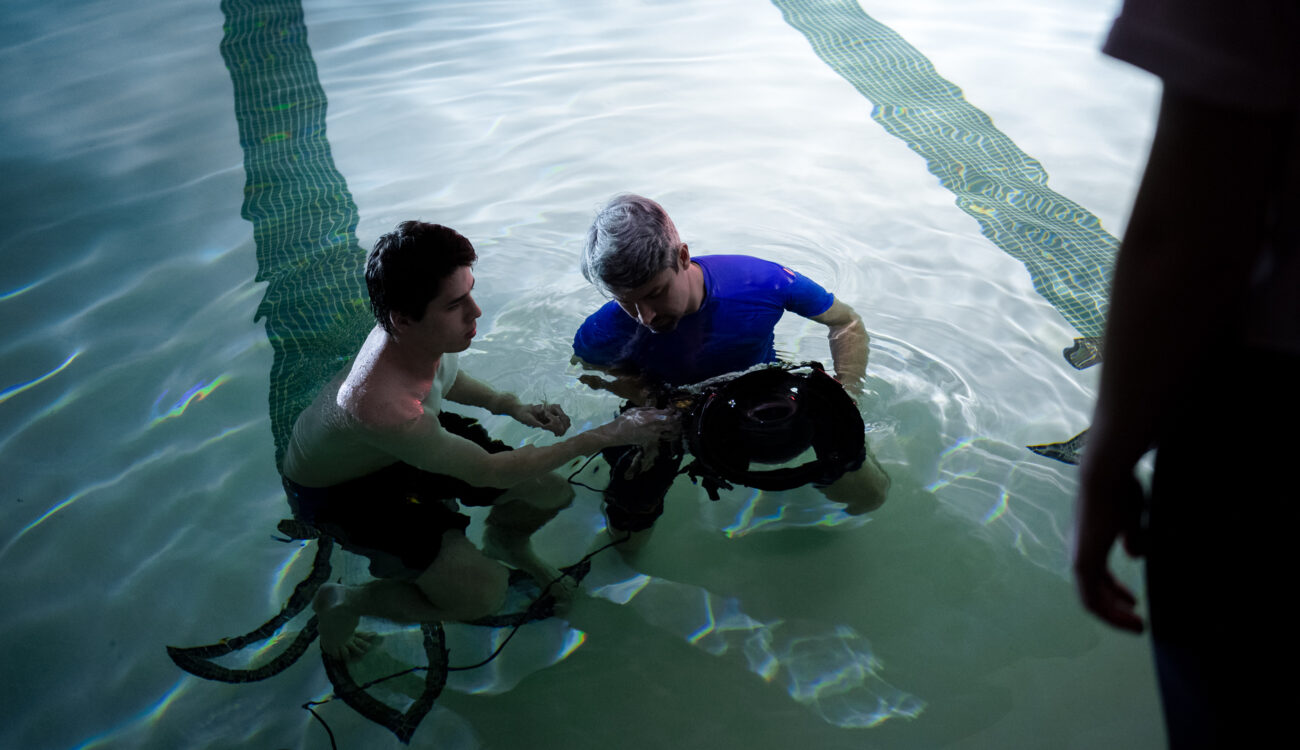 1st AC Tiffany Murray and I (working as Camera Op) recently had the unique opportunity to work with Gates Underwater Products to find a compatible solution for a relatively new camera: the Arri Mini LF. She and I were starting a film in Indiana which contained several complicated underwater sequences (during winter at night) and given that the camera was new, options were limited. As we progressed, it became clear there isn’t a wealth of information online about underwater cinematography in general or how it relates to cinema from the beginner perspective specifically. I’ll be the first to admit I’ve only shot underwater a handful of times so the process of working closely with Gates to build the perfect rig was eye opening. Here are a few things to keep in mind as you undertake the journey towards that perfect underwater sequence:

There are only a few underwater housing manufacturers out there and due to compatibility concerns, it was clear from the start that we’d need to work closely with the manufacturer, Gates Underwater Products, to ensure a smooth ride. Luckily, Gates is located close-by in San Diego county and they were open to working with us to find solutions.

First, let me share what we were up against.

We expressed these concerns right off the bat to John Ellerbrock, President of Gates, and he was up to the challenge. Since 1969, the company has been a leader in the underwater cinematography community and we found their expertise to be invaluable throughout this process.

After a day of prepping at Panavision Hollywood, we took a single lens, follow focus system, and the Mini LF down to the company’s offices in San Diego. This may sound obvious, but for any compatibility check and build out you’ll want as many of the items you’ll need to place into the housing to be physically present in the room. Given the short timeframe, we weren’t able to have the entire kit there (some items were already on trucks), but we had enough to feel good about our testing before flying to Indiana for the film.

Most prosumer underwater systems allow only minimal control of the camera, but with a professional rig you’ll have full access to any external programmable buttons on the camera body as well as power and recording. The design of the housing is intuitive: a small sled accepts the camera and locks it into place with a rear V-mount plate. The exterior of the body provides many mounting points for additional weights (important for not fighting the natural buoyancy of the device while operating) and several spots for cables to enter through the exterior.

Depending on the length of your lens, you’ll add more or less Port Rings (metal rings that stack for just the right length to match the lens). For us, one medium and two small Port Rings proved to be the perfect recipe for fitting the camera body. You’ll want to remember to keep each O-ring lubed up (on the o-ring side) to make disconnecting later on easier. (Disassembling or Decoupling) the Port Rings is also simple when they are connected to the housing itself as this buys you a little leverage.

As we anticipated, fitting a Preston LCS system inside the housing was a challenge (the housing is perfectly suited for the ARRI LCS system, but unavailable to us). After a few hours of tinkering, the team decided to place the MDR motor controller on land and run a cable to the housing to allow for wireless focus pulling. Of course, small 0.8 pitch gears allow manual focus or iris pulling from the exterior of the housing while in the water. Gates Underwater was also able to create a custom cable that ran from the camera out SDI all the way through to an external monitor in video village without compromising the watertight integrity of the housing.

Speaking of watertight — you’ll want to become best friends with the seal check device that ships in a tiny Pelican case. Throw in some AA batteries, connect the seal check hose to the correct port on the exterior and you’ll get a vacuum reading of the inside of the housing. A stable reading in a few minutes means you’re good.  A steady drop in vacuum means you need to double-check everything (including cable entry points) is locked up tight or you’ll run the risk of moisture entering the housing with your $100K camera rig in it.

For monitoring, Gates Underwater picked the Atomos Shinobi 5″ as their compatible monitor of choice with our particular rig. These aren’t expensive to buy or rent and they provide a good-sized image for in-water operating. Keep in mind that the monitor lives in a tiny compartment separate from the main housing compartment and it will need to be seal checked as well. Personally, I didn’t always use the Shinobi on the film as we had a 17″ SmallHD monitor close by at all times. Placed on dry ground, the monitor was connected through waterproof SDI. Though we shot in rivers and pools, this particular film didn’t require us to be fully submerged.

Gates shipped the housing to us several days in advance of the physical shoot day. Sure, the Port Rings were tricky to disconnect as they’d been sitting in shipping for a while and the lubricant becomes less effective, but with some leverage they separated quickly (with re-lube they are super easy on/off).  Don’t forget to unlock the latch that holds them in place.

In the middle of one of our most complicated overnights on the film Tiffany and I took A-Cam (B-Cam was a full sized Alexa LF) away from set and within 45 minutes we were ready, our seal checks were complete, and we were prepared for our scene. You’ll want to keep a close watch on camera battery life as the V-mount battery capable of fitting in the rig is on the smaller side.

As any good member of the camera team knows — planning is your friend. Having enough time during this project was our constant challenge, but identifying the issues and soliciting the best advice helped to deliver success on the day. John, Dale, Pamela and the team over at Gates Underwater assisted us every step of the way and as a result the underwater sequences turned out even better than we could have hoped.

If you can, try to give enough time for the build and go over that checklist methodically. If you have the budget to bring in a specialist, there are many excellent underwater operators available. My hope is, after reading this, you’ll see that with the proper support and time, underwater shots are absolutely achievable both on time and on budget.

The full film won’t be out for nearly a year, but I’ll make sure to update this article with the trailer when it arrives.

Special thanks to Gates Underwater Video, 1st AC Tiffany Murray, and DP Madeline Kate Kann for their help with this article.