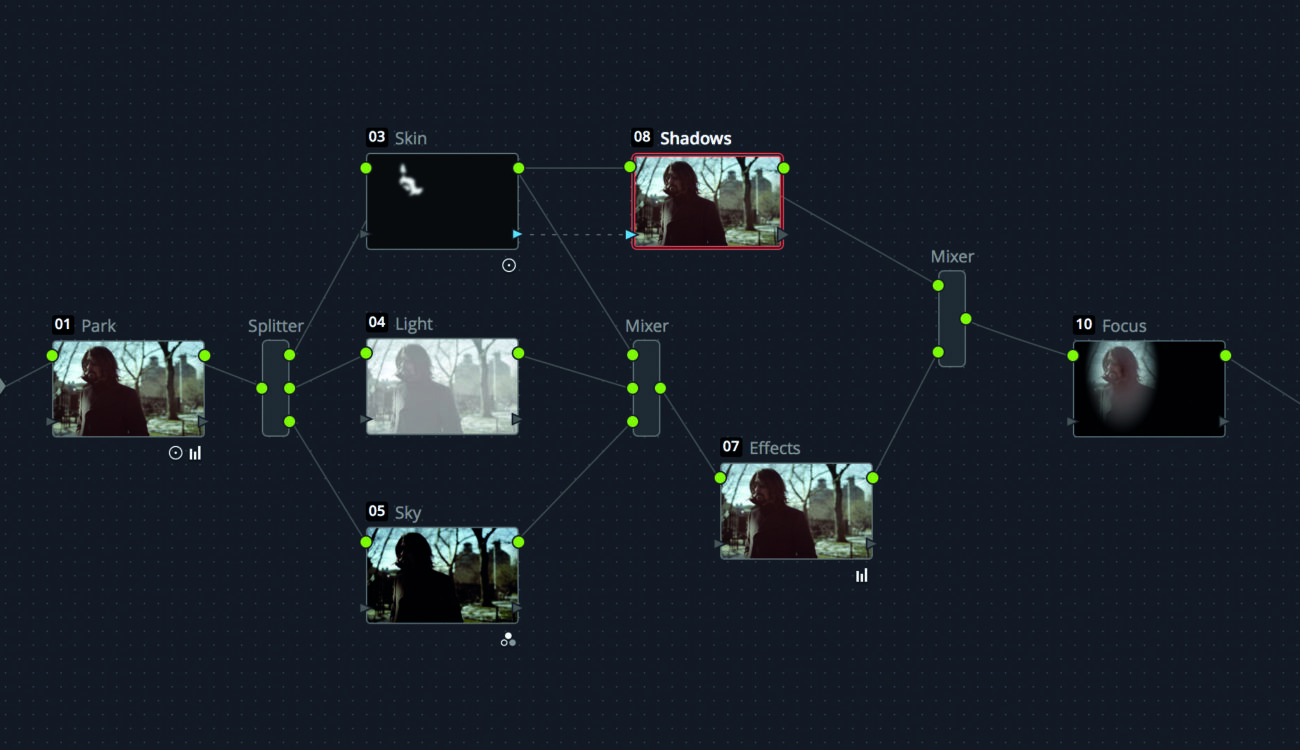 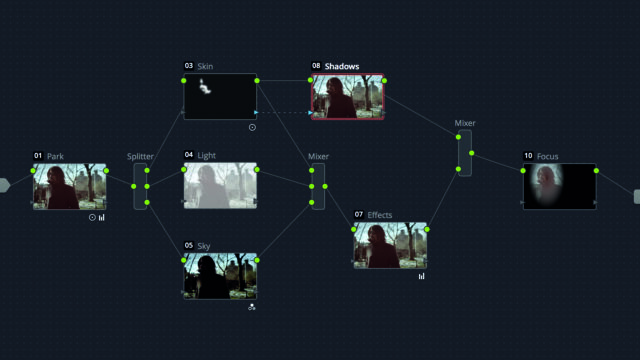 Once you know the different types of DaVinci Resolve nodes, and how they function individually and together, you’ll be able to construct any grade you can envision.

What are DaVinci Resolve Nodes?

A node is a fixed point in the image processing pipeline, a container where one or more operations or functions are applied to a part of the image—or to the whole image itself. A node takes the image information it receives at its input, applies some combination of operations, and presents the resulting image at its output. A node is inherently sequential in its behaviour, making a change and passing the result on to the next node.

By dividing operations up logically, into a sequence of nodes, we can maintain control over even the most complex combination of processes. It is a very powerful way of breaking down complex operations. 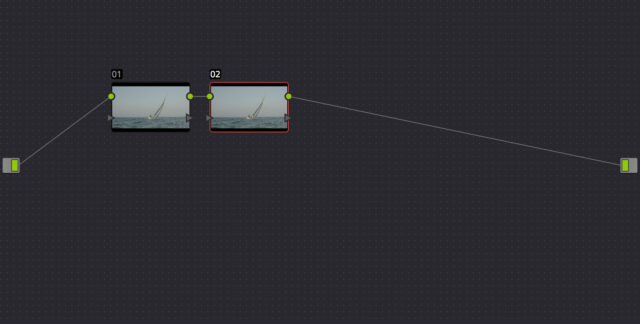 The serial node is the most common and basic node. It is the basic building block on which most functions and operations are assigned. 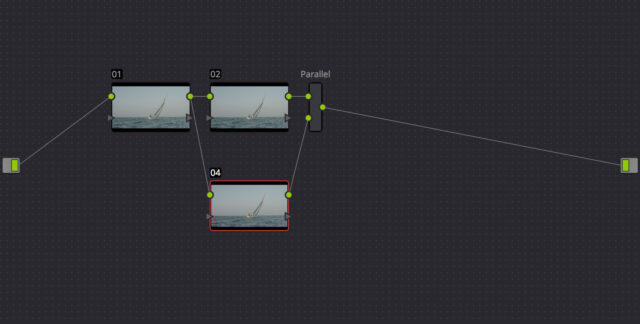 A parallel node is a little more interesting. When you add a parallel node, you will notice a new node appears below your existing node, both sharing a common source input. The output of these two nodes feeds another type of node, known as a parallel mixer node.

A parallel mixer node simply combines the outputs of two (or more) nodes into a single output, regardless of the order they are connected in. 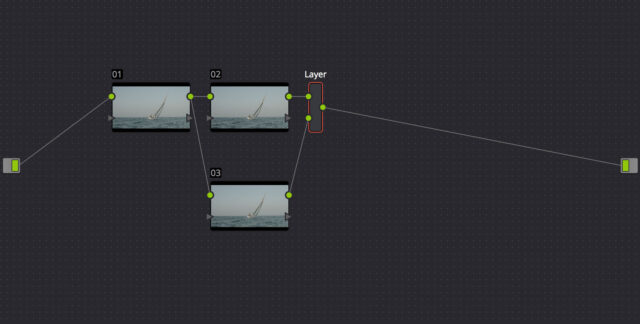 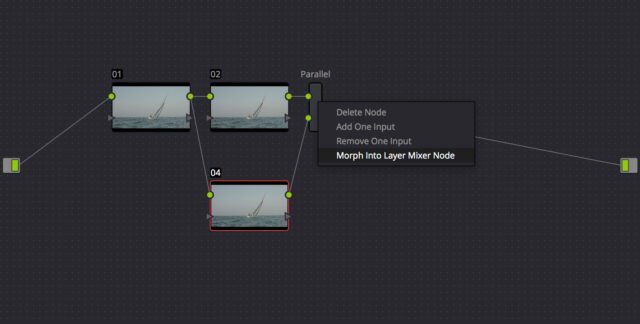 It is important to note that Resolve treats the bottom most connection as the top of the layer stack, this can seem a bit counter-intuitive to begin with but you quickly get used to it. By right clicking the links and deleting them, you can re-order connections by dragging from the parallel node outputs to the desired layer mixer node inputs in whatever order you require. 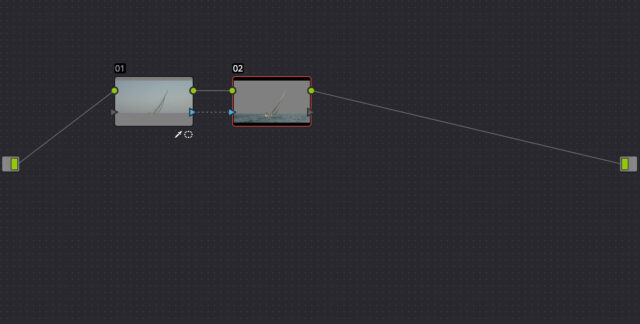 An outside node is an easy way to invert a selection mask into another independent node. This allows you to perform operations to areas of the image, inside and outside the mask, in two separate nodes. You can see here the mask created in the first node uses a combination of a qualifier and power window to isolate the sky (you can tell by the small icons which appear in the bottom right corner of the node), this mask has created a key. In an outside node, both the RGB and key are connected, where the key is then inverted allowing control over the outside of the mask. 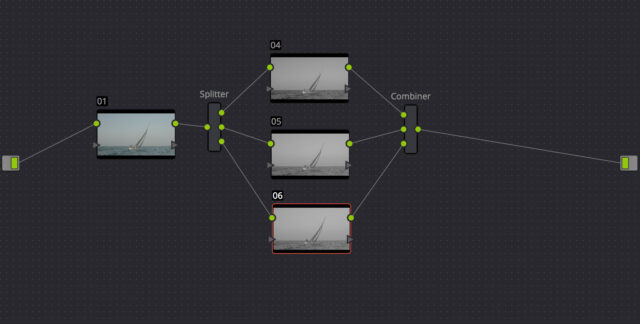 A splitter combiner node combination will split the image into three individual channels, allowing you to operate on them individually before combining them back into a single output. 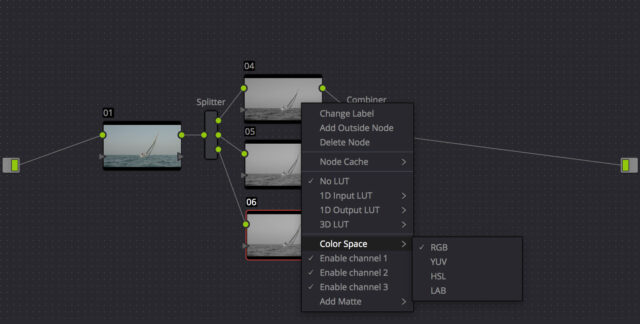 The three individual channels can be split in different ways, as RGB, YUV, HSL, and LAB—and you can enable and disable the channels by right clicking. You can add more serial or parallel nodes into each channel for more complex operations before they are combined.

The best way to learn how to use the different types of nodes in DaVinci Resolve is to experiment with them. The nodes alone only provide structure, a skeleton on which to build your grades, so combine it with various tools and operations using the nodes. Nodes help you isolate parts of the image in particular ways—and in a particular order in your image processing pipeline—to create a final result.

There’s even more to the DaVinci Resolve nodes than I could possibly cover in one post, but this article should get you started—especially if you’re new to using DaVinci Resolve nodes. I highly recommend reading chapter 30 of the Resolve 12 manual, which you can download here.