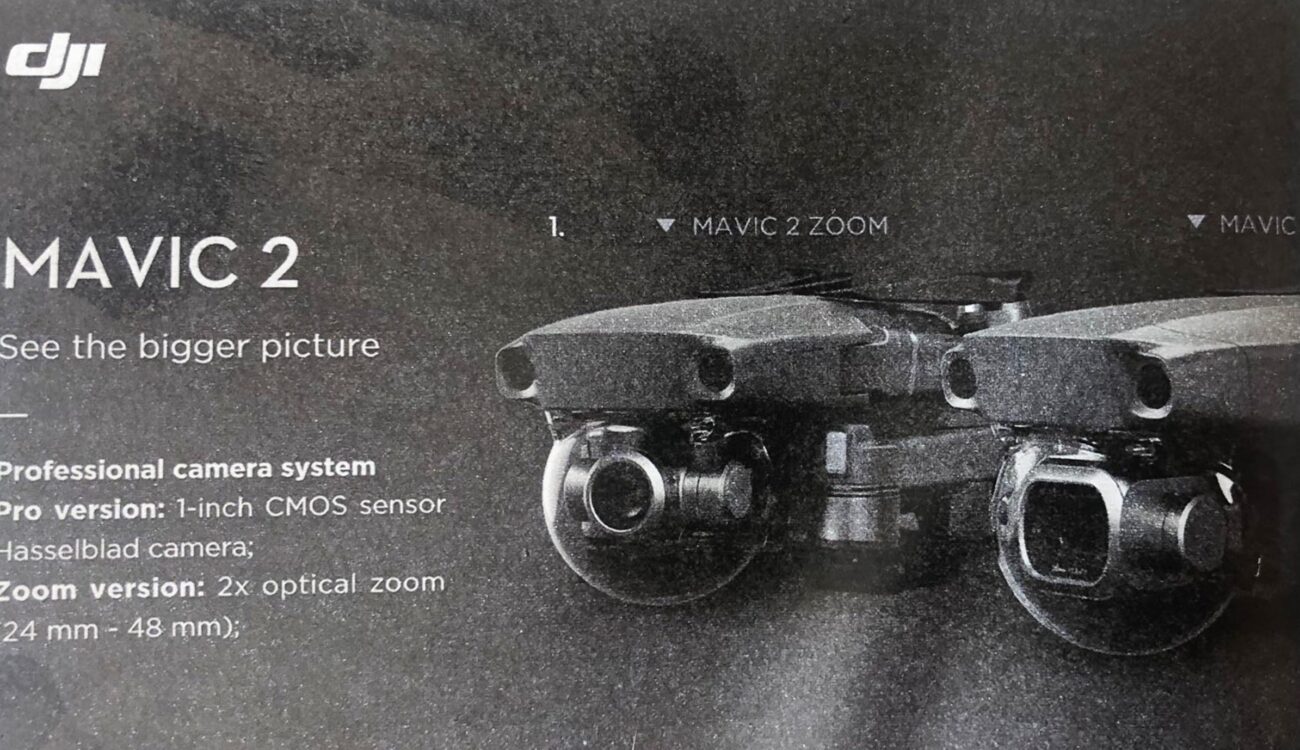 If you’re like us here at cinema5D eagerly waiting for some news on the anticipated DJI Mavic 2 drone, Well, here’s some solid information for you: British digital retailer Argos issued their latest (print) catalogue and in it, alert readers found two brand-new drone models : The Mavic 2 Pro and the Mavic 2 Zoom.

Cinema5D HQ actually received an invitation for an official event that should have taken place during July but this event has been postponed without any alternative date so far. (EDIT: the event is on August 23rd!!) So, now with everybody on the edges of their seats, let’s have a look at what surfaced in that aforementioned catalogue: There will be not one but two models of the upcoming Mavic 2 drone and the difference lies within the actual camera gimbal. The so-called Mavic 2 Zoom will sport a 2x optical zoom (24mm – 48mm) while the Mavic 2 Pro will feature a Hasselblad camera with a 1-inch sensor but no zoom. You will have to decide whether Pro image quality or the flexibility of a zoom lens is your thing.

There’s no word on video recording capabilities. I assume 4K (UHD) recording but the amount of compression and the quality of the codec deployed are yet to be revealed. The gimbal itself doesn’t seem to be detachable, which is unfortunate but since we’re talking about a drone listed in the consumer section of the company’s lineup, it’s not surprising, really.

In the brief article description on the right hand side page are some more detailed information. We learn that the Mavic 2 transmits 1080p video up to 8 km (almost 5 miles) to the pilot. Furthermore, the drone itself can achieve speeds up to 72Km/h (almost 45 mph). A whooping 31 minutes worth of airtime will be part of the package and because all these figures invite the pilot to fly far and fast, the Mavic 2 drones sport the rumored omnidirectional obstacle sensing. 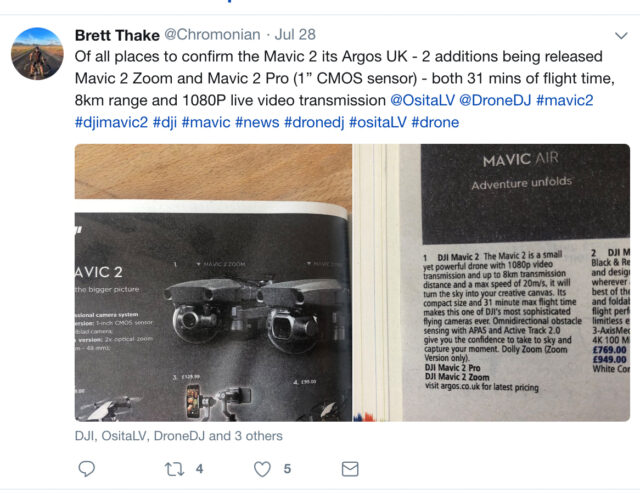 If your weapon of choice is the zoom version, a so-called dolly-zoom can be pulled off with ease. A dolly-zoom is a camera movement in which you zoom while pushing the dolly in the other direction. Push-in while zooming out or vice verca. This effect is pretty complicated to nail when pulling it off by hand but with the Mavic 2 Zoom it shouldn’t be a problem anymore (within its limited zoom range and picture quality, of course).

Pricing? No idea. The price remains nebulous, unfortunately. The predecessor to these new drones, the Mavic Pro Platinum sells for $1,099. So far DJI has managed to aggressively price their lineup of drones, gimbals and accessories so that they may keep the new Mavic 2 drones within this price range.

That’s it for now, keep your eyes peeled. Hopefully these new Mavic models are just ’round the corner.

EDIT: DJI announced an event for August 23rd in New York. We think it’s very likely this is going to be the announcement event because they teased it with a sequence of drone shots on Facebook,

Credit featured image: Brett Thake (Thank you for being responsive an cooperative)!

What do you expect from an updated Mavic drone? Let us know in the comments below!