Today, DJI has announced the Osmo Action – their first acion camera and a direct competitor to the current “King of action cams”, the GoPro HERO7. What are the differences between these two cameras? Which one is better? You will find the answers in our comparison video and the following article. 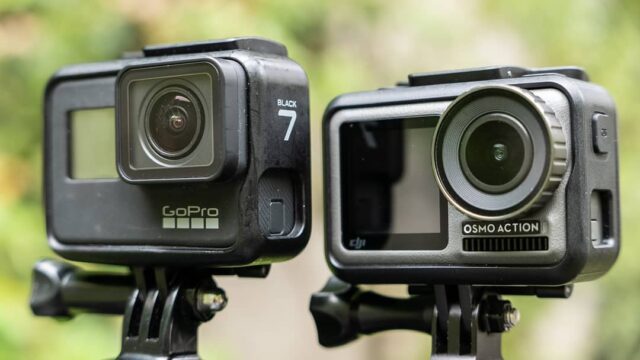 Our action cam specialist Gunther Machu took both the Osmo Action and the GoPro Hero7 for a spin on his mountain bike. He filmed a couple of side-by-side comparison videos as well, when he mounted both cameras on top of each other on his chest mount. You can see these comparison shots in the video above. 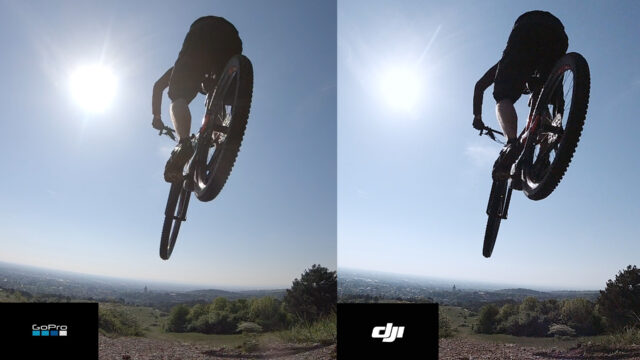 When we compare the stabilization of both cameras, the new Osmo Action’s RockSteady even outperformed the very good HyperSmooth of the Hero7. It is hard to believe, but the Osmo Action really does have better stabilization, which is visible in the side-by-side POV shot from the mountain bike. For this shot, the cameras were both set to manual exposure – GoPro at -0.5 and Osmo Action at -0.7. 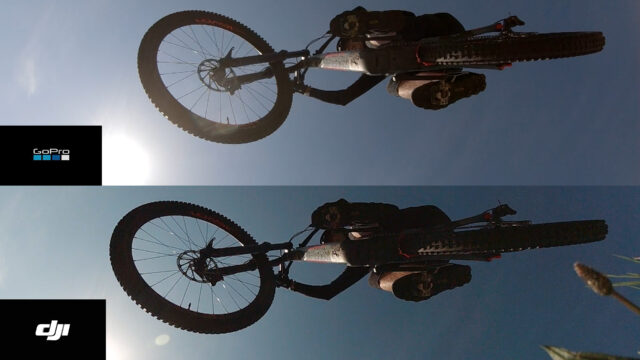 When comparing the slow motion capability, both cams top out at 240fps in 1080p. As you can see from the footage, GoPro produces more pleasing images whereas Osmo Action’s image is over-sharpened with a bit more noise, especially in the shadows. All slow motion shots in Gunther’s test were shot in 240fps on both, the Osmo Action and Hero7. Color was set to D-Cinelike on Osmo and Protune Flat on GoPro.

Generally speaking, the image from GoPro is slightly more pleasing. This is partly thanks to a higher maximum bitrate. GoPro’s Hero7 tops out at 75Mbps in H.265 whereas the Osmo tops out at 100Mbps, but only in H.264. 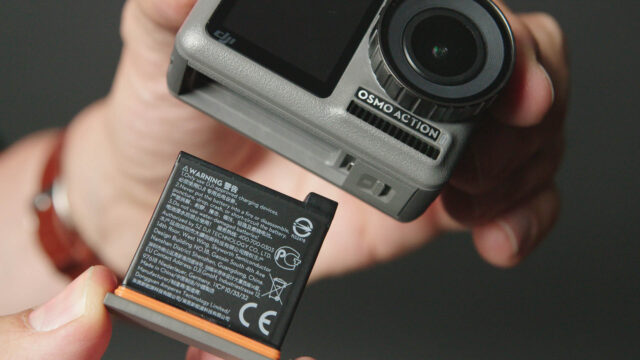 DJI Osmo Action has a slightly larger battery than GoPro.

Very important information and perhaps one of the best advantages that the Osmo Action has over the GoPro Hero7 is battery life. Osmo’s battery is only slightly larger (80mAh more), but the camera does a better job at power management and offers a significantly longer battery life. 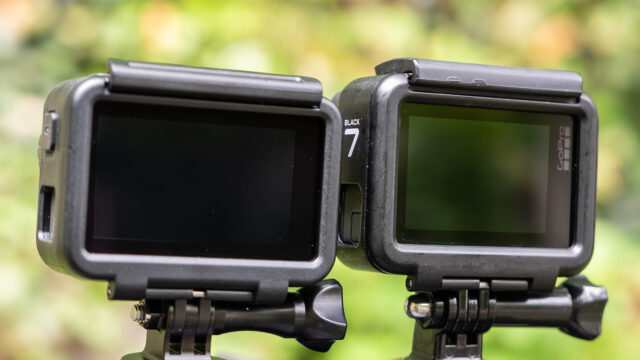 DJI Osmo Action Back Display is significantly larger than GoPro’s.

When comparing the displays of both action cams, the Osmo Action has a larger 16:9 back screen, as opposed to the 4:3 of the GoPro. It also features a full-color front screen, which is great for vlogging or in general, when filming action scenes with a selfie stick, for instance.

Last but not least, it is much easier to change the front glass element with the Osmo Action than it is with the GoPro Hero7. The Osmo features a simple thread to screw the filters on and off whereas GoPro’s system can be very hard to detach or attach, at times.

DJI did a really good job with their first action camera and they even offer it for a lower price than the Hero7. The GoPro HERO7 still remains the king of action cameras when it comes to image quality, but the new Osmo Action introduced very interesting features, including the HDR mode, de-warp feature, and the full-color front display. It even beats the GoPro when it comes to stabilization, which is very impressive. Which camera is better depends on what you are looking for. For image quality, the GoPro is better, for other features I would prefer DJI’s Osmo Action. If DJI polishes the image a bit with a future firmware update, it might actually become the overall winner.

What do you think of our comparison? Which action camera left a better impression? Are you considering switching from GoPro to DJI? Let us know in the comments underneath the article.