The latest GoPro HERO7 update brings 4K slow motion, HyperSmooth and TimeWarp to the Black model. What does it look like and what is the difference between the Silver and the White model?

We caught up with GoPro at Photokina 2018 and went hands-on with the latest Hero7 Black to check out two new features: HyperSmooth and TimeWarp, as well as the difference between the other models in the Hero7 family. The GoPro Hero7 Black certainly packs a punch, promising very smooth 4K 60p footage. GoPro’s have been a staple tiny camera for productions all over the world, so what makes the Hero7 family stand out?

How Smooth Is HyperSmooth?

HyperSmooth is one of the new key features built into the GoPro Hero7 Black. It is 3-axis electronic stabilization that has a 10x crop on the image. GoPro claims it is the equivalent – if not better – than using a handheld gimbal to achieve stable shots. Naturally, we had to check it out on the show floor, and directly compare it to another Hero7 Black with HyperSmooth switched off.

The footage in the video shows that although there is a slight (not significant) crop on the image, the electronic stabilisation functions very well while walking and running. What is interesting: The lack of ‘jello’ similar to the ‘warp stabilizer’ effect on the edges of the video, making the clip more than suitable. This isn’t exactly a full test on a mountain bike or under extreme conditions, so this will be one of the features we will look at extensively in our upcoming review. 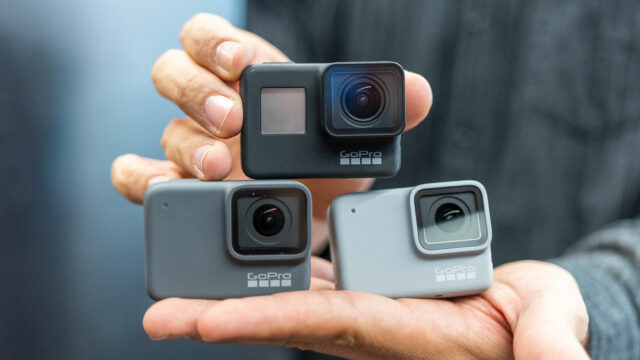 GoPro’s have always been great for capturing time-lapses; they are small, capture a wide field of view and can run for as long as the battery lasts or until the memory runs out. GoPro has extended the time-lapse feature in the Black model by adding TimeWarp, which allows the user to create moving time-lapses, or ‘hyperlapses’, that stitch the images together in-camera. We tested it and this is also very stable, without the usual shakes – something that you have to be very careful to avoid when capturing time-lapses or a hyperlapse.

One of the stand-out features of GoPro cameras has always been achieving slow motion at high resolutions in a tiny body. The Hero7 Black offers 4K resolution at 50/60p, and super slow motion in 1080 HD at 240fps. The Silver and White models miss out on this high frame rate action, with the Silver being capable of recording 4K 25/30p and 1080 HD up to 60fps. The Hero7 White is unable to record 4K, but capable of capturing 1080 HD up to 60fps.

Why the significant difference between the GoPro HERO7 models?

What is apparent with the Hero7 family is that GoPro still wishes to keep user groups segmented. Through research, GoPro has found out that there are set user groups that require or only use specific features; the White model is for users that simply want to take the GoPro out of the box and have it working, without changing many settings. Whereas the Black model is aimed at experienced users that want to push the boundaries on capturing content, whether that is a hyperlapse of a hike, slow motion skiing or filming fast moving vehicles where the Hypersmooth feature is required. These features are exclusive to the GoPro Hero7 Black model, with built-in electronic stabilization available in the Silver and White models (no info on crop or quality of this yet).

Overall, if you’re looking for the next level action camera, there is no other device with features like the GoPro Hero7. It’s unfortunate that so many features were withheld from the Silver and White model, but at its price tag of $399.00, that probably won’t stop users from investing.

We’ll be putting the GoPro Hero7 Black through its paces in the near future, are there any specific features you wish to see demonstrated when we review the camera? Let us know in the comments.