DJI has just announced the Osmo Action, their first action camera and a direct competitor to the GoPro Hero7. It brings some innovative and unique features, like RockSteady stabilization, HDR, De-Warp, and dual full-color screens. Let’s take a close look at the Osmo Action in this hands-on review!

DJI is currently one of the most innovative camera gear companies in the market. They have been dominating the drone market in the last few years and are also very successful with their line of gimbal stabilized cameras, called Osmo. Many filmmakers have been waiting for this and today is the day – DJI announces the Osmo Action – their first action camera and a direct competitor to the current king of action cams, the GoPro Hero7.

If you are interested in a side-by-side comparison to the GoPro Hero7, we are publishing a separate article with a video on this exact topic very soon. In this article, I will focus on all the specs and features of the Osmo Action by itself.

DJI Osmo Action – How Good is it?

First of all, the DJI Osmo Action has dual full-color screens – one large touchscreen at the back and one smaller front screen right next to the lens. This is the first action cam that actually lets you see yourself when you turn the camera around. This is perfect for vloggers or action sports enthusiasts, who point this back at themselves while doing some crazy stunts. The front screen is square and you can select if the image should fill the screen – of course by cutting of the sides – or if it should show a 16:9 version of the video, with black bars on top and at the bottom. 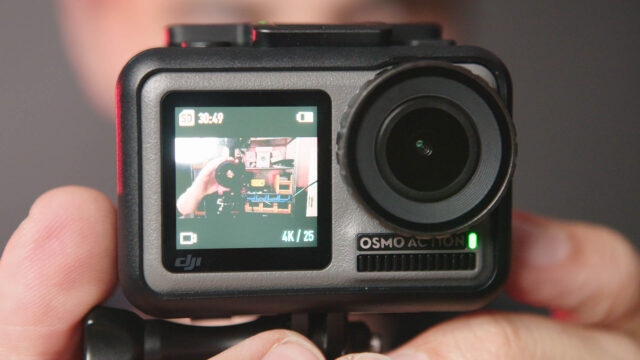 Another innovative feature is the HDR mode. When switching it on, the camera gives you considerably more details in the shadows and especially highlights. This is a great feature to have in an action cam, because very often, you will deal with bright sunlight and harsh shadows within the same shot, or quickly changing circumstances. The colors in HDR mode are nice and vivid, and you can really see a lot of details that are not visible in standard mode, even if you use the “flatter” Cinelike-D mode.

Big downside with HDR mode, however, is that the image stabilization does not work in this mode at all. This makes it less suitable for point-of-view action scenes, as the image will be quite shaky. To make matters worse, the rolling shutter distortion is considerably worse in HDR mode, compared to normal filming mode. 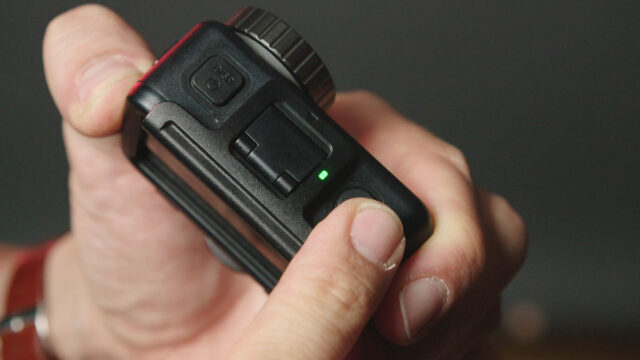 DJI Osmo Action has a small tally light on top.

Talking about image stabilization, that’s the third huge innovation of the Osmo Action. DJI calls its image stabilizer “RockSteady”, and the name really does the technology justice. When you switch RockSteady on, the need for a gimbal literally disappears. It’s clear that DJI is leveraging their experience from drones and gimbals in this technology, and they do it very well.

You can take a look at our side-by-side comparison video of the Osmo Action and the GoPro HERO7 to see how the stabilisation technologies compare. I can already tell you that GoPro’s Hypersmooth is very good, but RockSteady is better. DJI’s stabilization comes at the expense of some wide angle, and you can clearly see the difference in field-of-view once you switch RockSteady on. Having a less wide image has its down- and upsides, but with action cams you usually want a wider image to get close to the action. 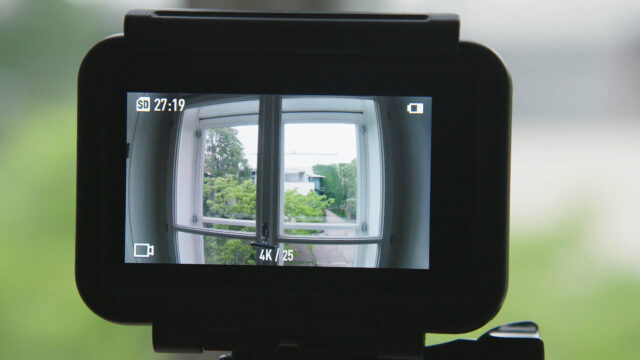 The image distortion can be repaired with the in-camera de-warp function.

Because of the wide-angle lens, action cameras suffer from massive image distortion. It is the typical fish-eye look, which can be corrected in post-production. To tackle the distortion automatically, the DJI Osmo Action has a so-called De-Warp feature built in. That’s very convenient and it saves the time of doing image correction in post-production. The de-warp effect can be combined with the RockSteady stabilizer, which is nice, but it again crops the image slightly.

Image quality in general is very decent and appealing, and the Osmo Action supports a range of resolutions and frame rates. It can shoot at up to 4K 60p, 2.7K resolution for up to 60p, and up to 240 frames per second slow motion in 1080p. However, because the video bitrate never goes higher than 100Mbps in H.264 codec, you can see considerable artifacts – especially in the super slow motion modes. 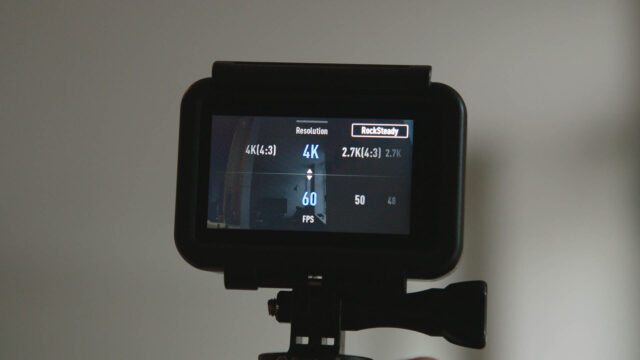 In general, despite the available D-Cinelike mode of the Osmo Action, the image looks a bit over-sharpened in high contrast situations. The over-sharpening also amplifies noise in the shadows, in some situations. Unfortunately, there is currently no way to decrease the sharpening in the Osmo Action. In fact, there are no additional image control features apart from changing from a contrasty, colorful “Standard” to a flatter, less saturated D-Cinelike picture profile. You can, however, change the shutter and ISO and set those manually. 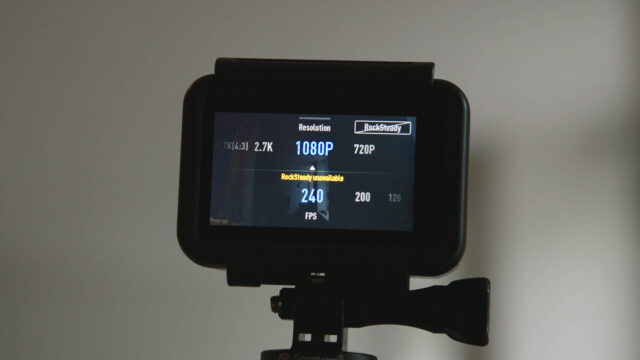 I hope that DJI will give us controls over these settings – like in the Osmo Pocket or their Mavic drones – via a firmware update soon. It’s really needed and I think there is room for optimization with the overall image, especially the sharpness settings.

The Osmo Action can connect to a smartphone via wi-fi. In the DJI Mimo app, which was updated to support the Osmo Action in addition to the Osmo Pocket, you get a nice preview screen of the camera. There are, however, no additional camera settings that you can’t already access via the camera itself – except for a Denoise option. 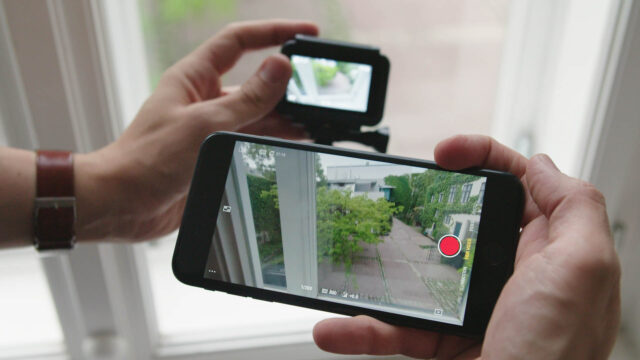 As for the build quality, the DJI Osmo Action lets little to be desired. It has almost the same size as the GoPro, and the design overall is quite similar. It feels very rugged and is shockproof, dustproof and waterproof down to 11 meters depth. What’s also great, is that it shares the same accessory ecosystem with GoPro. So, if you were to upgrade from a GoPro, you are able to use the same mounts. I would have preferred to see a default 1/4″ tripod thread to be freed from custom accessories, though.

The glass element in front of the lens can be unscrewed and replaced with a custom filter of choice. DJI will offer ND filters (ND4, ND8, ND16, and ND32 density) as well as orange seawater and purple freshwater filters to use with the Osmo Action. Unfortunately these filters were not yet available for our review, so we could not test them in the field. 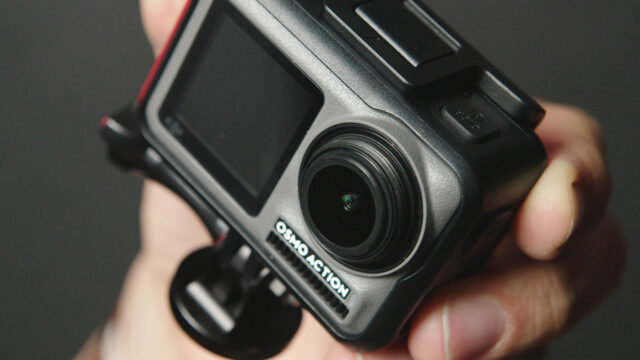 Apart from the square-shaped front color screen, there is also a quite large 2.25″ touchscreen at the back of the camera. It uses the whole width of the body because it’s 16:9 (different from the GoPro screen which is 4:3). The touchscreen interface works quite well, although not every function can be found easily at first try.

Good news is that the Osmo Action uses a custom battery with 1300 mAh, and in our test, the battery lived up to the manufacturer’s claims. We were able to get almost 90 minutes of battery life out of one fully charged battery (when shooting 4K/25p or 30p with RockSteady stabilization enabled). However, if you use higher frame rates in 4K, expect battery life to be reduced.

All in all, DJI truly impressed us with the Osmo Action, which is their first attempt at an action camera – an area where GoPro, despite all its problems in recent years, is still the market leader. For the first time, with the DJI Osmo Action, I have a feeling that GoPro is getting a contender that can truly be problematic for their core business. The Osmo Action is not perfect, and despite the fact that I still prefer the image from a GoPro, there are a series of mighty impressive innovations in the Osmo Action that could convince a lot of existing GoPro users to upgrade to the new DJI camera, rather than another GoPro. If DJI manages to optimize image processing, GoPro will have a very serious contender with the Osmo Action.

As with other DJI products, the Osmo Action is available right now at the moment of its announcement. Links to our partner shops can be found below the article. By buying via our links you support cinema5D in creating reviews like this one. The MSRP for the Osmo Action is US$349 (€379 including VAT in Europe).

If you are considering getting the Osmo Action, you might take a look at DJI’s Trade up program. It can get you a discount on new DJI gear when trading-in your old equipment. You can check more details here.

Last but not least, DJI Care Refresh is now available for Osmo Action. For a certain additional fee it offers comprehensive coverage as well as up to two replacement units within one year. More information about this program can be found here.

Music Courtesy of MusicVine.com Get 25% off your next music license with code C5D25 (valid for one use per customer).

What do you think about DJI Osmo Action. Get it give a fight to GoPro Hero7? Let us know in the comment section below