I recently had a chance to try the Osmo RAW (Zenmuse X5R) at a friend’s wedding. I shot the beginning at 1080p and the ending in UHD, but I shot the whole video in RAW. I used a standard picture setting as they are RAW files anyway, and transcoded into ProRes 4444 to edit. I didn’t change the color in the edit at all, so feel free to download the 4K/UHD file from Vimeo to play with.

Let me get this out of the way: having never used an Osmo before, I screwed up a number of shots right at the beginning without realizing. We couldn’t find the venue, so we just arrived at the same time as the bride, which meant I just had to grab the Osmo and go for it. I must have been in some kind of auto-exposure mode, and I couldn’t recognize how crappy these adjustments looked on the iPhone screen until I reviewed the footage after the first bit of shooting. So please excuse these terribly stuttery shots that occurred as a result of automatic shutter speed adjustments.

This leads us to the first problem with the Osmo: it really needs an ND because shooting high shutter speeds means that movements look jumpy – you should adhere to the 180 degree shutter rule whenever possible when filming, no matter the camera, and you can only achieve this by taking light away from your sensor with filters, particularly in bright daylight. 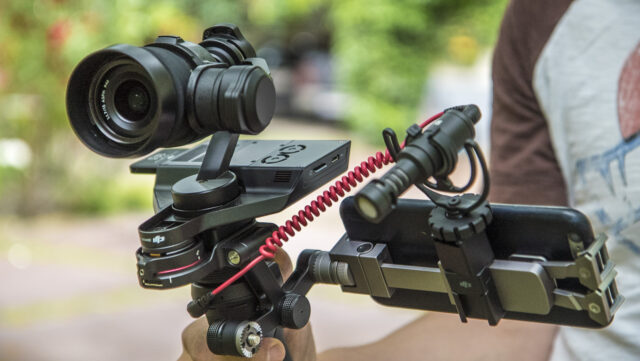 But let me really start by saying what an amazing device the DJI Osmo is in general. It’s a lot of smart technology in a very small package that feels very well thought out. It has a great feel, with all its buttons just in the right place, and the DJI Go app to control the Osmo from your phone is absolutely mind-blowing.

The Osmo doesn’t have a built-in preview screen. You connect your phone to a hotspot that the Osmo generates, and start the app. Tap on “camera” and you should immediately see the preview image. Surprisingly, the lag is so short that it’s barely noticeable, despite the Wifi connection.

The interface controls of the DJI Go app are extremely comprehensive, although some things are not in the logical place. I found the autofocus quite poor and unfortunately it can’t seem to track the objects you tap on on the screen – it just focuses once but does not keep them in focus. Switch to manual focus and you get a virtual focus wheel on screen, which surprisingly works pretty well. Long focus ramps should be avoided though, because going from macro to infinity doesn’t work in one go. Further camera settings are buried in the menu but in general the entire app is way more intuitive than your average camera menu from any Japanese manufacturer. 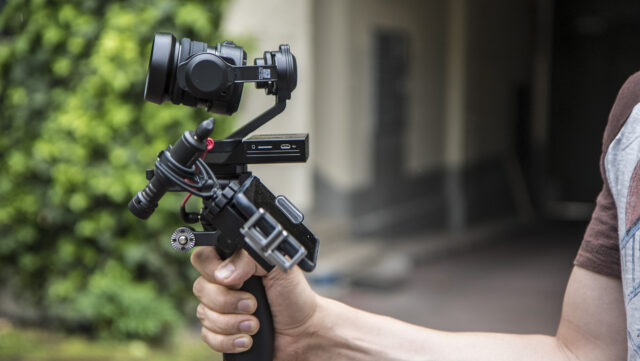 The new RAW version of the Osmo differs from the former X5 version by its raw recorder – a fan-cooled unit that records onto custom DJI SSDs that come at a steep price ($1800 for 512 GB). The quality of the raw footage is exceptional, and you can record half an hour of 4K or UHD footage onto a 512 GB card, or 4 hours of HD. I recorded the first part of my review in HD because I didn’t know how long the ceremony was going to last – I later changed to UHD recording.

There is one huge issue with the raw recorder: it’s extremely noisy. So much so, that it is impossible to record any usable sound with the device, and noisy enough to annoy the people you are filming. During the ceremony, I shot a few shots walking past the audience, adjusting the angle of the Osmo camera through the brilliant joystick so that it pointed sideways. I was about 2 meters away from the guests, and many heads turned because of the noise the device was producing. This can be a real deal-breaker for many shooters out there. 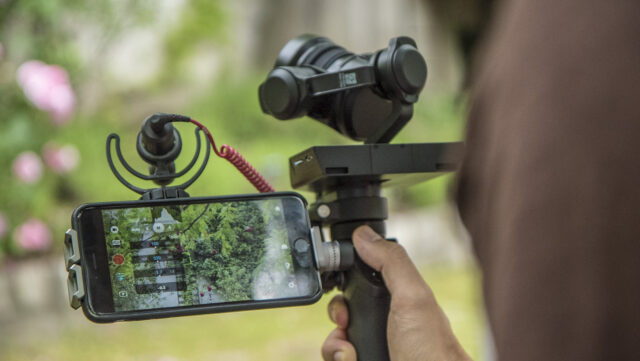 Smartphone interface & preview – smart or not?

In theory, the idea of using your high-resolution smartphone as a preview touch screen for the Osmo is quite smart, but there are a bunch of problems:

UPDATE: I was wrong here – it is possible to enable the Airplane mode and then re-enable Wifi only. I was not aware that that is possible. This is also possible on Android, similarly. Very neat!

Secondly – and this might be an even bigger problem – is that of course your smartphone battery is drained quickly when using it as a preview and interface monitor. There is space to attach a charging cable, but you will have to connect it to an external battery pack, which you would have to somehow attach to Osmo in order to not be in the way.

Despite this, I didn’t even run into this problem when reviewing the Osmo, simply because I was only supplied with one battery for the device. This meant that when it drained after 20-30 minutes of continuous use, I had to recharge it for 1-1.5 hours before I could use it again. DJI provided us with a larger Inspire battery which was supposed to last longer, as it can be connected running a cable from the battery in my pocket to the Osmo. This proved to be impractical as I also had to switch cameras because I was filming the wedding with a Sony a7S as well, so I decided no to go for the external battery most of the time.

The stabilisation of the Osmo is quite good, and unlike with other gimbals which use third-party cameras, balancing is of course a non-issue for the Osmo. The joystick button control makes it a breeze to adjust the angle to your liking. Holding down the pistol trigger button below the grip, the direction of the camera temporarily stays put, and doesn’t follow your movements like normally.

I used the Osmo with the supplied standard lens, the 1.7/15, which provided great shallow depth of field due to its wide aperture. Focusing with the virtual wheel isn’t easy though, and the autofocus isn’t great (and not continuous). I found this lens to be a good compromise between wide angle shots while not distorting too much, although in tighter spaces I often found it could have been wider. It’s the same old problem with the Micro Four Thirds sensor: it’s hard to find wide lenses because of the 2x crop sensor .

The X5R still holds a micro SD card slot in addition to the RAW recorder, which means you have easily playable proxies recorded simultanously. Even the DJI Go app records a preview image, which makes it even easier. Reviewing RAW footage has never been easier with any other camera I know.

Ingesting the DNG RAW sequences into your Mac works by using the included CineLight app, which also offers options to export those sequences. I then converted them into ProRes 4444 using Blackmagic DaVinci Resolve 12.5 to make them more edit-friendly.

The look of the 4K RAW footage is nothing short of spectacular. As expected, the highlight retention is exceptional, as are the details in the shadows. A formal lab test and some aerial footage will follow in a separate post by Sebastian, and be warned that the aerials looks absolutely mind-blowing. DJI has managed to release a product whose image quality can compete with the highest-end multicopter setups with much heavier and expensive cameras, and you probably wouldn’t see the difference.

Post production of RAW footage is obviously time and storage consuming, so I wouldn’t use the Osmo RAW on every production. However, when high quality is needed and you have the time for post production, then it can really shine. It would have been nice to find a compromise between the lossless RAW footage and the heavily compressed footage that ends up on the micro SD card. Hopefully DJI can license ProRes in the future and add this kind of recording to the X5R in order to accommodate for more everyday productions. 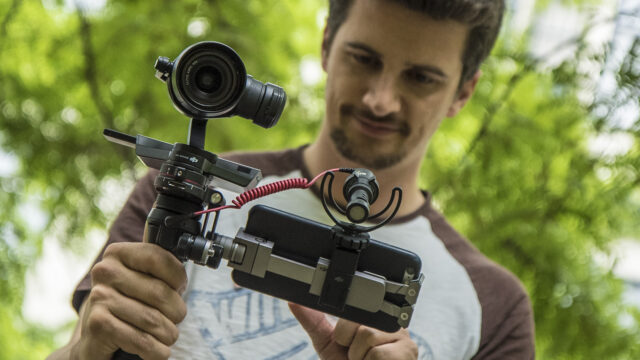 Using the Osmo RAW with the Zenmuse X5R makes you feel like you are using a gadget from the future. DJI seem to be far ahead of much of their competition in terms of interface and hardware. There are definitely interesting times ahead, and more and more established companies should brace themselves for DJI to disrupt their market.

This time, I see the market mostly in the multicopter / drone areas, considering the RAW quality of the X5R footage. I don’t see this disruption threatening other one-handed-gimbals or even their own original Osmo too much, simply because the noise of the unit will make it unusable for many practical applications which require original sound. For example, I don’t see a way of actually doing a walk-and-talk with the Osmo RAW due to its noise level.

Also, the amount of battery drain is troubling. About 20 minutes when shooting 4K or UHD RAW, maybe 30 or 35 when shooting 1080p. You will literally need 10-15 batteries to get through a day’s worth of shooting.

Despite its shortcomings, the DJI Osmo RAW X5R is a sign of what’s yet to come in the gimbal and stabilizer market. It will find its audience, and certainly also on higher-end productions because of its sheer RAW power and ease of use.