This is a guest review by drone expert and cinema5D reader Chris Boyes from 5kdigitalfilm, who had a chance to work with DJI’s new high-end camera on a job. He created some beautiful imagery and made this DJI Zenmuse X7 review for you. Enjoy! (Intro by Sebastian Wöber)

We have been using the DJI Inspire 2 and Zenmuse X5s professionally for the last nine months and regardless of much that I have read in the forums, ours has proved very reliable. Yes, the props are a bit loose and it’s irritating having to drive to get a connection to log in sometimes, but let’s not forget it’s a highly complicated and technologically advanced bit of kit that, for us, always delivered when it mattered.

I think many of us were excited after the press release revealed the specs for the Zenmuse X7. A few weeks after we had an offer for an ad job filming Tirol’s beautiful landscapes for the Cine Tirol Film Commission. For this project, DJI provided a sample of the DJI Zenmuse X7 along with a complete set of lenses, which led to this Zenmuse X7 review. 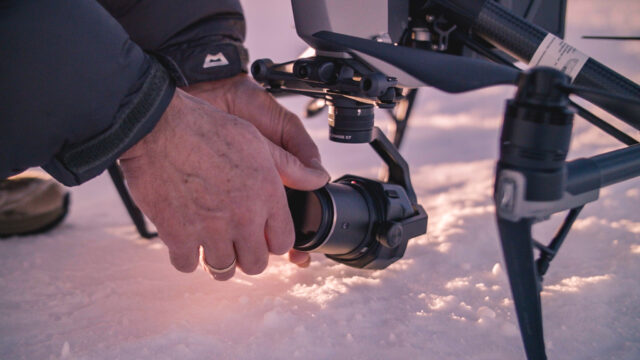 We were running a Beta software from DJI on the Inspire 2, with 2 CrystalSky monitors and the latest firmware on everything else.

The test flight went well with everything more or less working as it should, we filmed a few minutes in a few different formats just to check we were up and running. We decided that 4K ProRes 4444XQ was the best option for the project.

Winter had arrived a month early making our story board obsolete and planning extremely difficult as our primary brief was to capture the Autumn/Winter transition in the mountains. 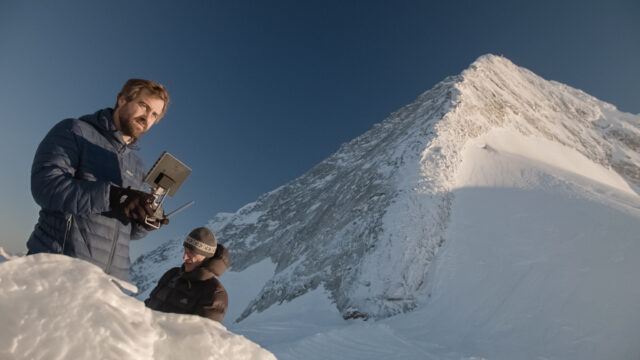 From the next morning on, we went out daily, battling the cold wind and snow waiting for a moment where the clouds parted to try and catch some colour before the landscape turned monochrome.

We worked in very difficult conditions with extreme temperatures of sometimes down to -15°C, high altitudes of up to 3300m as well as strong winds. We had to keep batteries in our pockets and even hover 1m over ground to heat them up quick enough as to not miss a shot. The DJI Inspire 2 was so solid, I thought more than once that it would never come home. But it did. Again, and again. 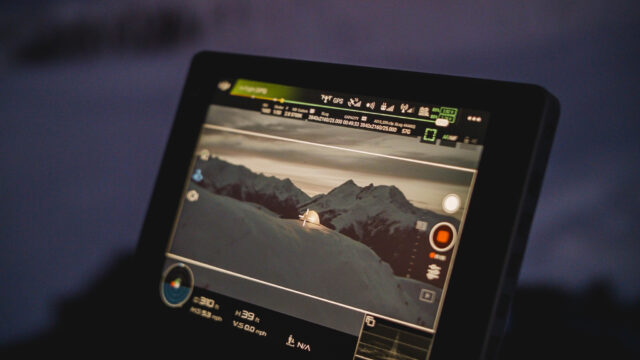 The DJI Zenmuse X7 felt great in the air, the gimbal was smooth, and operation over CrystalSky reactive. Lens changes were a breeze and restart occurred immediately, which in these harsh conditions was a godsend.

We filmed mostly landscapes in early morning or late evening, I found my 1.2 & 1.5 ND filters that I used on the x5s had a tendency to be a bit much. ND 8 seemed to keep me where I wanted to be aperture wise.

Filming mainly big panoramas the camera performed well at its native ISO 400 and open to about f5,6-f8. On this project, apart from a few shots closer to the ground, we didn’t really benefit from the shallow depth of field obtainable from the larger sensor.

Images From the Zenmuse X7

I noticed that monitoring exposure of areas with brightly lit snow was causing me some headaches, as my CrystalSky was often blown out even though my histogram told me I was safe. Later, the results seemed to be somewhere in the middle. Some of the snow in the bright sunshine was blown out, which seemed to be some kind of firmware issue that I soon had to get used to.

The images are not over sharpened off the sensor and for some uses they may be a bit soft. Some may worry that the lenses do not perform well, but if you look at the image in a proper post environment you can see that processing off the sensor seems to be the reason, as it is uniform across all material. 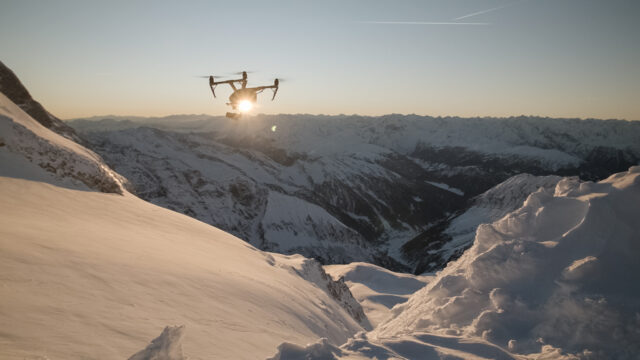 We shot two sequences at dusk: it was very dark and I found myself quickly pushing the ISO to 1600 which is the max in EI mode. The low-light performance is inhibited by the slow lenses and might in comparisons or charts not be outstanding. However, in the grade and handled professionally, the images came up great and looked organic and natural.

The DJI Zenmuse X7 does have much better highlight roll-off than the DJI Zenmuse X5S. This was evident when shooting against the sun. An improved dynamic range was also noticeable in the material, but in order to get the best out of both of these, correct exposure was critical and, in my opinion, could only be achieved after more experience with the camera. 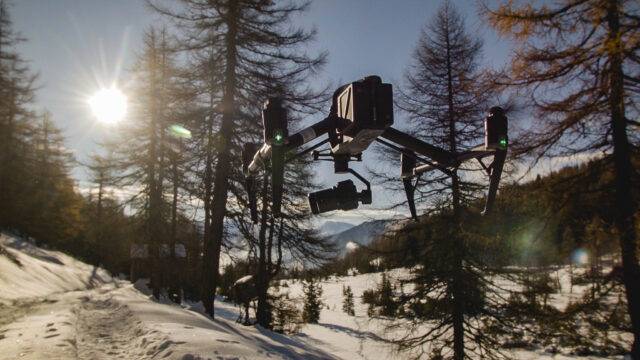 We have used the X5s and inspire 2 on quite a few high-end jobs, and the amount of Raw we have actually shot is percentage wise quite low.

Is this likely to change with the X7? I don’t think so.

At the end of the day running out of media is just another reason to have to come down and land.

ProRes 4444XQ is good enough for most situations unless you have extreme lighting/contrast problems or your shot will have heavy VFX or will be used for background replacement.

With one 480GB SSD we had over 30 mins of 4444 XQ footage which was more than enough for one location, meaning we rarely had to change SSD´s in the field.

We edited the ProRes files natively on a windows based high end machine running the latest Adobe software. We use a powerful  i7-6900 with 64GB Ram and multiple m.2 SSD drives along with two fast 4TB spinners in a Raid 0 for footage playback.

We can edit and playback the ProRes 4444 D-log footage in full res with effects and a basic grade without issues, which results in a very pleasing straight forward editing experience. When locked we play out a XML/EDL and the footage was send for grading in Resolve.

The 6K RAW DNG feature with the X7 is a nice and useful addition, but if you are not being rung up regularly by Hollywood or BMW then the chances of you really needing it are small.

My personal conclusion to this Zenmuse X7 review is this: the DJI Zenmuse X7 is a great camera that produces great images in the right hands. It’s not as plug-and-play as the X5s, and you have to get to know it and get a feeling for its strengths.

I have always been someone who prefers to look subjectively at the picture over graphs and figures. And to me, the X7 has a very cinematic image that we have never seen from a drone camera before. It is obviously designed to fit into a high-end production environment and deserves proper handling in post. Exposure is more critical especially in bright scenes like sunlit snow, and it seems that the Log footage from the X7 likes to be exposed a tick under what I am used too from shooting different logs.

There will always be those moments where you just don’t have much light – for these moments I would like to see at least a couple of faster lenses become available in the future.

If you shoot aerials professionally and already own the DJI Inspire 2, then it makes sense to invest in this small but powerful bit of technology.

We hope you enjoyed this DJI Zenmuse X7 review. Have you worked with DJI’s new high-end camera yourself? Share your experience in the comments. 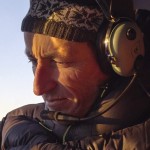 Chris Boyes is the Aerial DOP for 5kdigitalfilm. Chris started as an assistant with the BBC and went on to film wildlife productions for the BBC's "Wildlife on One", before broadening to cover all modern digital production techniques working on documentary's, commercials and short films.