This is a guest review by director of photography and cinema5D reader Scott Leslie who reviewed the DoP SnapBag LED Softbox with his Lupo lights. DoP Choice is a German company that specializes in softbox solutions for LED fixtures. Enjoy this review. (Intro by Sebastian Wöber)

I wanted to take a look at a new approach to the softbox: The DoP Choice SnapBag, an LED Softbox. They’re versatile, easy to setup and affordable softboxes for both LED panels and LED fresnel lights. The reason they’re called SnapBags is that you simply “snap” them open and they’re ready to be mounted onto your lamp.

I got them for my Lupo SuperPanel and the Lupo Fresnel lights, the DayLED 2000 and DayLED 1000. 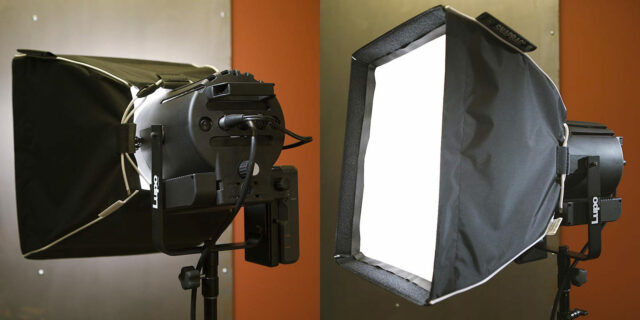 The SnapBag Flex is a really unique solution. It’s the first self-tightening LED softbox. Instead of mounting the softbox on a typical speed ring (which can be a pain), the SnapBag flex attaches directly to your lamp. You simply put the softbox over the face of the lamp, pull the bungee tight and secure it with the built in cinch clamp. Really simple, really fast and it eliminates the need for an expensive speedring.

Before I found this solution I was actually looking to buy a speedring for my Lupo DayLED 2000 to use with an existing softbox that I own, but the speedring alone was going to cost just under $400. The full SnapBag Flex softbox is only $300!

What’s also cool about the SnapBag Flex is that it fits both my Lupo DayLED 1000 and DayLED 2000. One softbox can fit many different lamp diameters. So you can swap the softbox between different LED Fresnel lights. Really versatile! 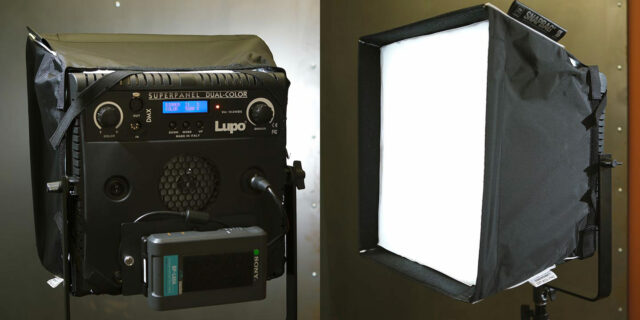 The DoP Choice SnapBag LED Panel 1×1 attaches to the fixture through heavy-duty Velcro straps and can snug up to the corners through separate Velcro straps. This makes for a solid mount that won’t fall off when mounted in a grid or outside in the wind.

The front of both the SnapBag Flex and SnapBag LED Panel 1×1 are exactly the same. They have a removable diffusion cloth that can come in a quarter, half, full and “Magic Cloth”. It ships with half diffusion and you can buy the other densities separately. If you haven’t heard of Magic Cloth, it’s a highly reflective material that magnifies and evenly spreads the light across its face, eliminating the center hotspot! This is really nice because there’s no need for an internal baffling. 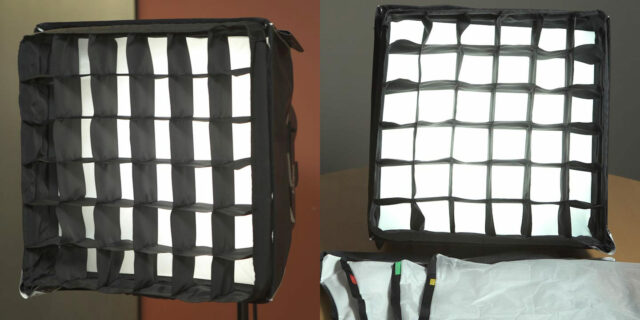 The SnapGrid is made out of stainless steel covered by a heavy-duty fabric. It you’re familiar with the old snap bracelets – it is asically the same technology – now adapted to grip gear. So it simply snaps open and it’s rigid and ready to mount. This really makes for a hassle free setup. But more than that, it eliminates the sagging you get from standard grids. For example you can hang your light pointing straight down and you won’t get the sag, the tummy, you get from standard grids.

The SnapBags and SnapGrids are kind of the evolution of the softbox with their innovative pop-up design. So if you’re looking for a quicker to setup, lighter weight and more affordable softbox and grid, check them out!

You can get some versions of them in the US at B&H and in Europe at CVP. The full catalogue for different LED lights is available at dopchoice.com

This article first appeared on esproductions.tv