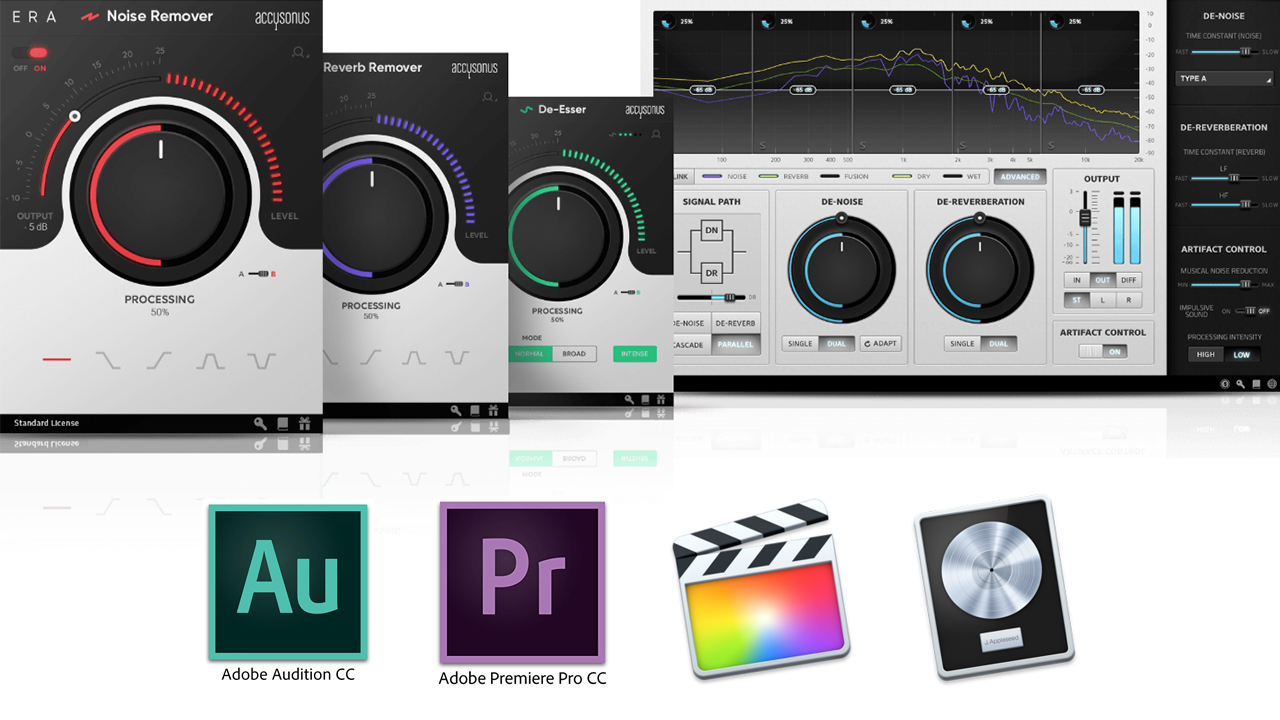 Accusonus, a company specialized in audio software, has recently launched a new series of exciting one knob plugins called ERA. These plugins are compatible with Adobe Premiere Pro, Adobe Audition, Final Cut Pro X and nearly every DAW available. Designed with filmmakers in mind, let’s take a look at how quickly they can improve your next production.

The first plugin and one of the most impressive ones to me is the noise remover. If you are shooting many interviews – inside or outside, in uncontrolled environments – it can be a lifesaver. Nearly every filmmaker has faced a fan or an air conditioner that was impossible to shut off. With a single knob, that’s a thing of the past. The internal processing seems quite complicated, but the result is impressive.

Filmmakers that shoot interviews/documentaries/short films in large rooms with lousy acoustics are familiar with echo and reverb. The ERA Reverb Remover improves your audio massively, while trying to stay as natural sounding as possible. Of course, the better the original sound is, the better the results are, but it can help a lot in tricky situations.

When you record someone speaking, their voice intensity can vary a lot. Of course, you can adjust the volume input directly on set, but as a one-man-crew, it’s impossible to do.

If you need the voice of the person speaking to be “constant” – not low at certain moments and higher at other – voice leveling the dialogue by hand is a time-consuming task. The ERA voice leveler plugin helps you smooth out your voice track without adding background noise when the person is not talking.

Plosives – usually loud and “aggressive” P sounds at the beginning of a sentence – are hard to remove by hand because they are very inconsistent. The ERA plosive remover takes care of that with a single turn of a knob.

Oftentimes, “s/z/ch/sh” sounds are harsh to the ear. To fight these, you usually use what’s called a de-esser. A lot of de-esser plugins are available on the market, but the ERA de-esser is probably the most simple one to use to remove “s” sounds: one turn of a knob, and they’re gone.

There are two kinds of the ERA series of plugins available: the ERA bundle standard, which includes everything listed above and the ERA bundle pro that adds another plugin called ERA-D.

ERA-D is a more advanced and sophisticated de-noise and de-reverberation plugin. With more fine-tuning adjustments available, you can control what you’re doing, more precisely.

Until January 1st, there is a special end of the year sale :

If you are hesitant, you can download a free 14-days trial. All of the ERA plugins are available now on the Accusonus website.

Do you use 3rd party audio repair plugins in Adobe Premiere or Final Cut Pro X? What are your thoughts on the ERA series of plugins? Let us know in the comment section!