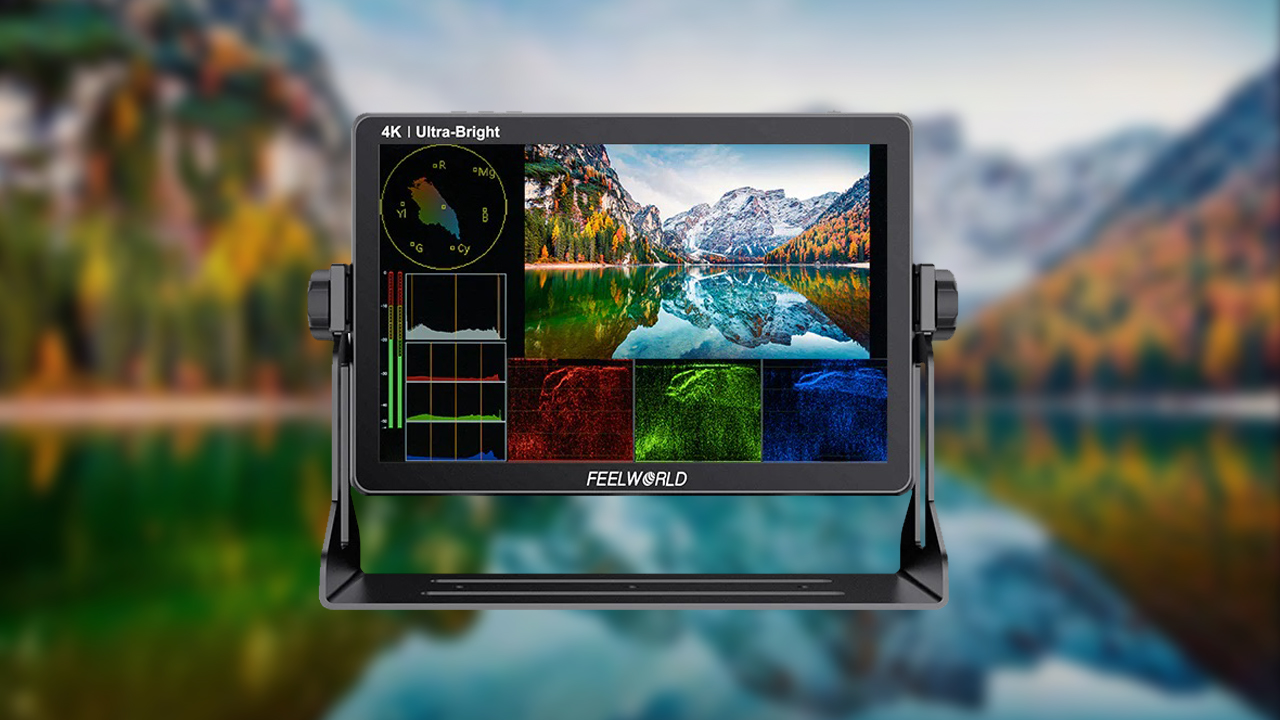 FEELWORLD has recently released a new 10.1” director monitor, the LUT11S. It offers a large 1920×1200 screen with a maximum brightness of 2000 nits, HDMI and 3G-SDI connections, support for up to 50 custom LUTs, and a Sony NP-F battery plate at the back to host and power a wireless video transmitter.

At the beginning of the year, FEELWORLD launched the LUT5, a 5-inch on-camera monitor with a maximum brightness of 3000 nits! Now, the company is back with the LUT11S, which is not as bright, but provides directors and focus pullers with a much larger viewing area to monitor their image.

The overall design looks similar to that of the existing LUT7S PRO on-camera model, which I keep in my kit as a backup monitor, just with a few minor improvements. So, let’s take a closer look at what the new FEELWORLD LUT11S is all about.

The new FEELWORLD LUT11S features a 10.1” touchscreen IPS display with a resolution of 1920×1200, a viewing angle of 170°, and a contrast ratio of 800:1. Its maximum brightness of 2000 nits easily makes it a daylight-viewable monitor. Personally, I never experienced any issues shooting outdoors with the LUT7S PRO. Moreover, the monitor has a built-in light sensor to automatically adjust the brightness of the screen, depending on the light conditions of the environment.

Being an “S” model, the LUT11S features both HDMI and 3G-SDI connectors at the bottom. The monitor has two HDMI inputs and a single HDMI output, all of which support signals up to DCI 4K60p. It is also equipped with single 3G-SDI input and output ports that support 60p signals at up to DCI 2K and 1080p resolutions, respectively. The manufacturer doesn’t mention HDMI/SDI signal cross-conversion on their website, so I guess the LUT11S, just like the LUT7S PRO, lacks this useful feature.

The LUT11S comes with all of the most common focus, framing, and exposure tools that one would need to properly monitor the image on set. These include: waveform, vectorscope, histogram, audio meters, peaking, zebra, anamorphic de-squeeze, and more. Also, the LUT11S introduces a redesigned menu layout that finally replaces the old-fashioned user interface.

According to FEELWORLD, the monitor supports the Rec.709, DCI P3, and BT.2020 color spaces and comes equipped with many built-in Log to Rec.709 LUTs. These are compatible with some of the most popular camera models and gamma curves. Nonetheless, users can also load their own LUTs into the unit via the SD card slot. Up to 50 custom .cube files can be stored, and the chosen look can also be applied to the 3G-SDI loop out.

The screen measures 242x156x23mm in size and only weighs 810g, meaning it should be quite portable when moving between different locations. However, I’m afraid its lightness is due to a poor plastic construction, which is one of my major concerns when working with the LUT7S PRO.

Still, it’s worth noting that the LUT11S is not designed to be an on-camera monitor, so most users can probably live with its build quality. Instead, the monitor comes with an included desk stand, while it can also be mounted to C-stands or other hardware, using the bottom and left/right side 1/4”-20 threaded holes.

The unit can be powered via a dual Sony NP-F style battery plate at the back. Batteries can be hot-swapped during operation and the company claims that a single 6600mAh battery can keep the monitor running for about two hours. Furthermore, there’s an adjustable NP-F plate on the back that can be used to conveniently install and power a wireless video transmitter.

The LUT11S can also draw juice via its DC IN 12V input, while powering cameras or other accessories, using the DC OUT 8V auxiliary port. Finally, the monitor has 3 assignable buttons as well as a selection dial at the top, a 3.5mm headphone jack at the bottom, and a 3-color LED tally light at the back, which can be controlled via the DB-9 port.

The official retail price of the new FEELWORLD LUT11S is $349.99, as stated on the manufacturer’s website. However, the monitor is also currently listed on B&H for $299.99.

What’s your experience with FEELWORLD monitors? What do you think of the new FEELWORLD LUT11S? Let us know your thoughts in the comment section below!