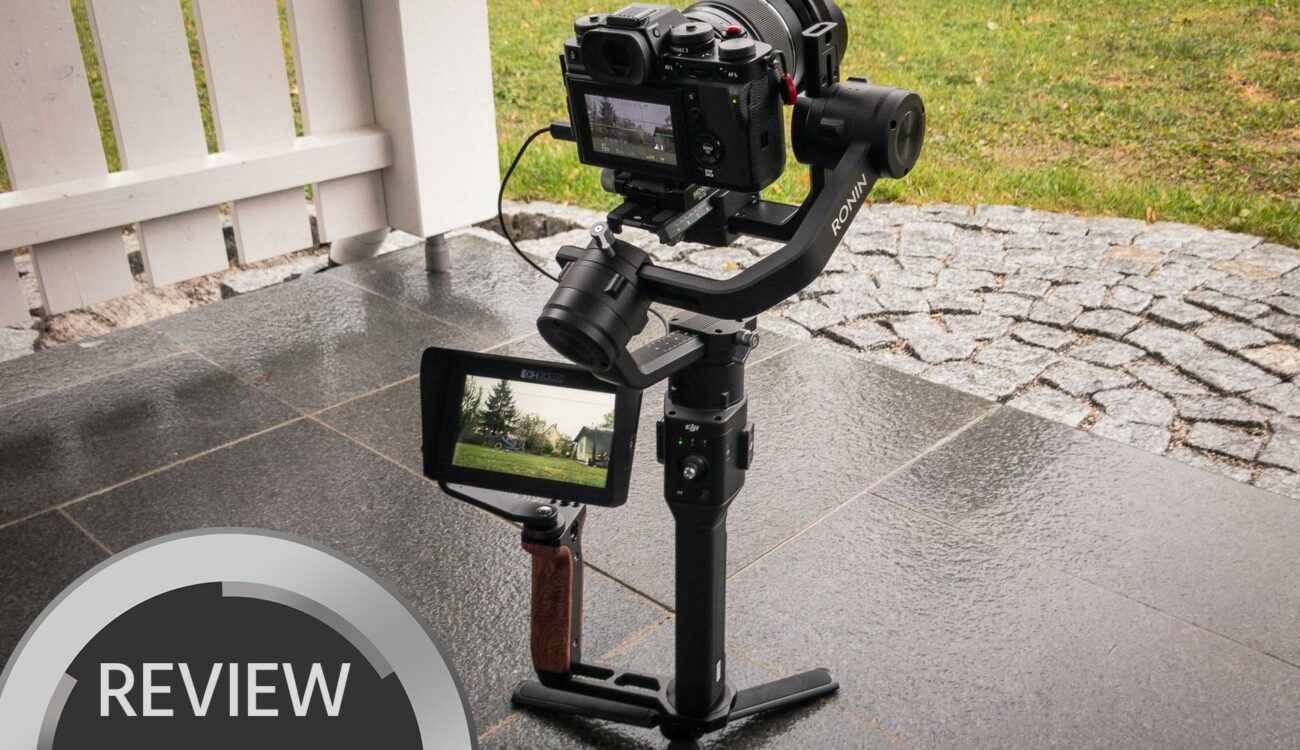 In this guest review, Vienna-based filmmaker Florian Gintenreiter takes a close look at this combination: the FUJIFILM X-T3 on a DJI Ronin-S. Intrigued? Read on for his hands-on impressions. 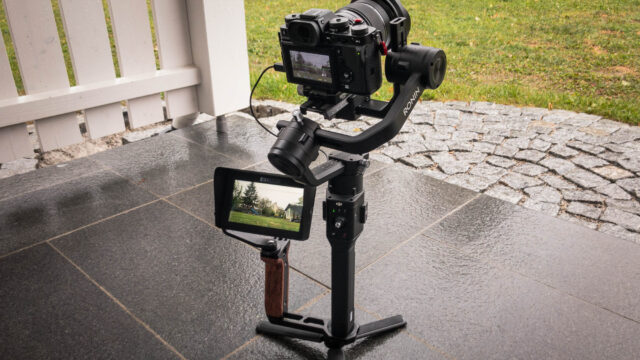 My preordered DJI Ronin-S came in late July and I only had my Fujifilm X-T2 to put on the gimbal and play a bit, but the XT-2’s weak internal codec (8-Bit 4:2:2 @ 100MBit/s) was prohibitive for professional work, so I waited for my ordered Blackmagic Pocket Cinema Camera 4K to arrive but it hasn’t been delivered to this date (yes I know I am not alone waiting for it!).

Then — much to my surprise — FUJIFILM’s awesome X-T3 camera came out, which sports an internal codec that’s vastly superior to the X-T2, great focus-tracking and got a sleuth of other video-related improvements. I decided to upgrade from my trusty X-T2 and ordered FUJIFILM’s new flagship camera. Check out Johnnie’s hands-on review and footage from the X-T3 here in case you missed it. 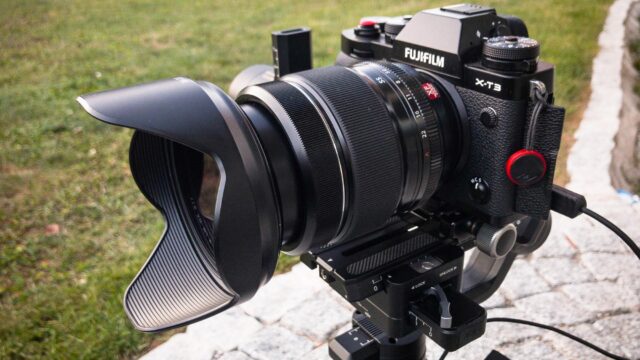 Apart from our own review, the internet is full with reviews and tests of X-T3’s video and stills capabilities, so in this article I chose to focus on its usability on the DJI Ronin-S gimbal (which was also reviewed on cinema5D in an extensive hands-on and tutorial review here already).

As soon as the X-T3 arrived I slapped it onto the DJI Ronin-S and started experimenting. The camera together with the FUJIFILM XF 16-55 f2.8 zoom lens was quickly balanced and handled easily by the gimbal’s strong motors. That’s the setup I took out on a first commercial job.

The FUJIFILM X-T3’s vastly improved autofocus-system with enhanced face and eye detection, made it fairly easy to use on the gimbal. Of course the focus slipped here and there, but overall autofocus helped a great deal.

I personally don’t like to use vari-NDs because they’re basically polarising filters that can make skin look waxen, the sky unevenly exposed and introduce other strange artifacts. Instead, I used a set of Gobe 77mm screw-on ND filters consisting of ND2, ND4 and ND8 on the FUJIFILM XF 16-55 f2.8 lens. They’re great because filters can be combined, and in addition, the lens sun hood can still be used and the lens-cap can be put on top of the filter. This filter set up helped me to keep the shutter speed at around 1/50 and get a decent low working f-stop. 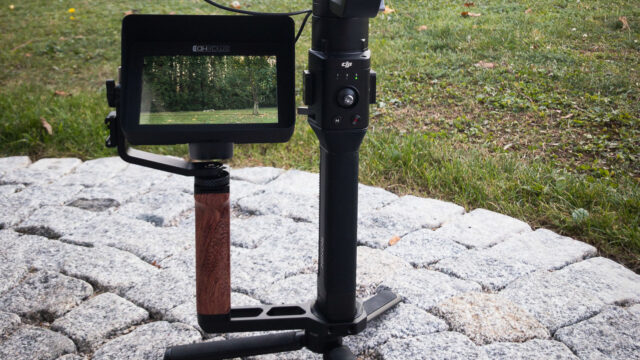 A monitor is needed

The DJI Ronin-S lacks mounting points, so I cobbled something together with rig-parts I had lying around to mount my Atomos Shogun Inferno to the Ronin. Then, I installed the F-Log to Rec.709 LUT which is provided by FUJIFILM on their website onto the Shogun. That made it possible to more precisely expose F-Log, while monitoring the image with correct colors and contrast.

I took this setup out on the second commercial job and it worked even better, although the Shogun’s additional weight made the rig hard to operate for a longer duration.

EDIT: Atomos just responded to my support ticket in a most helpful way and are working with me to narrow down the problem. Everything points to the fact that despite me using HDMI 2.0 cables they might be too slow or poorly shielded to handle the 10Bit data stream from the FUJIFILM X-T3.

I will keep you posted on any progress.

As the Shogun is also a recorder I tried to record the XT-3’s 4:2:2 10Bit HDMI output to the device for even higher quality files than its internal 10Bit 4:2:0 recording, but I ran into some problems there.

The Shogun kept dropping frames. I tested two different HDMI cables and ruled out the SSD I recorded to as culprits. The recordings were missing frames every couple of seconds. Fortunately I recorded everything to the XT-3’s internal cards and those recordings were fine!

Through cinema5D I made FUJIFILM aware of the issue and they promised to look into it.  Also, I have informed Atomos about the problem and they have asked for details to be able to work on the problem, which I have provided. Let’s see if and when this gets fixed. It’s also possible that my XT-3 has some sort of hardware problem on the HDMI-out as I have not found anyone with a similar problem on the web. (Or maybe no one is recording externally)….

As a side note, the XT-3 formats its cards with the FAT16 file system so file size is limited to 4GB, which is about 1:22 minutes at 4K 25p 400MBit/s. For longer recordings it will split the clip into 4GB chunks that need to be stitched together in post. That’s a nuisance, but it’s frame-accurate.

Because of the dropped frames, recording from the XT-3 externally is not an option for me at the moment, so I decided to stick with recording internally for the time being. The footage out-of-camera is very solid and the quality difference to Atomos recorded ProRes422HQ is negligible for my purposes. I would’t be confident doing green screen work though. 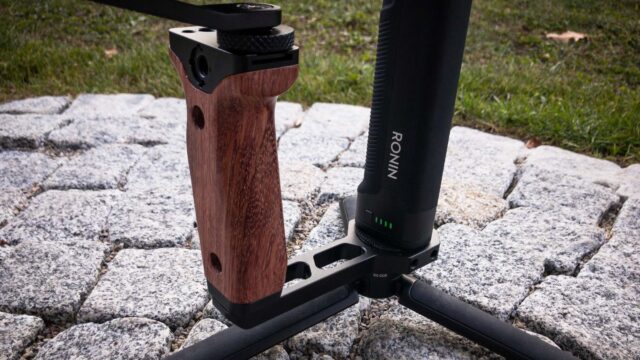 As with the X-T3, a lot has been published about the Ronin-S gimbal itself, so I won’t go into any details here. (See Nino’s full Ronin-S review and tutorial here). In a nutshell, it is an awesome piece of equipment, which plays well with the FUJIFILM X-T3 even though it is currently not yet supported to be controlled by the gimbal.

When it comes to Pimping the Ronin-S, Chinese accessories company SmallRig has designed a side-handle for the Ronin that made my makeshift Shogun contraption obsolete and the Ronin much more comfortable to operate. On top of the grip is a cold-shoe and a few 1/4 and 3/8 inch mounting points for adding accessories.

Because of the Shogun’s weight and problems to record the XT-3’s output I got the small, lightweight SmallHD Focus monitor and attached it to the handgrip’s cold-shoe mounting point.

The SmallHD Focus — with its ability to put a LUT on the image, numerous image analysis tools like false colour, peaking, waveform, its quick touch-interface and its low weight — is the perfect monitor for being used on the Ronin. I just had to mount it upside-down, so its own bracket would be clear of the Ronin’s handle.

I hope that FUJIFILM will consider changing the X-T3 internal recording files system to FAT32. This will allow for clips to be larger than 4GB, which will make the X-T3 an even more useful camera in general.

I will also be looking into the possibility of powering the camera from the gimbal — it should be possible because the Ronin has power-taps built-in.

I hope that DJI will add support for the X-T3 for at least start/stop control and one-shot AF. I don’t know if that’s possible but maybe they could even add support for the manual-focus-wheel like it has for the Panasonic GH5. There is already a thread in DJIs forums about that. I made sure to second the request for a FUJIFILM support there and if you’re interested in the combo, maybe you will too.

DJI has announced a few accessories for the Ronin-S that have the potential to make the device even more useful: A separate battery charger, a cheese-plate, a command unit, a top-bracket, a GPS unit and most interestingly a focus-motor that can be controlled via the Ronin’s focus-knob. Nothing of this has come out yet. But the focus motor has me interested!

Last but not least, I decided to get the SmallRig cage for the X-T3, which makes it possible to add an HDMI cable clamp to protect the rather flimsy micro HDMI port of the XT-3. The additional weight is not a problem for the Ronin-S.

A Word on Editing

For maximum quality I have recorded everything in 4K using the H.265 10Bit 4:2.0 400MBit/s all Intra codec. Even though I’m using a 18 core iMacPro with the Radeon Vega Pro GPU and a fast RAID, my system struggles with the codec, so I transcode to »Optimized Media« inside FinalCutProX or DaVinci Resolve respectively to get smooth editing speeds. 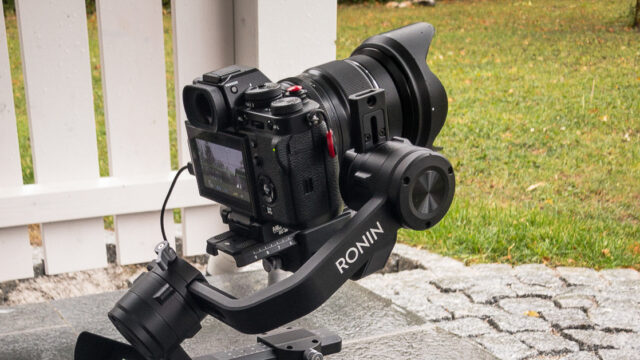 This DJI Ronin/ FUJIFILM X-T3-Rig combination is something that I’m confident now to take out on any shoot. The XT-3’s really good autofocus that includes face and even eye tracking makes it a breeze to use on the Ronin even without a focus puller and a wireless focus system, which makes it ideal for one-man-band shooters.

I intend to have the X-T3 and the Ronin in my trusty bus to keep handy for those jobs where budget does not allow for a larger gimbal or Steadicam, which to my opinion, it can not fully replace, yet…

Are you using either the Ronin-S or the X-T3 already? Are you combining the two too? Let us know in the comments below!