Starting with the bulkiest product of the new lineup, the G-SPEED Shuttle SSD is a high-performance solid-state storage device. Equipped with up to 16TB of SSD storage and fast Thunderbolt 3 technology it lets users edit 4K, 8K, VR, high dynamic range (HDR) or multi-camera footage in real time and quickly export projects either on location or at the studio.

Its compact design is built for easy travel between on-site production location and the studio for post-production which speeds up the whole process. Dual Thunderbolt 3 ports not only provide transfer rates of up to 2800MB/s but they also allow users to daisy chain up to five additional devices so they can stay connected to multiple drives, 4K displays and more, through a single connection to the computer. 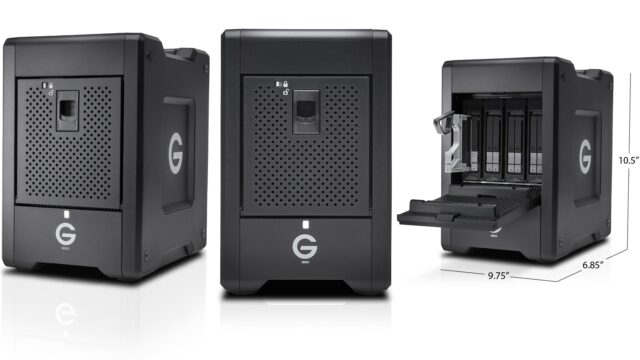 Built for multi-stream 4K, 8K, and VR production workflows and offers the bandwidth to support multi-camera editing in real time, render footage with multi-layer effects, and quickly export the projects. The G-SPEED Shuttle SSD device has 8 separate SSD slots and comes in RAID 5 out of the box and supports RAID 0, 1, 5, 10 and 50 to provide a versatile and flexible storage solution.

The G-SPEED Shuttle SSD comes in either 8TB version which will cost $5,100 USD or 16TB version with a pricetag of $7,600 USD. It is compatible with macOS from 10.12 or Windows 10 or 7 (after reformat) and comes with a 5-year limited warranty, 8 removable SSD modules, 40Gb/s Thunderbolt cable and a power cord.

Second product of the new G-Technology SSD line is the G-DRIVE Pro SSD. It also has dual Thunderbolt 3 ports featuring the same maximum speed of 2800MB/s and the possibility to daisy chain up to five additional devices through a single connection, so the computer can stay connected to multiple drives, 4K displays and more. 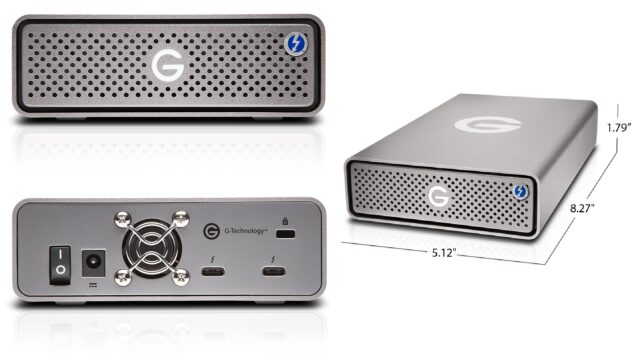 The G-DRIVE Pro SSD comes in either 960GB version which will cost $1,400 USD or 1.92TB version with a pricetag of $2,100 USD. It is compatible with macOS from 10.13 or Windows 10 (after reformat) and comes with a 5-year limited warranty, 40Gb/s thunderbolt cable and an AC power adapter.

Last but not least, the G-Technology presents a portable rugged G-DRIVE Mobile Pro SSD. The smallest product of the new SSD line also sports the Thunderbolt 3 technology with transfer speeds of up to 2800MB/s. The newest version of the Thunderbolt 3 port allows user to plug in to a compatible computer and instantly extend the storage without the need for external power.

The G-DRIVE Mobile Pro SSD drive provides shock-resistant storage in a durable case with 3-meter drop protection (tested on a carpeted concrete floor) and a 1000lb crush-proof rating. A protective aluminum core prevents overheating to maintain a high level of sustained performance, while a custom enclosure insulates the drive so heat doesn’t transfer to the exterior of the device when in use. 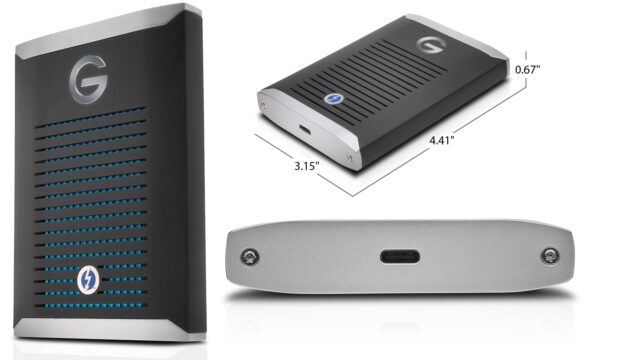 The G-DRIVE Mobile Pro SSD comes in either 500GB version which will cost $650 USD or 1TB version with a pricetag of $1,050 USD. It is compatible with macOS from 10.13 or Windows 10 (after reformat) and comes with a 5-year limited warranty and 0.5m 40Gb/s thunderbolt cable.

What do you think about the new Pro SSD line from G-Technology? Can you see yourself using any of the drives? Let us know in the comments below.