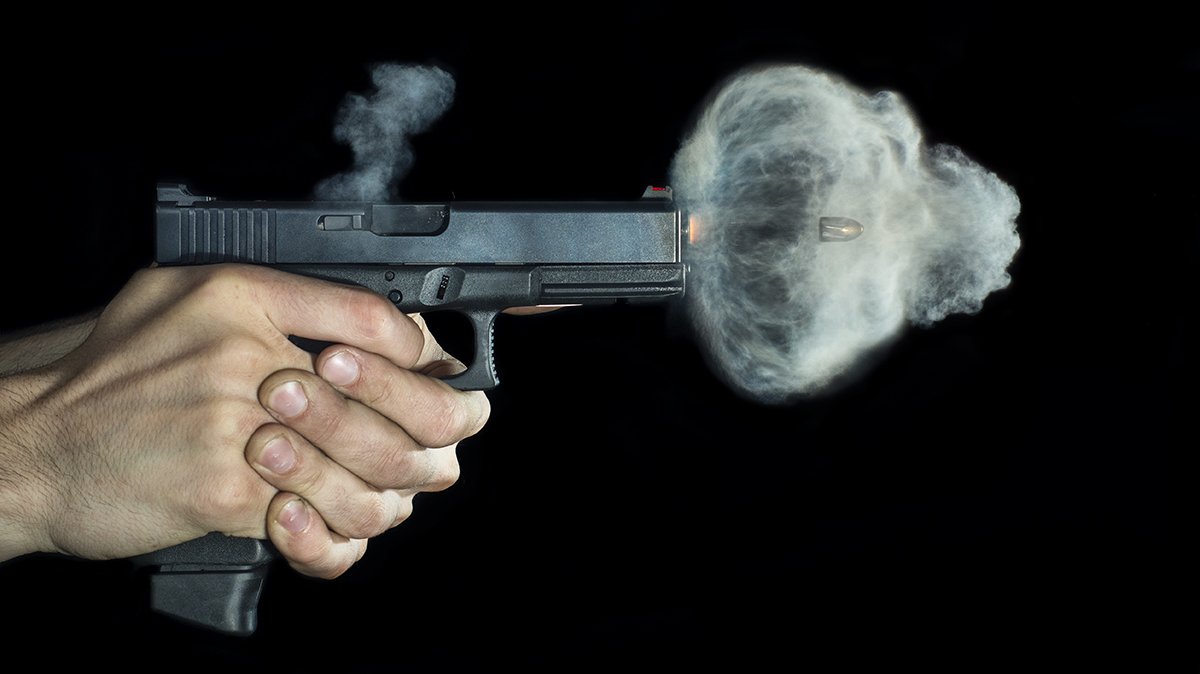 Let’s face it, slow motion is bad ass. You don’t get more bad ass than this amazing shot of a .500 S&W Magnum by Herra Kuulapaa (www.kuulapaa.com). While this may be an extreme example, and it’s a still, not a grab from motion, nothing gets the imagination going quite like the ability to shoot high frame rates.

Give yourself the edge by understanding the fundamentals of global vs rolling shutter, shutter angles and exposures at high frame rates.

A few weeks back I wrote an article “8 Essential Steps to Perfect Exposure – The Knowledge Any Cameraman Should Have”. If you haven’t read it yet, now would be a good time to do that, and then come back to read this one.

During exposure the film is held perfectly still, often with registration pins. While the mirror shutter covers the film gate, the pins mechanically disengage and the pull down claw physically advances the film to the next unexposed frame.

Many electronic shutters in digital cinema cameras feature a rolling shutter, where data is read out line by line from the top of the sensor to the bottom before being reset ready for the next frame exposure.

A rolling shutter can exhibit a noticeable skew of would-be vertical lines in the image if either the camera or subject is moving quickly across the frame. This can create unwanted motion artifacts warping the whole image if the sensor read-out is particularly slow and there is fast motion in the frame. Most rolling shutters are incredibly fast, minimizing potential problems. Red and Arri among many others employ rolling shutters, and the results can lend a more “cinematic” feel than a global shutter.

Even extremely high frame rate cameras such as the Phantom digital cinema cameras from Vision Research employ rolling shutter, but with a readout-time of only 1 millisecond.

In this chart you can compare rolling shutter readout-times of different camera models we tested in our lab: A global shutter differs from a rolling shutter in that at the end of a full exposure, light is blocked entirely across the sensor all at once while data is then read and it is reset for the next exposure.

A global shutter preserves the perfect vertical alignment of vertical lines or objects moving horizontally through the frame. However, the feel of motion can be noticeably different.

Depending on how a global shutter is implemented, there can be a small cost in light (fill factor) and possibly dynamic range when compared to a rolling shutter.

Mechanical shutters for the most part are gone in digital cinema cameras, but often the terminology has stuck.

It can be calculated easily to a fraction of a second exposure time.

For example, at a frame rate of 24fps at 180 degree shutter (180 degrees is considered normal):

Here is a whole table calculated for 24fps for shutter angles up to 220 degrees:

If we consider 180 degrees as the base (normal) angle as “Full Exposure”, the following compensation table applies. In the age of digital cinema, more than ever before there is a demand for high frame rates in our cameras. This used to be a specialty requirement but is now expected.

Capturing the spray of ocean waves in crisp frozen detail, liquids pouring or simply the beauty of smooth slow motion is no longer out of our reach. Many cinema cameras can now shoot at least 60fps if not much higher.

Vision Research has been on top of extreme high speed cinematography for some time. While 1000 – 2000fps is still out of reach for most of us, cameras like the Phantom Flex 4K are pushing the limits of what can be achieved.

Be aware of how high frame rates impact your exposure (and light requirements). For any camera, regardless of sensor, regardless of manufacturer the same rules are true when it comes to high frame rates and exposure. It’s purely mathematics.

Every time you double the frame rate, you are halving the exposure time for each frame… and halving the amount of light hitting the sensor.

For an example, lets assume a “normal” shutter angle of 180 degrees.

If we double the frame rate to 48fps, with the same shutter angle we halve the exposure time to 1/96th sec. We’ve just lost a full stop of light and are only at 48fps.

Let’s extrapolate this out and I’ll rather use 25fps as a starting point instead of 24fps because it will multiply out with round numbers:

Of course frame rates can be anywhere in between these numbers but I’ve simply doubled it every time for the example.

So you can see we’re losing a stop of light every time we double the frame rate.

Losing a full stop is not a small amount of light. Every stop lost is a halving of light.

Just as a change in shutter angle at a normal frame rate affects exposure time and requires a compensation to be made in lens aperture or lighting, high frame rates require even more compensation beyond just opening up the lens.

This means if you have enough light for a correct exposure at 25fps and you don’t want to affect your depth of field (by opening up your aperture), you’ll have to double the amount of light used to light your scene or subject to get the same correct exposure at 50fps.

The sun gives us plenty of light for this, so outside under daylight, compensating for the much shorter exposure times when shooting high frame rates is much less of an issue.

However, inside under artificial lighting… you have to crank up the light seriously (double it) every time you double the frame rate.

It’s normal that high speed table top shoots for instance require a ton of light. If you are on set when shooting a product shot involving a liquid pouring and they have a Phantom on set shooting at 1000fps, they will have serious light on that product.

When it comes to high frame rates, a higher “native” base ISO or exposure index (EI) is always beneficial. Keep this in mind when comparing cameras. Every sensor is different and every camera will perform differently capturing high frame rates.

If a particular camera gives brighter images at high frame rates, it’s either because the sensor has a higher base ISO or it can be pushed above its base ISO with acceptable noise.

Base sensitivity of a sensor is down to many things, simplest of which is the size of the photosites (but that is a huge simplification), and this is determined by how many of them are crammed onto the sensor. If you increase resolution (or number of photosites) and keep sensor size the same, the photosites get smaller and as a generalization, base sensitivity will decrease.

In the end regardless of all this there is “shot noise”, a minimum level of “noise” when counting or detecting small numbers of photons that is due to variations in quantum probability. If you throw one single photon at a surface with 50% reflectance, there is a 50% probability that it will be reflected or absorbed. So that surface could show up if the photon is reflected and detected at a photosite, or it could be black if the photon is absorbed rather than reflected.

The more photons that are thrown at the surface, eventually probability dictates that 50% will be reflected and 50% will be absorbed. If you flip a single coin, it will land either heads, or tails but there can only be one possible outcome and the probability is equal it could land either way. If you flip 1000 coins, you should on average count 50% heads and 50% tails.

I don’t want to over-play “shot noise”, it’s only a factor at extremely low light levels, but I just want to point out that even if an image sensor is otherwise perfect (which none are), it does define a impenetrable minimum noise floor that is simply down to quantum physics. Other types of noise also come into play such as Fixed Pattern Noise (FPN) which is caused by non-uniformities of the sensor in the manufacturing process. FPN is fixed and can be mapped out, however other types of temporal noise are more difficult to reduce.

A image sensor will always perform best when there is plenty of light, and when you have very short exposure times for each frame (as in pushing higher frame rates) the only solution is more light.

As I have explained before in “8 Essential Steps to Perfect Exposure – The Knowledge Any Cameraman Should Have” exposing your sensor properly is the single most important key to achieving the image you envision seeing beautifully graded and finished after post production.