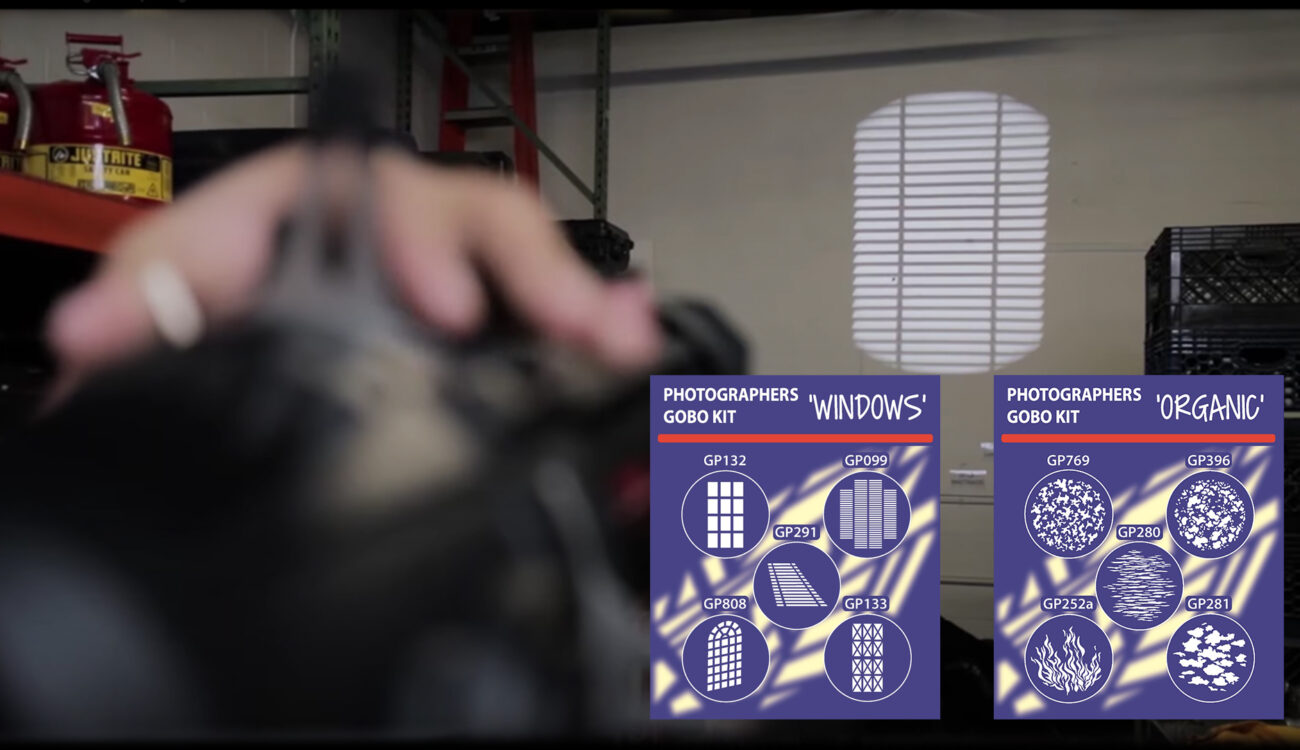 Lighting technology was once divided into three separate categories. Photography had strobes, film and video had tungsten and HMI, while theater productions leaned heavily on modifiers to craft different lighting effects on stage. Eventually, photography and film/video lighting began to overlap as LEDs began to take center stage. Now, theater technology is crossing the boundary into the realm of photography and video with the GoboPlus Kits. What’s a gobo and how does it help creatives craft their visuals? Let’s find out!

Gobos are thin metal circles that have designs etched or punched out in their center. By inserting these disks into a lighting fixture, lighting designers are able to use light to craft physical elements onto a theater stage. Do you need light in the shape of a window? There’s a gobo for that. How about the shadow of a tree? There’s a gobo for that, too.

Think of it like shadow puppets for lighting design. As lighting companies that strictly focus on continuous video or photography lighting expand their list of products, gobos are now finding their way into people’s tool kits. The GoboPlus kits aim to take advantage of this crossplay. By utilizing theater tech, they’re hoping to bring the same creative opportunities from the stage, to the film set.

Founded in 2013, GoboPlus has done one thing: make gobos. After noticing photography and film creators purchasing their products, GoboPlus is expanding its selection to meet this new need. While gobos have strictly been used in theater, the introduction of products such as the Aputure Spotlight Mount, and their own gobo line, have shattered whatever boundary remained between the mediums.

Each kit has five different gobos that fit popular light sources. According to GoboPlus, they offer compatibility with Pixapro, Bowens, Aperture, and Broncolour fixtures to name a few. However, this is not a one size fits all solution, and users will have to figure out which adapter they need in order to use the gobos. For example, the GoboPlus kits won’t function with Aputure lights without the Spotlight Mount.

Sizing is also an issue. Using the Aputure Spotlight Mount again as an example, users will need to purchase the B size gobo which is 86mm in diameter. Anything larger won’t fit and anything smaller will leak light through the gobo disk and defeat the purpose.

If you are a photographer or filmmaker who utilizes silhouettes in your lighting setups, gobos are a must-have in your kit. The GoboPlus kits for photographers and videographers are priced at £65 (~$86.20), which is a reasonable price for the creative opportunities they offer.

Aputure does offer a 10 gobo kit for $59, but their selection is limited when compared to GoboPlus. No longer will you have to flag your lights to create the window silhouettes or use tree branches to create the necessary effect. Gobos are your answer.

Check out the selection GogoPlus offers via their website.

What do you think of this offering from GoboPlus? Is this a tool you want in your kit? Let us know in the comments!