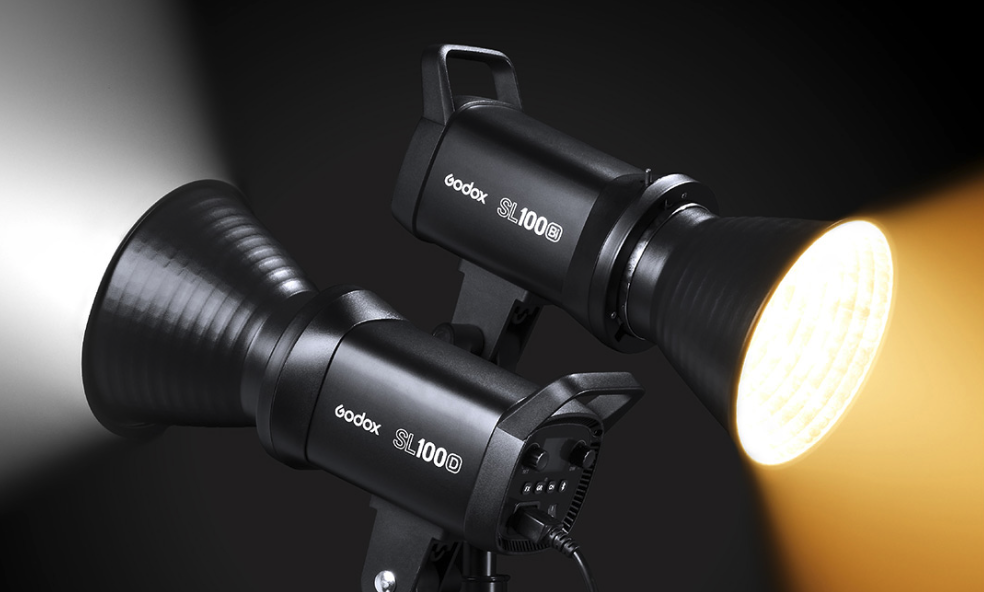 Two versions of a brand new light from Godox are now available for pre-order. The Godox SL100D and SL100Bi LED Video Lights, both in daylight and bi-color variations, come with a slew of new features and controls that will help filmmakers and creators light on a budget.

With another set added to their SL line of monolight-style LED lights, Godox continues to build a strong lineup that aims to be a strong competitor for Aputure’s Amaran and Lightstorm Series. The SL100 will join SL60, SL150, and SL200, and will be the second light in the series to offer a bicolor option.

A built-in umbrella mount, along with a Bowens accessory mount, will allow for a wide range of options to modify your light. From reflectors and softboxes to Fernsel and grids. There are too many options to name but with the Godox SL100D and SL100Bi only costing between $199 and $299 respectively, these savings can be put straight back into the budget!

These dimmable monolight form factor lights are highly compact at under 10″ in length and are the perfect addition to any budget-conscious kit. The SL100D is daylight balanced to 5600K, matching its counterpart the Amaran 100D. The SL100Bi however, allows for variable temperature control from 2800K to 6500K. This is about a 100K difference on the low end when compared to the Amaran 100X.

Amazingly, these Godox twins are said to maintain their 32,100 Lux intensity at 1 meter with help from the included reflector. But that’s not all. Both are dimmable from 0 to 100% and have a CRI/TLCI rating of 96+/97+.

The Godox SL100D and SL100Bi Video Lights have an intuitive user interface on the back, with two dials and four buttons. If you happen to have the lights tucked into a corner next to the ceiling, wireless control is also available! The Godox Light App and an optional RC-A6 Remote allow for full control and customization.

Speaking of customization, multiple SL100 lights can be arranged into 32 channels and 16 groups. In case you want to use your Bowens mount to make a space light grid or create a crazy Roger Deakins Bladerunner ring light on a budget.

What makes them special

Both lights come with Special FX modes that give you more versatility on set. The SL100D includes three variations of the Lighting effect, Flash, Conference, Paparazzi, Television, and Broken Bulb.

The SL100Bi includes three additional FX modes called Candle, Fire, and Firework. While most of these seem pretty self-explanatory, it is up to you to find a use for the other ones!

The Godox SL100D and SL100Bi are now available for pre-order on B&H. They are priced at $199 for the daylight model, while the bi-color light is priced at $299. There is a pre-order price for the SL100D that brings it down to $179. Both lights are labeled as coming soon, but no fixed date has been given.

What do you think about these new lights? Will they make their way into your lighting kit? With the savings making more room in your budget, what other things would you do to make your set vision a reality?