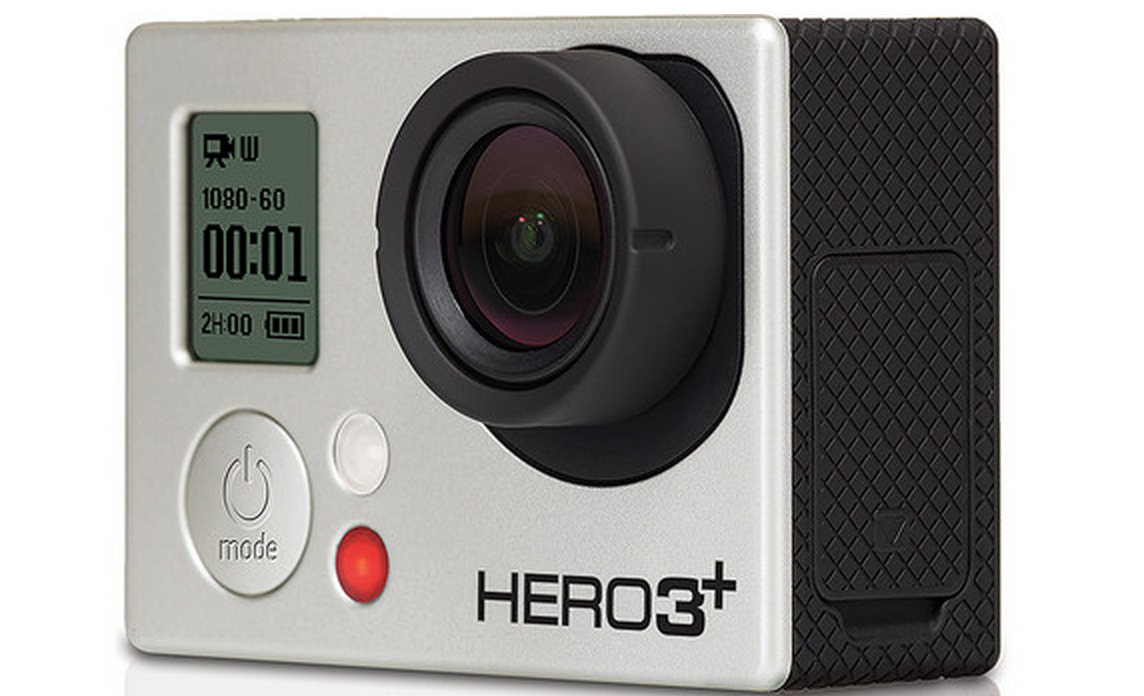 The much-rumored GoPro Hero 3+ has been released. Boasting a new lens, sleeker design, increased battery life and better audio (amongst other features). It’s available in both Black and Silver edition and retailing for the same price as previous respective GoPro Hero 3 models.

That’s it in a nutshell, let’s have a look at the features in more detail: GoPro lists the Hero 3+ as being 20% smaller and lighter, but this isn’t a direct reference to the physical size of the actual camera body. The Hero 3+ ships with a new, snugger waterproof housing; it features improved buttons and is submersible up to 40M (previous Hero 3 casing offered up to 60M). This is where the “20% smaller” comes in, which is good news as it means that the Hero 3+ is still compatible with the larger Hero 3 casing.

It must account for the weight loss also, as the comparison of the Hero 3 and Hero 3+ camera bodies shows there’s only 2 grams difference (75g v 73g).

The Hero 3+ has a new lens, which is broadly classified as increasing image quality and sharpness by 33%, and reducing imaging artefacts by x2. Pretty ambiguous terms but this is targeted at the pro-consumer therfore terms like this are expected. Looking at the technical info, the specifications of the lens remain the same; both the hero 3 and hero 3+ have a fixed 6-element aspherical lens with f/2.8 aperture.
From what GoPro have stated, I’d expect a small increase in image sharpness, dynamic range and increased read/reset time from the sensor to reduce CMOS wobble (reference to the ‘reduced imaging artefacts by x2’). Reduced image distortion is also mentioned. All probably achieved by better quality glass and firmware tweaks. Time will tell what has been addressed when a proper side-by-side comparison has been carried out.

Looking forward to seeing some static split screen side by sides of the Hero 3 and Hero 3+, along with 400% blow ups.

Here is the official Hero 3+ teaser: Another new feature is SuperView. SuperView is available in both 1080 and 720 modes, and offers a wider angle of view; this is in edition to the current 3 stage field of view settings offered by the Hero 3.

The Hero 3+ also gets a new battery, which is said to be 30% more effective with the Hero 3+. The battery is the same physical dimension as the previous Hero 3, just with an increase in capacity (1180mAh v 1050 mAh).

Audio gets a nod of improvement also, GoPro state “Advanced wind-noise reduction technology keeps the audio clearer during high speed activities”. The above video compares audio between the Hero 3 and Hero 3+, and there does seem to be an improvement. Mic placement on the Hero 3+ has changed from each side of the camera body to one side and the top.

GoPro boast a new feature called “Auto Low Light Mode”. Which is said to change the frame rate based on lighting conditions to enhance low light…. Sounds like a feature best left off if it really does work like that.

Lastly, the Wi-Fi feature gets some treatment and is said to be 4X faster than the previous. This will help greatly with reducing latency with wireless devices connected to your camera. Sadly, as some were anticipating the resolution and frame rates remain unchanged. 4k and 2.7k resolutions are still limited to 15 fps and 30fps respectively. It’s these resolutions exceeding full HD that divide the Black and Silver editions of the Hero 3+. The new lens, SuperView and Auto Low-Light feature are also missing from the Silver Edition. The White Edition receives no plus update.