In Part one of my GoPro Hero6 Black review, I had a look at the camera’s various shooting modes. This was good preparation for my five-day mountain bike trip to Costa Blanca, Spain. Read on for some real world tests of the new GoPro Hero6.

In Part one of my GoPro Hero6 Black review I identified the following modes as having the best image quality, and were the ones I predominantly used on the bike trip:

None of these provide internal image stabilization, which was fine for me as I also took the GoPro Karma Grip (reviewed here). The Karma Grip provides fantastic stabilization and also powers the Hero 6, so no spare batteries were needed.

Sidenote: Initially, the Karma Grip did not recognize the Hero6, and even after updating to the latest firmware (v1.51), it wouldn’t always recognize the camera. This is very annoying, as the camera freezes showing a „USB connection“ message, requiring you to pull the battery from both the grip and the camera. Not nice out in the field!

The same happened with the older Hero5 model. I find it quite annoying that even the latest Karma Grip firmware from August 2017 does not eliminate thise issue, as it sometimes it feels you’re being treated like the Beta tester of a product that was actually released over a year ago!

As the GoPro Hero6 housing is the same as the Hero5, I was able to use the PolarPro ND filters (mostly an ND32, reviewed here) which provide a nice motion blur for the lower frame rates, like the 4K 4:3 24p mode.

This mode is very useful in conjunction with a GoPro chest mount, as it gives a nice point of view of the trail including the handle bars in the foreground. The 2.7K 120p and 1080 240p modes were used for the slow motion sequences. Other gear used was a Sony a7S II and a DJI Mavic Pro drone. 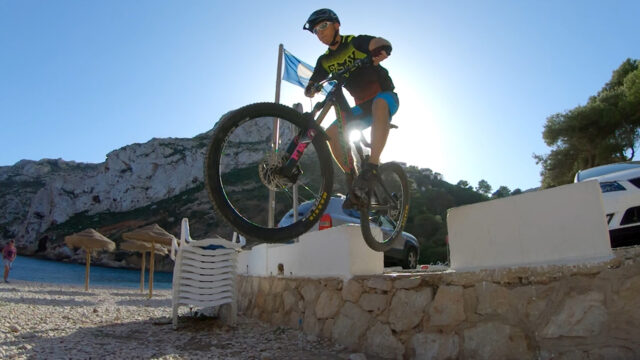 Having used the Hero6 for almost a month now, and after reviewing all my footage, it is clear that this camera is a massive step up from the Hero5. Image quality, colors out of the box (use the „flat colors“ settings, as „GoPro“ is heavily saturated), resolution, framerate capabilities and the new HEVC (H265) codec are all really amazing. Also, although manual controls are available, auto exposure and white balance work very well – a very important feature for an action cam!

Another big plus is that the dynamic range has been improved over the previous version. The GoPro Hero6 just holds the highlights much better while retaining the shadows, which I confirmed by doing a little side by side test of the same scene with both cams. Where the Hero5 would start to blow out the sky, the Hero6 still managed to show a blue sky.

If GoPro would offer options like an external microphone (usable with the Karma Grip), or a rectilinear wide angle lens (or a selection of exchangable lenses?) they could significantly up their game into pro territory. As for now, yes, they made it to the top – but the competition is tough and will soon catch up.

I hope you found this GoPro Hero6 Black review of some use. If you want to see more of my films, head over to my Vimeo channel.