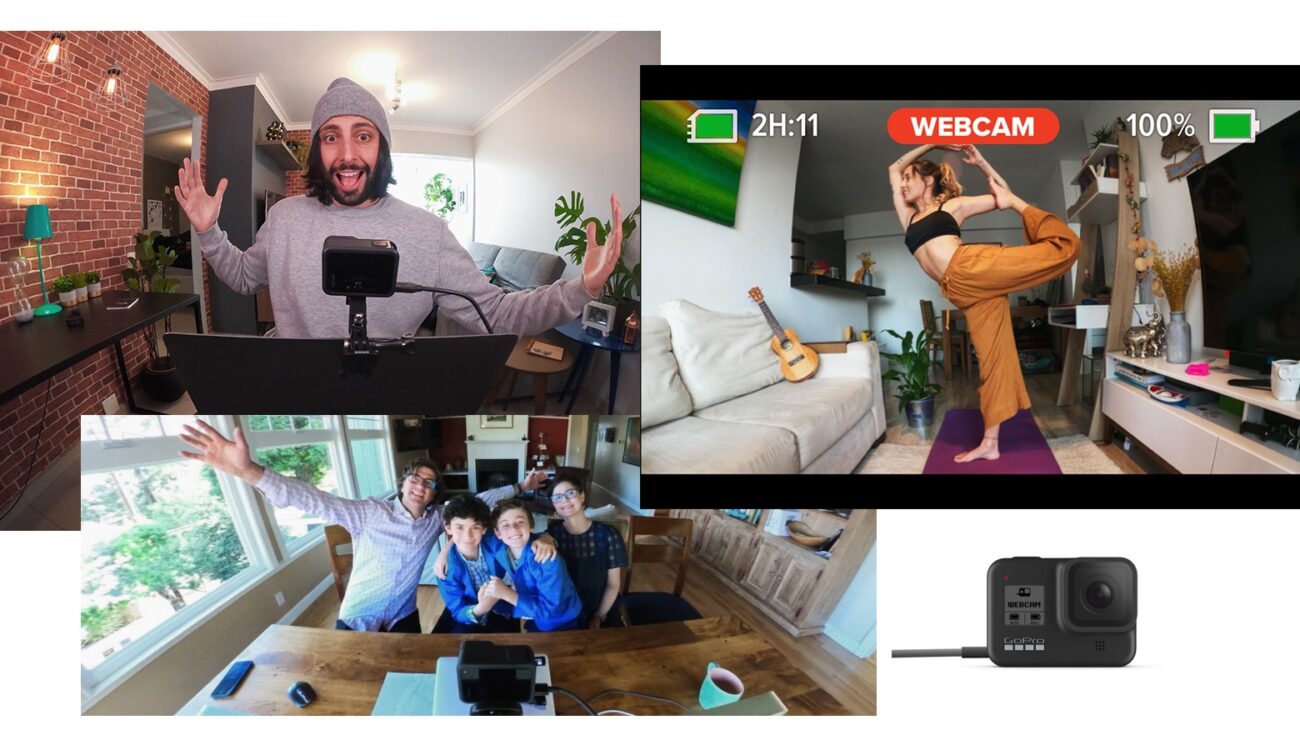 GoPro released a new Webcam Beta desktop application that enables its GoPro Hero8 Black action camera to act as an HD webcam. The camera has to be updated with the new beta firmware and connected to a macOS computer via USB-C cable. The webcam beta is currently compatible with Zoom, Microsoft Teams, Google Meet, Discord, and BlueJeans as well as Webex, Skype, Facebook Rooms, Facebook Messenger, and Slack when accessed via a Google Chrome Browser on macOS. A Windows version is in development.

GoPro is joining all the other camera manufacturers that released webcam software for their products in recent months. The company released the Webcam Beta app that gives its flagship action camera HD webcam functionality. There are certain limitations, however. Let’s take a short look at the new webcam feature for GoPro.

As the title already implies, the new Webcam Beta only works with GoPro’s latest action cam – Hero8 Black. That is a pity because there are still many Hero7, HERO6, or even older generations out there. Another limitation is that the Webcam Beta app is currently only available for Apple macOS users. GoPro says, however, that they are working on a Windows version. Let’s hope it will get released soon.

GoPro Webcam Beta will turn the GoPro Hero8 Black into 1080p wide-angle webcam (it can also be switched to 720p if needed). There is no need to use any third-party accessories. It only requires any USB-C cable for connection with a computer.

In order to start using the GoPro webcam functionality, first, you need to install the free beta camera firmware onto the Hero8 Black. Then, the new GoPro Webcam desktop utility has to be installed on the computer. After plugging the Hero8 Black in the computer with any USB-C cable, simply choose GoPro from the list of available camera sources in the streaming or videoconference software. GoPro prepared a step-by-step guide for the whole process.

The Hero8 Black and the GoPro Webcam desktop utility are currently compatible with Zoom, Microsoft Teams, Google Meet, Discord, and BlueJeans as well as Webex, Skype, Facebook Rooms, Facebook Messenger and Slack when accessed via a Google Chrome Browser on Mac OS. To ensure Chrome recognizes GoPro Webcam as an option, click the Chrome’s menu button (top-right corner) then navigate to Settings > Privacy and Security > Site Settings > Camera to approve GoPro as a camera input source.

The GoPro Hero8 Black can also be used for live streaming to YouTube and to start new movie recordings in QuickTime. Users can select if they want to use a wide, linear, or narrow FOV for streaming.

For older GoPro camera models, the webcam setup requires an HDMI – USB converter (capture device). This is possible on GoPro Hero4, HERO5, HERO6, and Hero7 Black models. There is a useful how-to on GoPro’s website. It is also worth noting that  GoPro Hero8 Black, Hero7 Black, and MAX cameras already support wireless live stream direct to Twitch, YouTube, and Facebook. Via RTMP, users can live stream to Vimeo, Facebook groups, and Workplace by Facebook.

GoPro has a special section of their forum on GoPro Support Hub where you can ask questions about the new Webcam Beta or look at some solved issues.

Are you planning to try the Hero8 as a webcam? Did you ever need a wide-angle fisheye perspective for streaming or video calls? Let us know in the comments underneath the article.