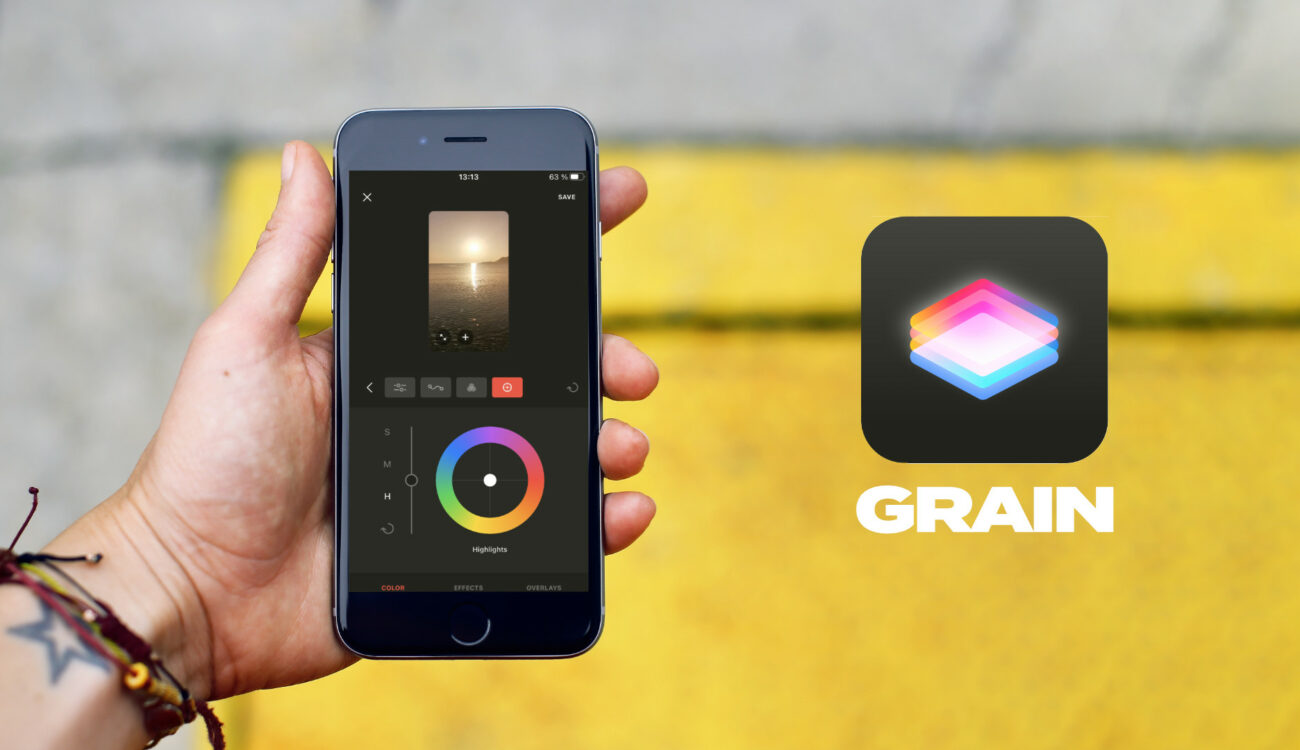 Grading on an iPhone? The new Grain app by Moment is an iOS app for stylizing videos with color correction, film and VHS tape effects, and more.

The Grain app is made by Moment, who are known for their smartphone lenses and accessories to improve mobile filmmaking. Recently they also started producing filters like variable ND filters and diffusion filters.

Moment isn’t new to making apps, either. They made the Pro Camera App, a camera app with advanced video settings and features, similar to FILMiC Pro. They also have RTRO, another camera app, but focused on “fun”, ease of use and retro filters.

Grain on the other hand is not made for capturing content, but it’s focused on the post production. It has multiple color correction options, filters and overlays.

You also have an edit feature, enabling you to cut multiple videos together. It’s handy for trimming a video and maybe splicing two or three clips together, but it’s not for serious editing work. There are other suitable apps for this like LumaFusion or Premiere Rush.

Going over the color features, there are quite many of them. You can start out with basic corrections like brightness, temperature, tint and contrast. But you also can make use of curves, a color mix panel and primary wheels.

Next you have the effects. There are many to choose from, like Grain, Dust, Light Leak, Bloom, Blur, Directional Blur, Sharpener, Vignette, Fisheye, Color Shift, Chroma Damage, Scanlines, Color Warp, Tape Noise and Tape Wrinkles.

Then there are overlays. These are pretty simple as they either multiple the image several times over the screen, and/or it puts a screen matte over the image. This way you can emulate a super 8mm style look. There are also options for adding text on top, a sprocket (which is just a square or circle you can put anywhere), a date or time stamp.

Both effects and overlays have many presets, but you can customize each one of them to your own taste.

When you’re done you can export the Video as .mov or .mp4, but you can also export a LUT or the overlay (like grain or matte). Another option is to save the look, which means it saves all color corrections, effects and overlays to a preset you can then use on other clips. For users who need to produce content in a consistent style this is ideal. This look can also be shared across devices if you want others to use the same visual style.

The controls remind me of Lightroom Mobile. I’d say this is good, as Lightroom Mobile is already quite intuitive and has simple but powerful controls. Sometimes Grain tries to be too minimalistic though, as sometimes there are back buttons missing and things aren’t always labeled. Some icons are quite confusing as e.g. the plus icon on the clip acts like a home or back button moving you to the main screen.

How’s the color correction? Well, it’s not bad. It’s obviously not comparable with the fine controls of Resolve. I had a hard time precisely controlling the primaries wheel. The UI allows for coarse adjustments, you won’t be able to be super precise though. But it has quite advanced features compared to other editing software, which are quite handy if your goal is mobile post production.

The effects are quite powerful, maybe a bit too powerful. It’s very easy to overdo them and in turn, have a heavily distorted video. I think if tweaked right they can be good, just be prepared to fiddle around with the controls.
The grain is a bit harsh and loses a lot of detail due to compression. Maybe this is something that Moment can fix with a better compression method in the future.

The live preview is good for color correction, but it can’t properly reproduce the way how the grain will look in the end. It has a quite low resolution and it’s choppy, and after exporting it had a different effect. The grain was mostly too hard for me, as it looked artificial and way too aggressive. The color corrections on the other hand were quite good and if tuned correctly can make for a quite good preset.

The editing is ok, but if you’re really looking for more or less sophisticated editing on an iPhone, I would use something else, like e.g. Premiere Rush or LumaFusion. It’s neither super time-efficient nor is it precise.

Who is Grain for?

I think it’s mostly for quick content creation “on the run”, if you run an Instagram channel and need to post content with a consistent styling and corporate identity. The presets allow you to define your own style. It’s obviously not as powerful as desktop applications are, but for mobile workflows it’s time-efficient, intuitive and produces good results.

Grain is available today on iPhone and iPad with different bundle and subscription options. Grain by itself costs either 4,99€ per month, 29,99€ annual or 74,99€ for a lifetime license. If you bundle it together with RTRO, it’s 6,99€ per month or 39,99€ annually.

Which mobile apps are part of your workflow? Let us know in the comments.