GripGear is a very compact, modular, and affordable motorized slider. It can carry lightweight cameras up to 1kg. During CP+ show in Japan, Johnnie Behiri talked with Hitotsuki-San, who now started distributing the GripGear system in Japan, about some of its features.

GripGear motorized slider has been on the market now for about half a year. It is suitable for filmmakers who travel very often and need a very portable motorized slider in their kit. The small size of course also means less payload. The slider can accommodate payloads of up to 1kg in a horizontal position and up to 750g in a vertical position. Yes, that’s right – the slider can operate at various angles and even in vertical position.

GripGear features a modular design, that means multiple tracks can be mounted together to create a longer setup if needed. The slider itself comes with 2 pieces of tracks, additional pieces can be purchased separately. Custom-made track connections enable track extensions over 1.5 meters without additional support, at an angle, thanks to reinforced joints.

The heart of GripGear is the motorised unit. It features 9 speeds ranging from 4mm/s to 1000mm/s and panorama speeds from 141mins per 360 turn to 0.57min/360. Just a side note – their website really claims speed can reach 1000mm/s, but that does not sound right to me. In my opinion, it is a mistake and there is an extra zero. 100mm/s sounds achievable and usable as a maximum speed. 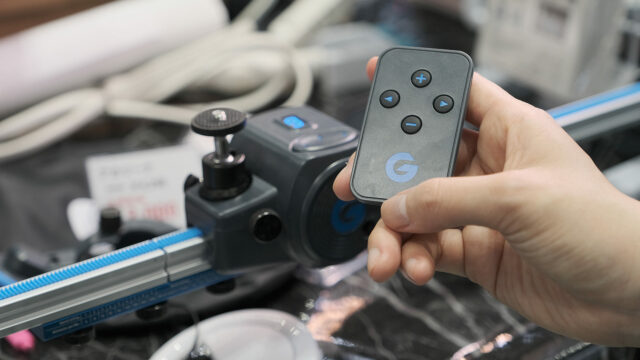 The slider can be controlled wirelessly with an infrared remote control or directly via buttons on the main body. The motor can either stop when it reaches the end of the track, or there is a continuous mode, which auto rebounds the motorized unit in the other direction when the end of the track is reached. GripGear comes with two physical stoppers, which can be clamped on the tracks and define stop points for the motor. The slider includes an internal rechargeable battery. For extended shooting time, the USB connector can be used with most standard power banks.

GripGear can be also used in a dolly mode. The simple dolly cart comes in the package – the motorized unit can be inserted in it and act as a portable dolly. For dolly mode, any of the 9-speeds can be used in automatic mode. Alternatively, flipping the ring upwards when using the Micro Dolly, or releasing the motor clip in other modes allows for manual usage. The wheels of the dolly can be set straight or at a certain angle to allow for curved ride. 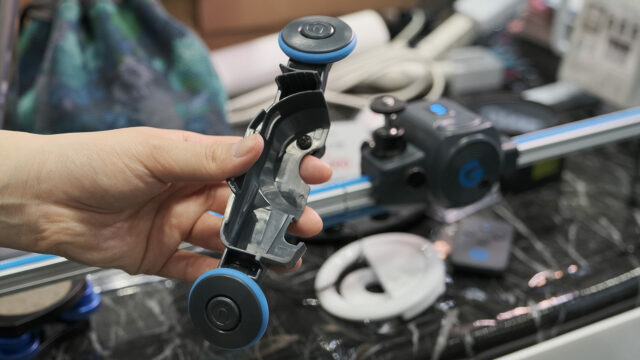 Last but not least, GripGear’s motor can also function as a 360 panoramic unit. Again, any of the 9-speeds can be used to film 360 panoramic footage. The motor inserts in the 360 mount and the device is ready to use.

GripGear is available for a very interesting price. The complete set (called directors set) is selling for $130 USD, the moviemaker set 2 (without dolly cart) sells for $100 USD and the extra piece of track costs $25 USD.

What do you think of GripGear? Do you use some kind of portable slider when traveling light? Let us know in the comments underneath the article.