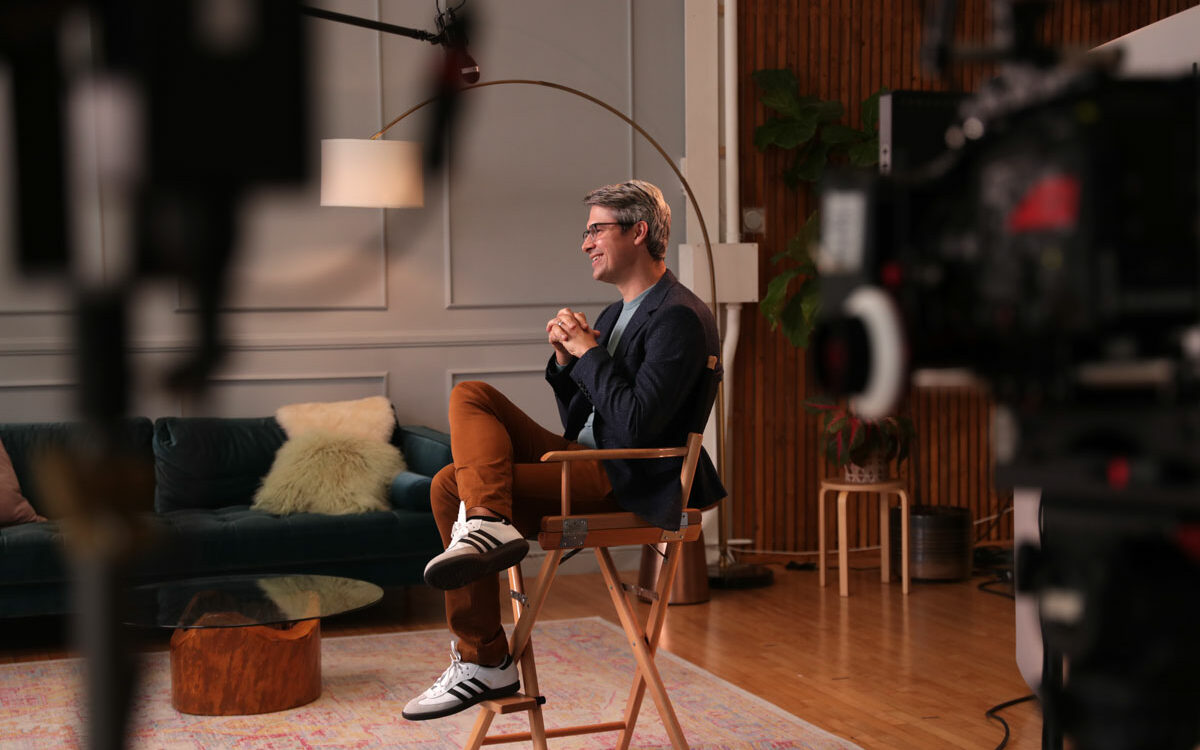 For many reality TV, news, and documentary filmmakers, you’ll often go out into the field as both a camera operator as well as the story producer. How do you juggle both of these tasks, being a producer-shooter, while also staying safe in unpredictable environments, and come away with excellent cinematography as well as a thrilling story?

In this module from Graham Sheldon’s Producing from the Front course on MZed (we reported about it here), we hear from Benji Lanpher, an Emmy-award winning filmmaker known for his work on National Geographic’s “Life Below Zero,” Sacha Baron Cohen’s “Borat Subsequent Moviefilm,” and his riveting documentary films for Vice on HBO.

Why work as a producer-shooter over a large crew?

In the Producing from the Front course, Graham and his interview subjects guide you through the many facets of the work of a producer. For the most part, he talks about scripted content – short films, features, and TV series. But in this lesson he dives into the work of a doc producer-shooter.

As a producer-shooter, the main guiding force is the ability to pre-plan while being able to pivot on the fly. That is one of the main reasons why producer-shooters are hired in the first place – their ability to quickly adapt while getting close to subjects, which means that they can be embedded into the story more easily. A small crew can chase the story, move quickly from location to location, and help make the subject feel more comfortable.

A small crew can also be a safer approach when dealing with potentially dangerous situations – it’s certainly less risk for a production company to send a small crew into an unpredictable scenario. In the lesson, Graham describes some of his experience filming the KKK and Black Panthers for the BBC, working with Bear Grylls in difficult environments, shooting run & gun for VICE, and filming at Chernobyl.

But ironically, because a shooter producer can enter into more dangerous territory, then by its nature the production will have safety as its number one concern. That is especially true if you are operating a camera while also making important decisions about where to take the story – often with little time to spare, and in foreign locations. If you’re responsible for keeping your crew safe, that should be your overriding direction.

When you have the doubly difficult task of being a cinematographer out in the field, while also producing a story, you have to ensure that your gear is dependable and doesn’t get in your way.

Comfort and ease-of-use is also a priority, especially if you’re handholding a camera or have it on your shoulder all day long. If you’re going out in the field as a producer shooter, now is not the time to try out a new rig or carry any non-essential pieces of gear.

You’ll also want to consider how you appear to your subjects, locals, and officials, and how that can change your access as you follow the story. Sometimes you want to exhibit a large, serious production, and other times you want to be a stealthy and minimal. But overall, comfort and dependability are the main drivers of your gear choices when you’re a producer-shooter.

How to plan the story as a producer-shooter

In documentary work, the story is as essential as scripted work, but it’s a fluid process from pre-production to the shoot to the edit bay. Graham recommends writing out a beginning-to-end bullet-point breakdown of what the story might be, several pages long, before you begin production. You may only hit on a third of the bullet points during the project, but the breakdown is an important overview that guides your story.

The story breakdown will also help you figure out your own idea of what the story might be, versus the perspective that subjects might have. You don’t yet know all the answers, so the questions you have at this story phase will help you create the narrative as you discover and learn more about the subject or subjects.

But in the end, as a producer-shooter you are in the field, shooting real life, and that is inherently unpredictable. You can do your best to plan before the shoot, and to arrange the edit to make a story appear like it flowed organically, but the shoot can be completely chaotic.

Interview with Benji Lanpher on “Life Below Zero”

That unpredictable nature of being a producer-shooter is what hooked Benji Lanpher, an Emmy-Award winning filmmaker. In his interview with Graham, Benji describes his producer shooter work on National Geographic’s “Life Below Zero” as the moment when he truly found his passion in filmmaking.

“I went out to Alaska and it was a small crew of us, four or five people. And I remember that first week, picking up the camera…there was no walkie-talkie and video village telling us how to shoot anything and it was just way more creative than I’d ever experienced on anything else.”

There’s certainly a freedom when you’re working with a small crew, embedded with a subject at a remote location, and it’s your responsibility to tell the story. But of course there are challenges as well. Often there is no sound person, so the audio production duties may be split between the crew. You’re also doing the DIT work, managing media at the end of the day, while prepping gear for the next day of shooting.

Staying on your toes is what makes it really exciting for Benji. “We’re always looking for what we call the left turn, or the curve ball. Which tends to be what’s really happening because we’re not trying to fabricate anything. We go along a story that we’re supposed to get, but if a bear walks into the territory, our garden building story might now turn into a bear chase or a bear hunt.” And when that moment presents itself, you have to be instantly ready with all your gear, batteries, camera and lenses, sound, as well as figuring out visually how it’s going to play out on camera and with the overall story arc.

Embedding with the subjects and environment

But for anyone who hasn’t worked as a producer-shooter before, perhaps the most surprising aspect is getting embedded with the subjects. For Benji, the immersive style of filmmaking is what keeps him going. He spends months at a time living with his subjects, and in the case of “Life Below Zero” he estimates he’s spent close to two years of his life living in Alaska with the show’s characters.

He says, “What’s great about that is it becomes kind of second nature, it’s not like we’re producing a scene anymore. It’s like we’re a group of people that know each other very well, and I know how to get certain things out of that person and I know when they’re getting upset, and I know when I could ask questions and when I can’t.“

Watch Producing from the Front with MZed Pro

There’s a wealth more knowledge about being a producer shooter in this MZed lesson from the course Producing from the Front. Graham talks more at length about shooting with uncooperative subjects, and Benji dives into his experience working with hostile subjects when shooting Borat Subsequent Moviefilm. They also go into more detail about the gear they’ve used to shoot reality and documentary series, the pay structure for producer shooters, and the different formats of documentary storytelling.

Producing from the Front is available to stream to as an MZed Pro member, an annual subscription that provides over 275 hours of filmmaking education, with new courses being added continually. For more information head to mzed.com and watch the first lesson of this and other courses for free.

What’s your take on working as a producer-shooter on documentaries instead of being only the shooter? Let us know about your experiences below!