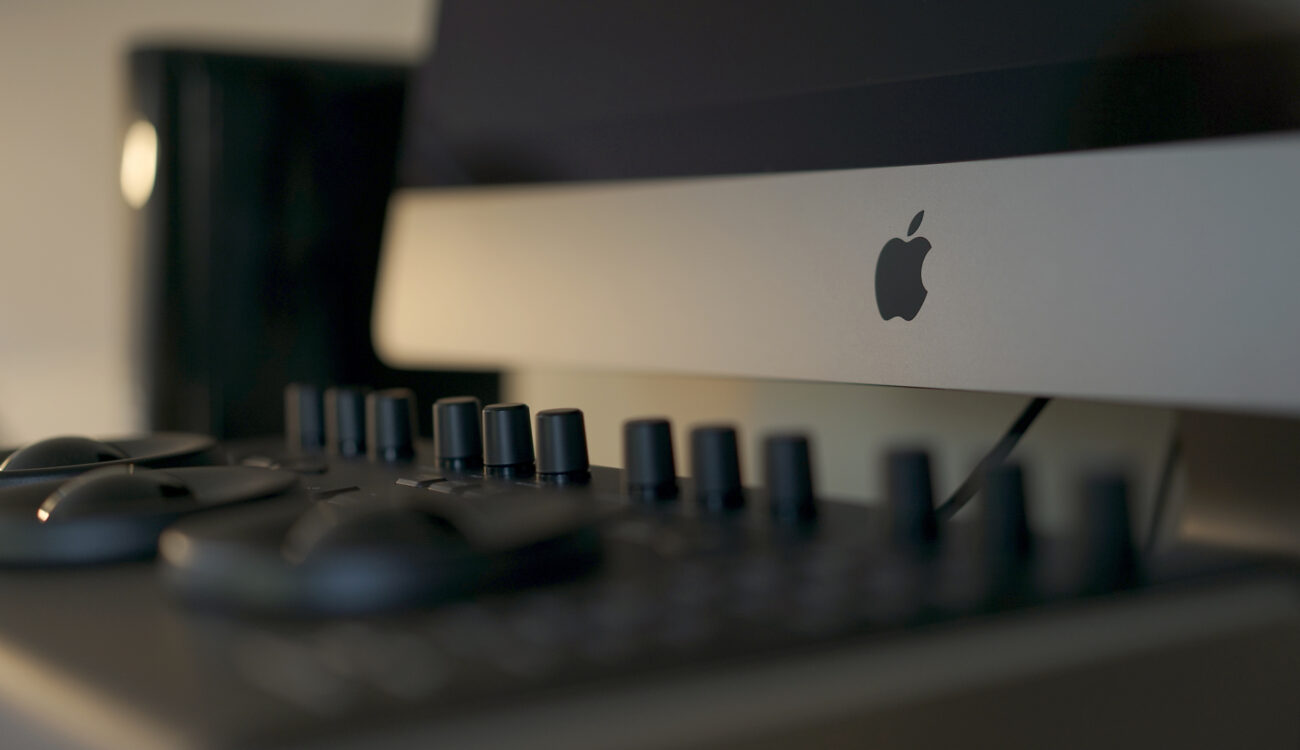 As we reported last month, Apple is now shipping the new iMac Pro. Like a lot of people, I was excited to get my hands on the fastest Mac ever created. Having tried it out on a project for the past two weeks, I thought I’d share my iMac Pro hands-on review with you all now.

Out of the box

The first thing I noticed, of course, was the beautiful slate grey finish of both the iMac Pro and its accessories. Now that black is back, I guess champagne gold won’t be far around the corner! Aside from its good looks, the next thing to tickle my fancy was the huge array of ports on the back. Having committed to updating all my peripherals to USB-C last year, I was already in good shape to take advantage of the four Thunderbolt 3 ports. The inclusion of four USB 3 ports were still welcome, however, as it meant my legacy external SSDs and DaVinci Resolve 14 dongle could easily be accommodated too.

The unit I’ve been reviewing is the mid-range iMac Pro, which I think gives the best balance between cost and performance. This configuration can be yours for the princely sum of £6,332.50 excluding VAT…

Now, I’m not for a minute going to pretend that that isn’t a lot of money to spend on a computer. However, those that refuse to see beyond the price are ignoring that this is a hell of a lot of premium hardware Apple are giving us. I’d argue it represents better cost per performance than the Mac Pro did when it re-launched in 2013, and pretty much every facility I visit has a Mac Pro in their suite(s).

As you may have heard, the iMac Pro can’t be opened up by the end user, have its innards ripped out and be upgraded with new bits. This seems to have got some people rather cross, which I must say I find amusing. You can’t even stick a micro SD card in the £1,000 iPhone X, for goodness sake; why are people surprised that the iMac Pro isn’t user-upgradeable?! Seriously, though, while this may be of concern to a facility looking to kit out a building with many, many workstations – where their priority will be prolonging the usefulness of these systems to avoid having to sell/chuck out kit for as long as possible – it is of no concern to me, nor to most small businesses. For those who do want user-upgradeability, Apple is working on two new solutions right now – an external Thunderbolt 3 breakout box and an all-new modular Mac Pro. But for me personally, the last thing I am interested in is ripping apart my computer and swapping out components. After all, it’s not 1977 and I don’t spend my evenings at a home brew computer club! These days, I think most individuals simply buy the best thing they can afford that will eat up everything they throw at it, and when they feel like it’s not quite coping with what they’re asking it do to (probably in two or three years’ time) they will sell it and put that money towards the next one. And Apple computers still keep their value remarkably well, just check listings on eBay.

OK, I’ll be honest, this is not one of those reviews with lots of benchmarks. That information is already out there anyway and, to save you the bother of reading them, they all show that the iMac Pro is faster than anything else Apple has ever made. For me, I was far more interested in knowing whether or not it felt faster. Too often I buy something because it is 30% better at this, or 2x better at that, but you get it home and play with it, and those numbers just don’t translate into real life gains. So, rather unscientifically, I started editing a project I had logged on my MacBook Pro to see if I would immediately feel the difference.

I did. Oh, boy, did I feel it! I mean, this thing is just silly fast. Every time it rendered, or analysed my clips for stabilisation or optical flow, I would watch with delight as the little background process wheel span around so fast, you’d miss it if you blinked. Playing back 4K, 6K, even 8K footage didn’t seem to bother it in the least. It would occasionally drop a frame here or there if I was playing back 8K ProRes 422 HQ, but 8K ProRes LT was fine and, quite frankly, the odd dropped frame here and there doesn’t stop you editing. The big real-world test for me was, could I edit 10-bit 50p 4K raw from my C200 natively, with no dropped frames and seamless changes in direction with the transport keys (I do like to rock back and forth on J and L when editing on the fly). The answer was a big fat YES. In fact, even if I deliberately whizzed my playhead back and forth as quickly as possible, it still skimmed through with ease, as if it were just some 8-bit compressed HD rubbish! ;)

Now, one of the things that I do think is worth measuring accurately, is export times. I wanted to quantify how much time someone could expect to save when exporting multiple deliverables, as this is something that has a direct impact on everyone’s working day. I timed how long it took to do two exports of a 5m 46s case study I was delivering, and then compared that to my top-spec 2017 15” MacBook Pro. I exported a ProRes 422 4K 25p master and an H.264 HD 25p deliverable and here are the results:

Just look at those numbers! People who buy the new iMac Pro might have to take up an extra hobby to fill up all their spare time!

My friend and fellow cinema5D writer, Tim Fok, asked me to do a head-to-head with his iMac 5K, as he was wondering if it was worth upgrading and wanted a direct comparison. So we both did a basic transcode with the same 51 second, 6K, .r3d file. We exported to HD Pro Res 4444, making sure all our settings were exactly the same in REDCINE-X PRO and here are our results:

I have several jobs booked in for February and March that need to be shot in raw and mastered in 4K, HDR. For me, the iMac Pro was designed for exactly these types of workflow. The incredible display is clearly designed to showcase this type of content and the horsepower is more than enough to cut and grade this stuff natively and quickly. As long as you configure it with a spec that will see you through the next two to three years, you won’t care about the lack of upgradability. And if you think that building a PC with the same spec hardware is going to save you a fortune, think again too. Once you factor in that outstanding display, you really aren’t that far off and, besides, you can’t put a cost on that lovely, shiny, black Apple logo ;)

Are you considering spending big bucks on the new iMac Pro? Let us know in the comments!