From a journalist’s point of view, I have always hoped for the opportunity to interview two particular respected people from our industry – individuals that, in my opinion, are responsible for making TV and filming equipment much more accessible and affordable at both ends of price spectrum. In reality, there is nothing really that connects them more than sharing a vision and passion to innovate. I’m talking about RED’s Jim Jannard and Blackmagic Design’s Grant Petty. While I’m yet to interview Jim, I had a chance to have a one-on-one open and honest talk with Grant Petty while attending Inter BEE 2017, the local broadcast industry exhibition that takes place in Japan. 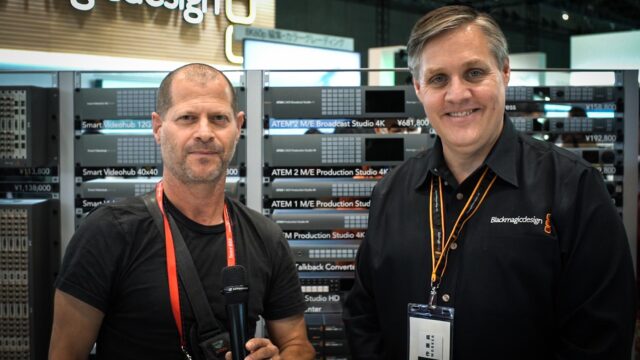 Grant – who is undoubtedly one of the people we can consider as having brought affordable working tools to production companies and individuals – was kind enough to openly share with me some of his views regarding our filming and TV industry. We had a chance to talk about topics such as what made him start a company that strives to produce affordable equipment including cameras, the reason behind Blackmagic Design ceasing to announce new cameras before bringing them to the market, and lastly, if there is anything we should expect to see from them in the near future.

For those of you who do not have the time to watch the discussion and are still asking yourselves, “How come Blackmagic Design is not able to supply a camera in time?”, here is a spoiler alert: it only takes ONE part to be delivered late at the factory to cause delays across the entire production chain of such an electronically complicated camera, making it impossible for the manufacturer to deliver it in time.

I truly hope that opening a small window into the manufacturers’ world can serve to cultivate an open conversation to better understand the process of the people behind the brand name, as well as communicate the needs, wishes and thoughts of users like us.