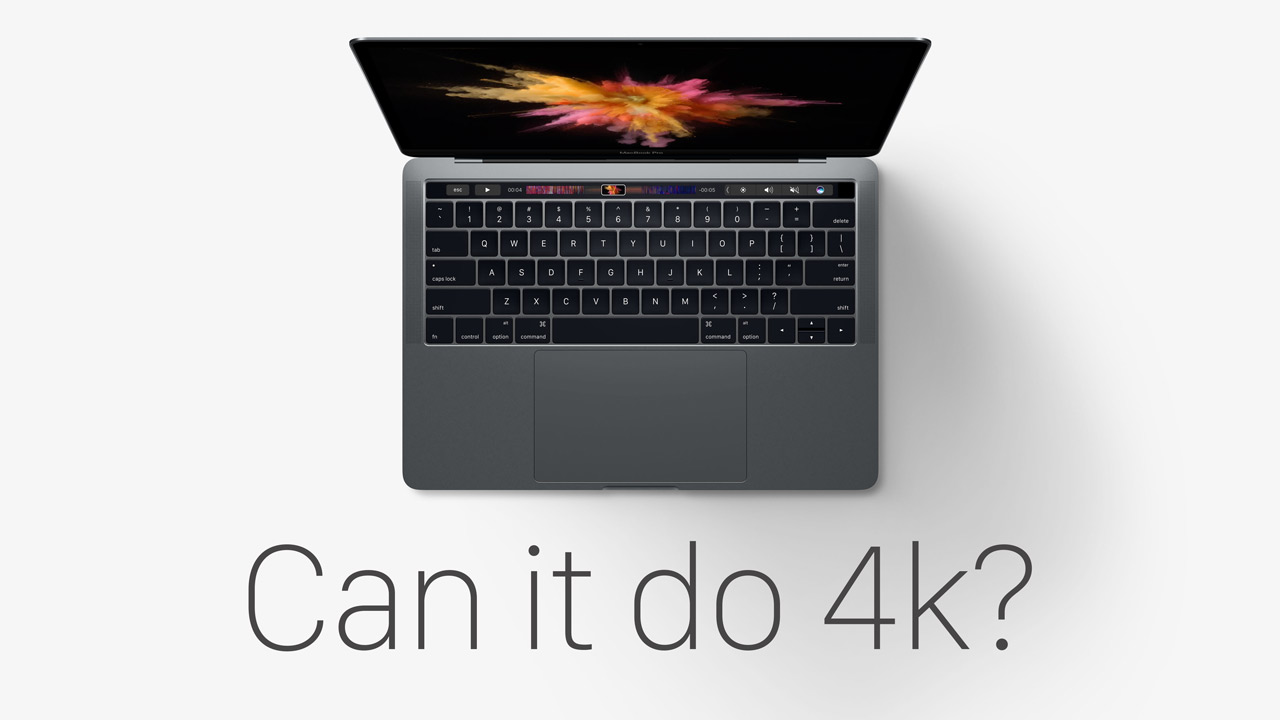 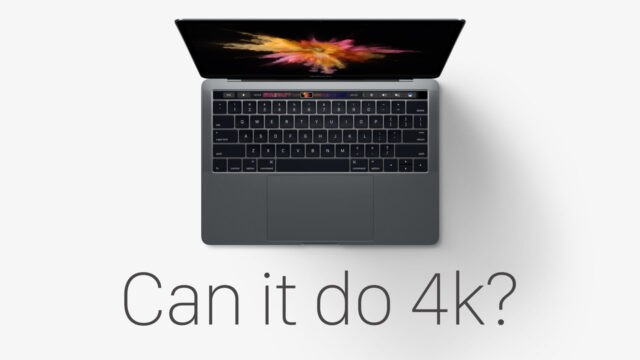 As you probably know, Apple recently unveiled an entirely new line of Macbook Pros that introduced several changes to their design and functionality. Many professional users voiced concerns about the removal of ports, among other things. The high price and low specs on paper have also earned criticism in many articles and forums. But even for those who choose to overlook such shortcomings, one question remains unanswered: is the MacBook Pro 2016 fast enough in real life for 4K video editing?

Reviews for the Macbook Pro 2016 without the touch bar have been flooding the internet for the last two weeks, and we know for a fact that it isn’t fast enough to cope with a real life 4K workflow. But the new touch bar 13-inch and 15-inch models only arrived at customers’s doors today. A few reviews and the first benchmarks have been published, and the results are rather surprising in both directions.

While we do not have a Macbook Pro 2016 model for review at cinema5D just yet, we were very curious to see what other professionals are writing so far, and what the first benchmarks tests are revealing. This way, we can start to make out if the upgrade to a Macbook Pro 2016 is worth it for 4K video editing.

We all know that 4K editing performance is to a large degree dictated by a the speed of your machine. In other words, we need good specs and performance. The entry level Macbook Pro 2016 13-inch has a 2Ghz i5 processor, which sounds rather underwhelming considering my 2011 Macbook Pro had a 2.4ghz i5 processor. Is it slower than that? No, in reality it’s not that simple. When you look at benchmark scores you quickly see that even the entry-level, non touch bar 2016 model has some more power under the hood than expected.

Macworld has taken a closer look at the specs of all new Macbook Pro models in their Macbook Pro 2016 review.

These are Macworld’s multicore CPU results of the new Macbook Pro 2016. As you can see, the entry-level 2Ghz Macbook Pro 2016 13-inch model is slightly faster than last year’s 2015 retina Macbook Pro model with 2.7Ghz. What?

On the other hand, if you expect the 2016 13-inch model with touch bar and 2.9Ghz CPU to score much higher, you’d be mistaken again, as the 2.9Ghz version is only 3.8% faster than the non-touchbar version. So even though the touch bar CPU has 30% more Ghz, it is only 4% faster.

Although I’m confused by these results, they are also revealing, and looking at benchmarks before making a purchase decision seems like a very good idea. This tells me the non touch bar version and the touch bar version have a very similar speed. And if the touch bar is the only deciding factor between the two, then many people will probably decide to live without it.

As expected, the 15-inch model scores much higher in terms of CPU performance, and just like last year’s model, it runs in a completely different class. Its CPU multicore score is about 41% higher than the 13-inch models, but surprisingly it is weaker than the 2015 model…

These results are in line with Engadget’s findings on their review, so they seem to be accurate.

Graphics performance is another revealing aspect about 4K editing performance. I’m relieved that at least in this aspect the 2016 machines outperform the 2015 models of Macbook Pros. We can see the 15-inch Macbook Pro 2016 features very high speeds in comparison to all other models. Also, the 13-inch models are faster than the old Macbook Pros, but again the touch bar version seems only slightly better than the non touch bar version of the Macbook pro 2016.

Apple claims disk speed on their new Macbook Pro’s is insanely fast. As it turns out, this was no exaggeration. 9to5mac tested drive performance of the entry level 13-inch model and sees read speeds of up to 3GB/s and write speeds up to 2GB/s, which they say is basically the fastest drive read and write speeds of any stock computer available today. That is great, but unfortunately disk speed is only one of many important factors when it comes to a machine capable of editing 4K video. 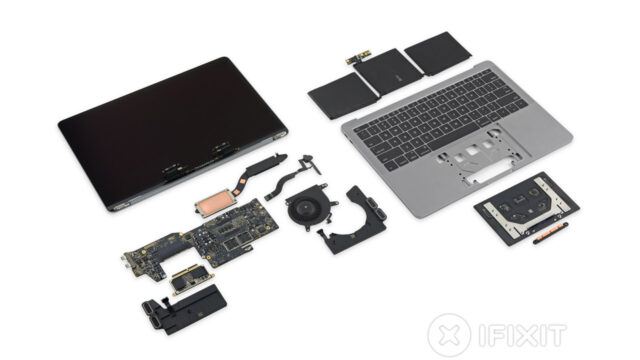 According to another source (arstechnica.com) there are some other technical differences between the touch bar and non touch bar models that are worth pointing out:

Aside from the CPU and GPU clock speed differences, the touch bar model’s 28W CPU can run faster for longer and throttles less frequently in comparison to the non touch bar 15W CPU.

The non touch bar 2016 Macbook Pro only has two Thunderbolt 3 ports vs the four on the touch bar model. But according to arstechnica.com:

The two ports on the right side of the MacBook Pro have “reduced PCI Express bandwidth,” which Apple says means they have two PCIe 3.0 lanes worth of bandwidth at their disposal instead of the four lanes dedicated to the ports on the left side

This seems to be worse when connecting high-performance storage arrays like 4K editors usually do, so you should connect those only to the left-side ports.

In terms of RAM, unfortunately all Macbook Pro 2016 models max out at 16GB. 32 would be better and recommended for 4K video editing. There is one more difference though: it seems like the non touch bar Macbook Pro uses 1866MHz LPDDR3 RAM while the touch bar version uses 2133MHz LPDDR3, making the RAM faster. Again, faster RAM unfortunately does not make up for the 16GB limit. In reality, the RAM speed should only have a minor impact on editing performance.

4K in the Real World?

So, how do these facts translate to real world 4K video editing? In their review of the 13-inch touch bar Macbook Pro 2016, the Verge offers some insights. They say that the 13 inch is snappy and “without hiccups” in day-to-day use, 1080p video editing in Adobe Premiere is no problem, but apparently 4K video “becomes unworkable”. In their tests, however, the 13-inch MacBook Pro could handle small 4K files smoothly in Final Cut X.

The 13-inch MacBook Pro can handle small 4K files smoothly in Final Cut Pro, but that isn’t the app that most editors use. It’s not a win where it counts.

In their review, it was a different story with the 15-inch model. According to the Verge, it is a step up from older 15-inch Macbook Pros and it was capable of handling smaller 4K projects in Premiere and Final Cut. But on larger project files “the computer starts lagging pretty seriously” and the performance was better on the 2013 iMac. Wow.

As far as I can tell, this is probably due to the 16GB RAM limit on the Macbook Pro 2016. In terms of speed, at least the 15-inch Macbook Pro 2016 seems to be ready to perform basic 4K video editing tasks, but as soon as you’re working on a bigger project, unfortunately none of the 2016 Macbook Pros seem to be ideal.

But there are positive voices too. Thomas Grove Carter is a professional editor at Trim who had a chance to spend a week with a 15-inch Macbook Pro 2016. In his article at Huffington Post Tech, Thomas shares his experience working on Final Cut X as “buttery smooth” and says:

the software and hardware are so well integrated it tears strips off “superior spec’d” Windows counterparts in the real world.

Thomas would consider the 15-inch Macbook Pro 2016 his 24/7 edit suite for both office work with 2 connected 5K displays as well as work in the field. He also equipped his setup with USB-C SSD’s, eliminating the need for additional dongles.

Thomas enjoys the touch bar on Final Cut X and seems to suggest that people need to adapt to the design decisions Apple laid out with the new Macbook Pros. If they do, then there’s a lot of power and potential to be harnessed from these machines. In his words:

For me, I love it and I think most people will do too… once they actually touch it.

There are more reviewers saying good things about the new Macbook Pros, but few of them are using the laptops with a 4K editing workflow in mind. As machines for day-to-day office tasks, photo and 1080p video, they probably perform remarkably well, and the build quality and simplicity is beautiful and enjoyable.

I’m trying really hard to love the new Macbook Pros and probably many professionals find themselves in the same position. Even if we don’t like to admit it, Apple has cleverly bound users to their eco system and has been making them adapt to and rely on their systems for a while. With the need for higher resolutions like 4K, more color depth and ever-more complex processes during a 4K workflow, the need for higher performance machines has risen in recent last years also.

So is the new Macbook Pro 2016 fast enough for 4K Video Editing? Unfortunately, it seems like the power of the new 2016 Macbook Pros is not up to speed with this development. Instead, Apple focused on consumer interests, like port simplicity, a more immersive display and sound experience, thinness and lightness. Regardless of whether that touch bar turns out to be a great asset or just a gimmick, the fact of the matter is: we are left with a machine that is too weak to cope with current professional editing trends and standards, and lacks the ergonomics professionals depend upon, like long battery life, versatile ports and the still much-needed SD card slot.

Apple has always had a very narrow set of options that users have had to embrace and adapt to. They dictate the way users should be getting their work done, but this time the changes and decisions seem too drastic and probably many professionals will be left behind. If it is really true that you can only edit 4K video on a maxed out 15 inch Macbook Pro 2016 with Apple’s proprietary software, that will be certainly be considered by many not to be professional enough, and we’re going to have a problem.

What is your conclusion? Tell us why you think the Macbook Pro 2016 is great / not so great in the comments below.