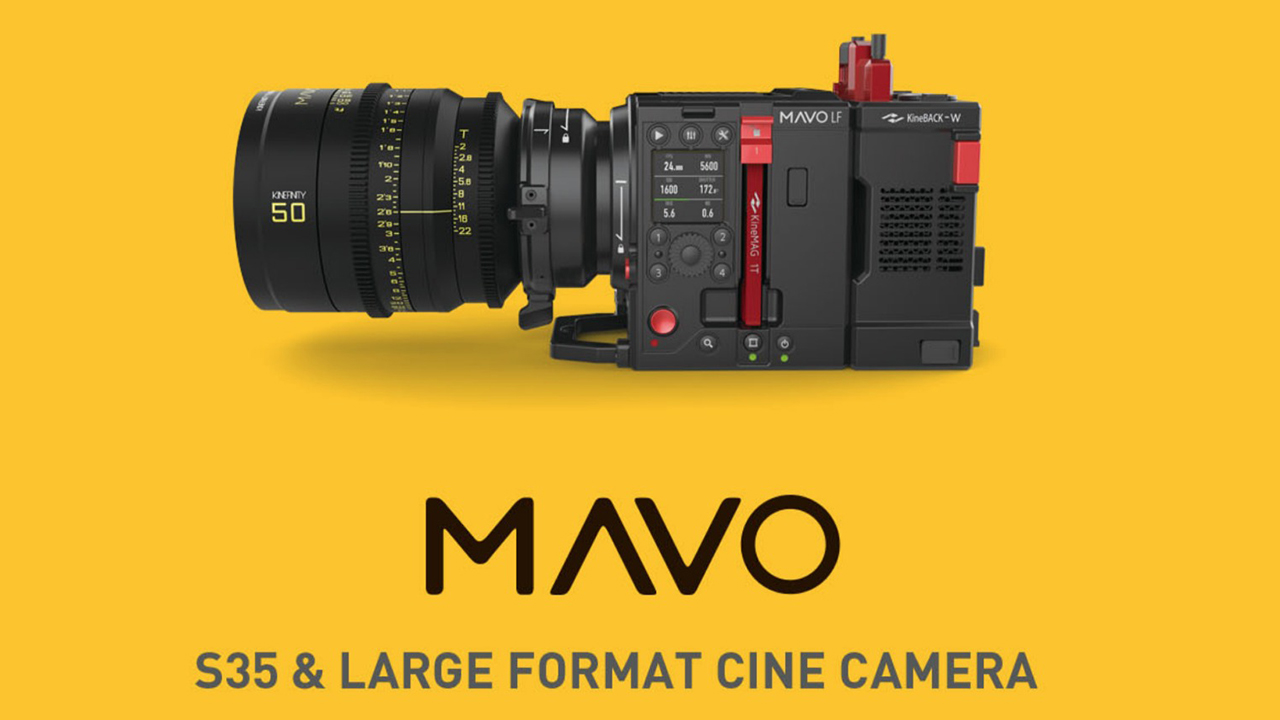 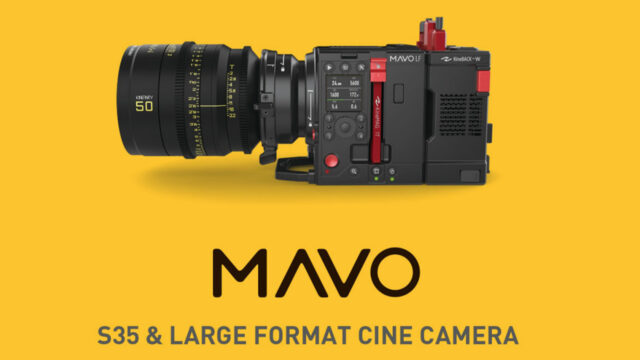 The new Kinefinity MAVO is a 6K-capable Super 35mm cinema camera building upon the legacy of the company’s previous line, the Kinefinity Terra. Although the MAVO offers plenty of professional features, its price of “only” $14,000 for a complete camera package with all accessories is still massively disruptive – a strategy that Kinefinity is clearly intent on keeping up.

The Kinefinity MAVO is a modular system similar to what the manufacturer did with the Terra line. The camera body includes the brand new 6K CMOS Super 35mm sensor, along with basic I/O, headphone output, 2.5” SSD port, built-in mic and the port to attach the SideGrip – a side handle offering basic controls and battery compartment – and the KineMON – the camera’s proprietary monitor.

Like the Terra, the Kinefinity MAVO becomes a much more powerful beast when attaching the optional KineBACK module at the rear of the camera body, which unlocks more professional features such as dual XLR inputs with phantom power, SDI outputs, V-Lock battery capabilites, D-tap power outputs, and timecode in/out. The new version – the KineBACK-W – seems a lot easier to attach, requiring only a couple of screws rather than fumbling around with a delicate ribbon cable, as was the case with the Terra. This means it is a lot quicker to go from a fully built-up camera to the compact 990g body-only, perfect for mounting on a gimbal.

This new version of the KineBACK, however, offers new integration for wireless functionality. It features a slot into which you can insert a new wireless transmitter card, unlocking a system capable of wireless video transmission with a claimed zero delay, as well as wireless lens control via the Movcam system, all this without additional cables or powering.

The Kinefinity MAVO still makes use of the Kinefinity KineMOUNT system, a versatile mount that allows you not only to easily change between Sony, Canon, Nikon and PL mounts, but also takes the manufacturer’s proprietary EF or PL variable ND filter attachment and KineENHANCER (Kinefinity’s version of a Speedbooster).

Additionally, the Kinefinity MAVO will feature a removable OLPF. This is significant, as the Kinefinity TERRA 4K – the company’s current entry-level option, which also offers very interesting features at a very low price – suffered from severe OLPF reflection flare issues when pointed directly at strong sources of light. This has been a cause of concern for many potential buyers doing their due diligence, so having the possibility to remove the OLPF altogether, or easily replacing it when new and improved versions become available, could be a good compromise.

Kinefinity’s new camera offers a Super 35mm sensor, larger than the Terra 4K sensor which was halfway between Super 35mm and Micro Four-Thirds. This new 6016×4016 pixel sensor offers over 14 stops of dynamic range, and various maximum frame rate, resolution and sensor windowing combinations including Open Gate and 4:3 for anamorphic capture, as you can see in the graphic below. Despite the larger sensor, Kinefinity claims improved rolling shutter speeds, putting it in the same ball park as the RED 8K-capable cameras. 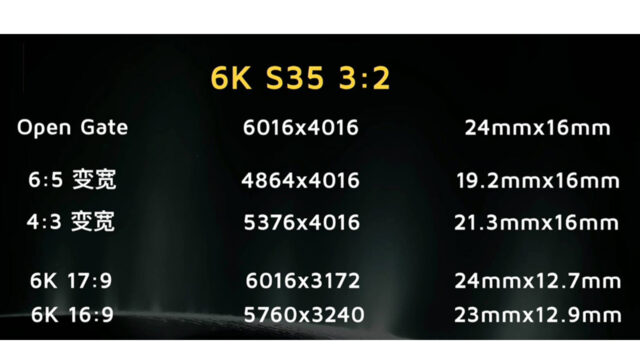 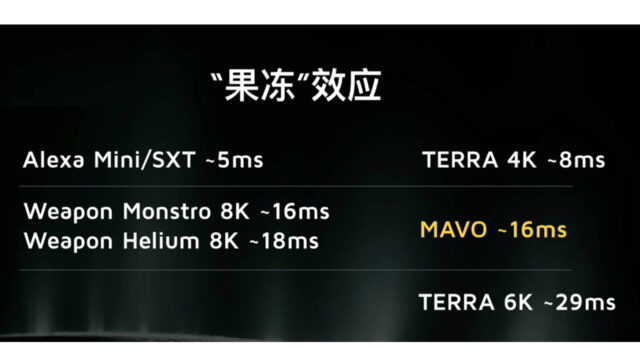 In terms of processing, the Kinefinity MAVO also has some great improvements, with the addition of ProRes 422HQ, ProRes 444, ProRes 444XQ codecs to the previously available ProRes 422. Kinefinity’s own flavour of Raw has been updated to KRW 2.0, and now allows for an adjustable compression ratio from 2:1 to 10:1. Kinefinity previously offered a free software utility to transcode KRW to cinemaDNG, so what is even bigger news is that MAVO can record cinemaDNG internally at 3:1, 5:1 and 7:1 compression ratios.

Kinefinity MAVO will be available in four packages:

If the Terra pricing scheme is anything to go by, the Basic package will also include accessories such as the KineMON, SideGrip, a couple of BP-U 30 style batteries, charger, KineMAG SSD and power cables. The Pro package will also include the KineBACK module, case and shoulder rig kit. I would guess the Full package includes all the necessary accessories to unlock the wireless capabilities of the camera. There will also be trade-in deals for owners of earlier Kinefinity cameras.

We are still awaiting information regarding worldwide shipping dates, so stay tuned!

In the age of Sony VENICE, RED Monstro and ARRI ALEXA LF, it is clear that there is a tendency towards large sensors at the very top tier of cinema cameras. Clearly, Kinefinity didn’t want to lag behind.

During the live stream today, Kinefinity also announced an upcoming large-format cinema camera, the MAVO LF, which will pack a 36x24mm sensor, just a wee bit smaller than the ALEXA LF. This camera – which will no doubt become Kinefinity’s flagship after the now ageing KineMAX – will benefit from all the improvements of the upcoming Kinefinity MAVO, and will become available in August 2018. 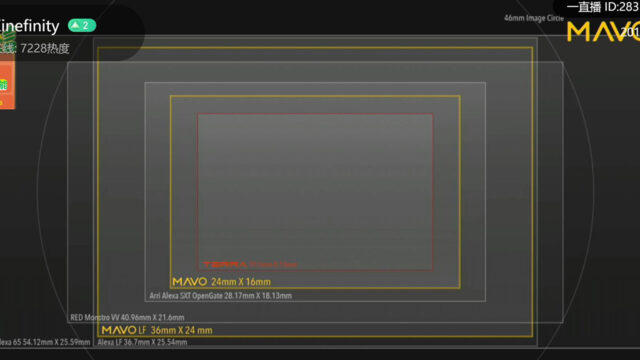 For more information about the MAVO camera line, head over to www.kinefinity.com/mavo.

As if the announcement of two new cameras wasn’t enough, Kinefinity also announced a complete range of cinema lenses for the MAVO platform. The MAVO Prime lenses will cover 25, 35, 50, 75 and 135mm at T2 with full-frame coverage, and a price tag of around $12,000 for the whole set. 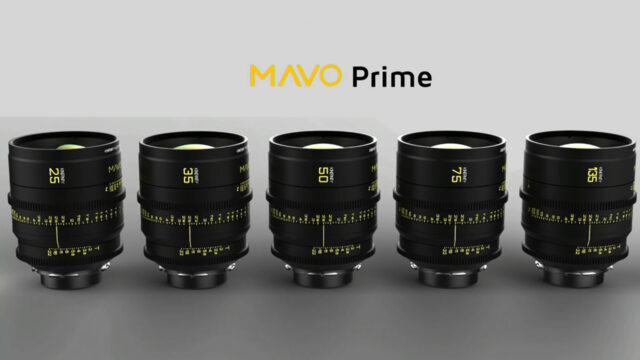 So there you have it: a news announcement to shake up your Sunday. Also, NAB 2018 is just around the corner, so we look forward to seeing if Kinefinity will have a working MAVO to check out.

NOTE: It seems that the updated Kinefinity operating system will also become available for Terra cameras. Bear in mind that not all functions will become available, likely due to hardware limitations.

Have you shot on a Kinefinity camera before? Could the MAVO finally be this manufacturer’s breakthrough into the big leagues in the cinema camera market? Let us know your thoughts in the comments below!