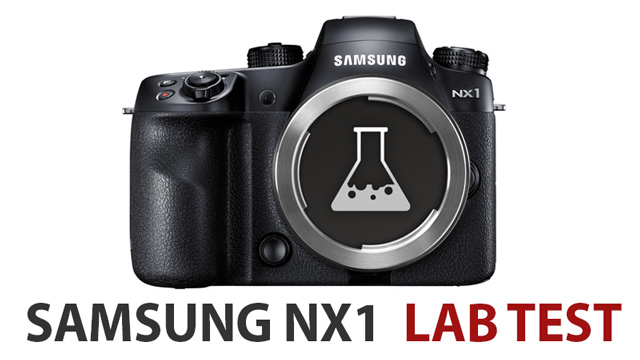 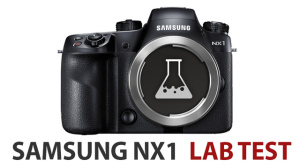 The Samsung NX1 is Samsung’s first photo camera to with video shooting functionality. It was announced in September and brings interesting video features like a 4K mode and is also the first camera to feature new H.265 compression that promises to offer more quality at smaller file sizes.

Disclaimer:
This review is based on the first  Samsung NX1 release firmware introduced in 2014. Since then new firmware updates have significantly improved the camera. This review does not reflect the current state of the camera and it will not be amended until we get a chance to re-test.

Personal words:
First off I want to say that having reviewed many cameras there’s an element of surprise seeing several positive reviews about the Samsung NX1 video mode. In my observation Samsung tried something bold with the NX1, and they should get credit for that, but they couldn’t quite achieve something that I would call usable. There are some major issues with this camera and I would not recommend it for video shooting (yet).

The photo functionality of this camera was not tested.

Like many other cameras before we ran the Samsung NX1 through our test lab and will give you some insights on sensor performance, dynamic range, sharpness, rolling shutter and usability in comparison to the Panasonic GH4.

Camera Settings
Unlike all our other lab tests this Samsung NX1 was equipped with the Samsung 16-50mm F/2-2.8 OIS Lens and shot at 50mm. (We could not get the necessary mount adapter for NX-M in time.)
The camera was set to custom picture profile: Sharpness -10, Contrast -10
“Smart Range+” was enabled for maximum dynamic range.

We tested all ISO settings from 100 up to the camera’s limit of 25600. Interestingly this is the first camera we ever saw that has a consistent 10.1 stops without any shift in brightness throughout the whole range up until ISO 3200. This means there’s no “sweet spot” or native ISO that we would recommend to shoot at.

10.1 stops of dynamic range is not a good rating. Actually it is the worst rating of all lab tests we have published so far. However it comes in not far behind the Panasonic GH4’s 10.8 stops.

We’re certain the sensor is capable of more dynamic range, but the camera is very limited at this time with the baked in picture profiles and no log option.

Dynamic range from ISO 6400 degrades with noise in blacks. Awkwardly there is no actual shift in brightness at ISO 12800 while noise does get more severe. Same goes for ISO 25600. So there’s actually no point to dial in the higher ISO numbers as they have no effect other than degrading the picture.

Also as noise kicks in at the higher ISO’s it seems there is strong noise reduction used at the lower ISO’s. There is a lot more noise on the GH4 and the NX1 image is cleaner throughout, but the NX1 is only a little stronger in terms of lowlight overall.

In terms of rolling shutter the Samsung NX1 is so bad we had to change our test parameters. In UHD mode surprisingly rolling shutter is even a tad more severe than in the larger 4K mode. Probably a smaller portion of the sensor is used and upscaled to the 4K size in 4K mode.

With 29 milli seconds difference between top and bottom it is worse than both the Canon 1DC as well as the Sony A7S. The Panasonic GH4 performs a lot better in this test at UHD resolution. 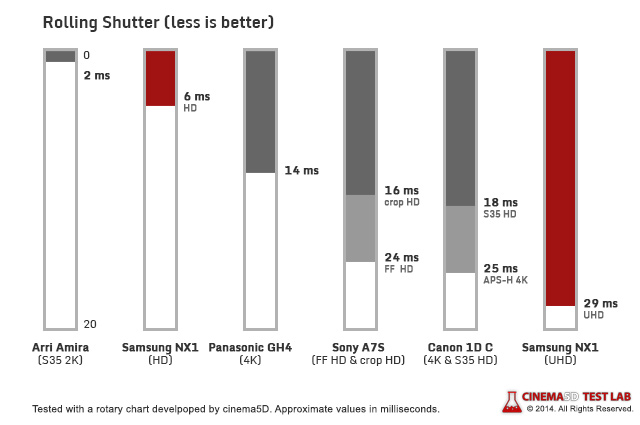 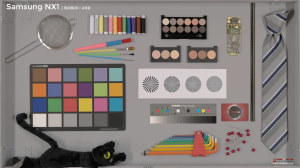 On the left you have a full screenshot of the Samsung NX filming our subjective test chart. Jpeg compression is low enough to retain/show the compression as it comes from the camera. Scroll down for some 1×1 crops. 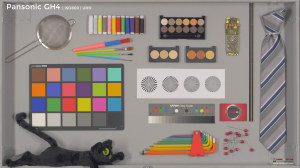 The first 1×1 crop shows the difference between UHD and 4K mode. Actually 4K has more resolution than UHD, but the image looks a lot softer there. So save the storage and never use 4K mode. Instead UHD offers the nicest picture the NX1 can deliver and yes, it is a very nice and sharp image. Nicer than the image coming from the GH4 and also slightly sharper. I wish the camera was more usable and had H.264 compression instead. 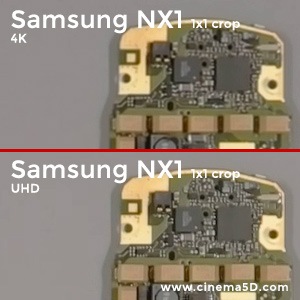 On the 1×1 crop with the red needles we compare the Samsung NX1, Panasonic GH4 and Sony A7S in HD mode.
Clearly the Samsung NX is totally unusable in HD. While we aren’t fond of the Panasonic GH4’s HD mode, what the Samsung NX1 offers is worse than anything I’ve seen on a camera of this kind. The image is extremely soft and washed out. Details disappear in a mist of aliasing, compression, noise reduction and softness. 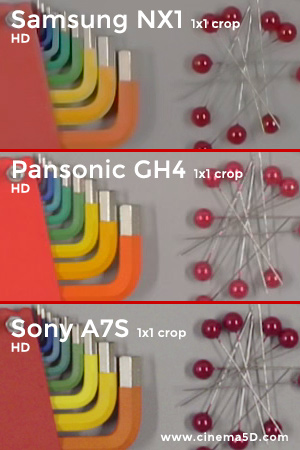 While the GH4’s colors and brightness are off and it has some aliasing, it comes a lot closer to a usable image than the Samsung NX1 ever will. Samsung should improve the features they implement.

H.265 is a big problem on this camera. At the moment H.265 support is very limited.
In order to get your H.265 files from the camera into your editing software you need to convert them with the tool by Samsung. The tool can be installed by connecting the camera to the computer via USB.
The installation feels a lot like spyware as it collects tracking information and has a user interface from the 90’s. It is unintuitive to use and converts 1 hour worth of UHD footage in 18 hours (on an iMac 27″ late 2012 model).

[Update]: As requested we tried a third party H.265 conversion software. Wondershare offers a video converter that can batch convert H.265 files to ProRes. This tool is about 4 times quicker giving us 1 hour worth of footage after about 4 hours of conversion.
When compared to the Samsung tool we found that UHD file quality is fine with no visible difference to the Samsung converted files, but in HD mode quality is actually worse with more compression artifacts in Wondershare. The Wondershare software costs $50. There will be other conversion software to support H.265 soon.

Unfortunately this is not all. Trying to shoot 120p which the camera offers in HD results in Samsung’s own conversion software to report “unsupported format”. [Wondershare also transcodes 120p files. These however look as unflattering as normal HD mode]

It’s frustrating and time consuming to work with this camera’s footage. Codec quality is good, but there’s something strange in that there is no noise at all. The image looks denoised and slightly unnatural. 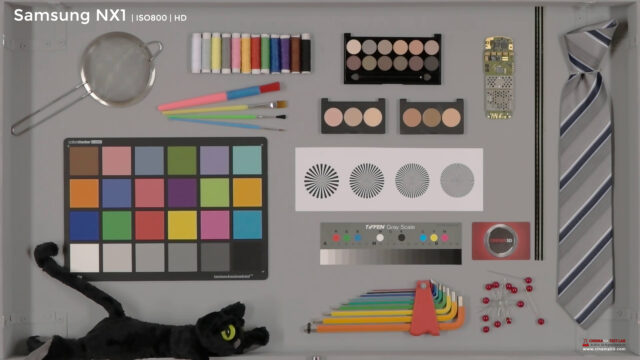 The camera itself feels very well built. The user interface is intuitive, very responsive and feels more organic than on any other camera I have used. This is a big plus. Unfortunately in movie mode some essential functionality is missing (see below) and it seems Samsung got it all wrong here which could be due to the lacking experience as this was their first large sensor photo camera with video functionality.

One general thing we’re missing is a battery charger. The camera battery has to be charged via the camera’s USB connection.

Problems in movie mode:
• Actually there is no dedicated movie mode and no video button, but only “movie preview mode” which you can set to a custom key.
• In “movie preview mode” no focus check is possible. So you either have to rely on the small screen or switch back to photo mode.
• In “movie preview mode” there’s no histogram.
• Also the histogram in photo mode is less accurate than on other cameras making it quite useless to work with and spot over or underexposure.
• Lens Focus resets to infinity on camera restart or card eject. This is highly annoying.
• The EVF has heavy ghosting. It seems to be of poor quality and is not recommended for video.

As mentioned at the beginning it seems Samsung tried to create something bold with h.265 in the NX1 and a nice video image in high resolution, but the implementation didn’t quite work. The camera cripples itself in so many ways it becomes almost useless. It almost seems easier to shoot RAW on a 5D mark III than to shoot normal video on the Samsung NX1.

I’m sorry this review is not very flattering. Samsung tried, but I think they will have to try again. It’s a mystery why other reviews on the video side are actually quite positive. Here’s a summary of the test results:

Con’s
– Very low dynamic range, no log profile. Panasonic GH4 performs better.
– Very bad rolling shutter performance. Panasonic GH4 performs a lot better.
– No lowlight strength. GH4 is worse though.
– Noise reduction and washed out details in picture. GH4 retains more detail.
– HD mode is unusable. GH4 is HD is not great but usable.
– 4K mode is unnecessary as UHD is sharper.
– File handling of H.265 is (less with third party software) time consuming . GH4 performs better.
– Samsung’s software doesn’t recognise their own file format at 120p.
– Movie Mode is not working well and a hassle to use.
– EVF has ghosting.
– Charger not included. Camera battery has to be charged via camera’s USB connection.
– Not easy to get good lens adapters at this time. Proprietary Samsung lenses are not ideal for video.

The Samsung NX1 offers an impressively beautiful UHD image. If this kind of image is all you’re after and you’re willing to live with the limitations, then this camera could do something for you. It’s just very hard to get there.

The Samsung NX1 is not recommended for most video shooters. For an affordable solution to get 4K video I would prefer the Panasonic GH4 at this time.