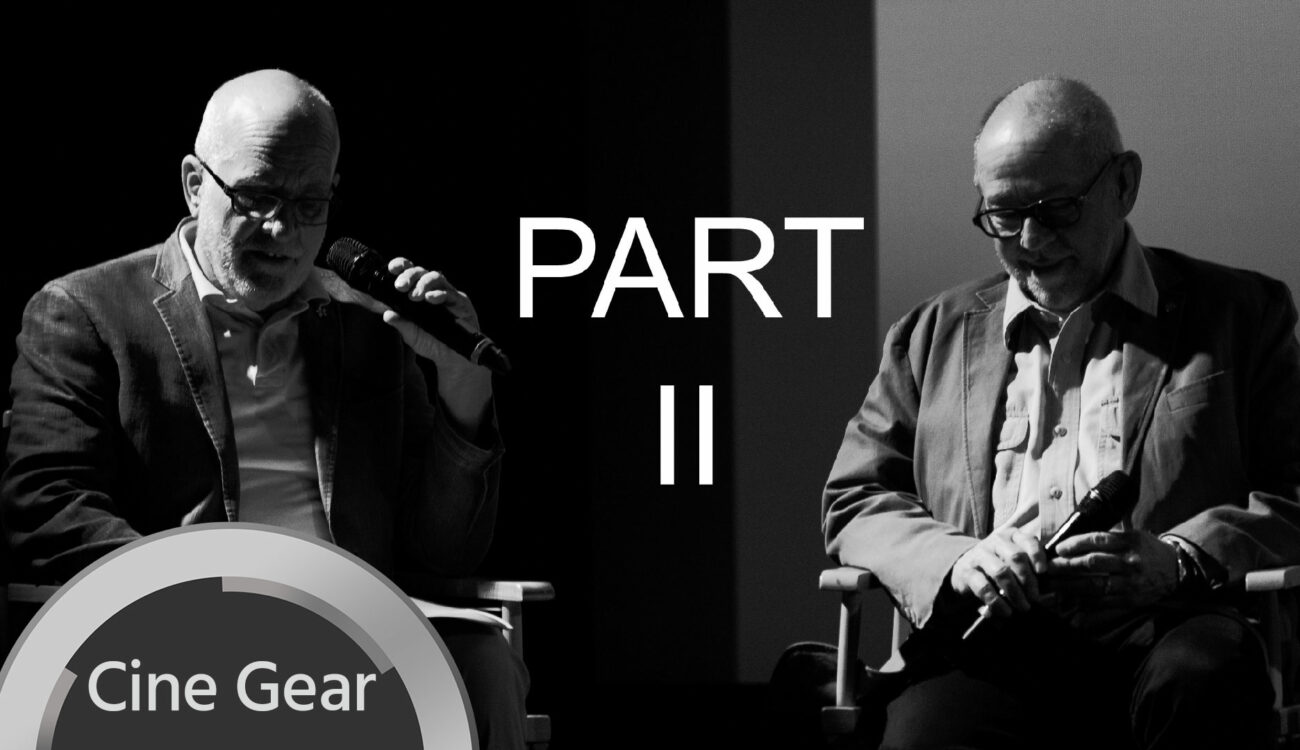 Read on to catch a gem or two of inspiration from Part 2 on our coverage of the CineGear panel: Landing the Gig and Building a Career! In case you missed part 1, click here! 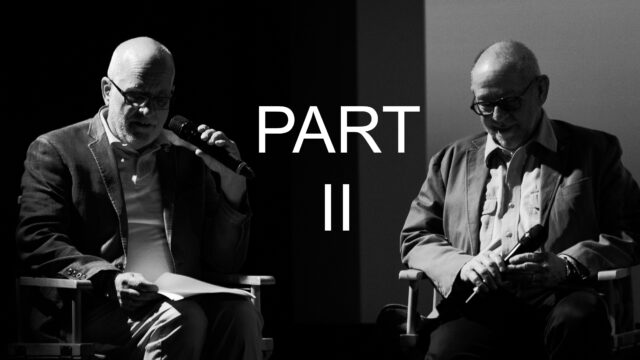 Sponsored by Local 600 and moderated by Michael Chambliss of ICG, this panel covered how to cope with the many stressors of being a freelance filmmaking professional as well as how to set goals, stay motivated, and chase after that pie in the sky. Choose your own adventure, but if you’re more of a sequential person and missed part 1, click here. Now onto part 2 of 2!

David Hirschmann
“Sales and marketing…no one wants to do it, but it’s a big part of your job…People are first and foremost gonna hire who they know.” Hirschmann is not all aboard the insta-wagon. “Social media works, but it’s still the outlier.” He believes  more in networking and maintaining relationships.

David made a really difficult transition from shooting sports to operating on narrative, a move that took him through ACing as well. Chambliss asked him to talk about how he knew it was time to move up and how he did it. “Some of it is in your gut…you have to know on your own. For me, it was just a matter of putting it out there with people I (had worked with) that knew I bring my A game every day.” David acknowledges that apart from who you know, a good reel can also really help you move forward and up. Having the kind of work you want to be hired to do on your reel will help you get more of the same, so you have to put your best foot forward.

Steven Poster, ASC
You have to do your side of the work.  If you have an agent, think of them more as a “selling partner.”  They can make the phone calls, but you have to get out there and make the connections and produce the work that the two of you sell together.

Bill Dispoto
Dispoto echoed Mr. Poster in saying, “Don’t wait for the phone to ring. We share information, and we make the plan.”  Agents work on your behalf, but at the end of the day, you’re the one who has to deliver the goods! He also cautioned those hungry for representation to be okay with “waiting until they want you.” Focus on upping your game and your skillset.  “You may not be ready yet.”

How do you know if you’re ready to start pursuing representation? “You used to be able to show a student film and 2 spec spots and get an agent.” Now you have to have some business savvy, and take initiative. Dispoto said that more often than not, the proof is just in the work, but more than that goes into choosing whom he wants to represent.  “As an agent, I have to have chemistry with the person I represent.” At another seminar, where all of the panelists were agents, they all had different opinions on what should go into reels, but they unanimously echoed what Bill said here. The right representation for you will be drawn to your talent, and your personalities won’t clash .  Don’t try and force a relationship with a particular agent just because of who else is on his or her roster. If there’s not an ease in communication, both sides of the partnership will suffer.

Donté Lee
As one of the younger pros on the panel, Donté’s perspective regarding social media was the most favorable. His career really got a jump start because people saw what he was posting and reached out to him because they loved what they saw. He was being asked to attend meetings down the street in LA via DM, but he was still living in North Carolina. Regarding your reel, Lee encourages you to “make sure you reel is a concentration of your best stuff.”  He admittedly had “filler” content, so that his reel would be a certain length and people could see more of what he had done.  “Just make it shorter, and only show your best stuff.” 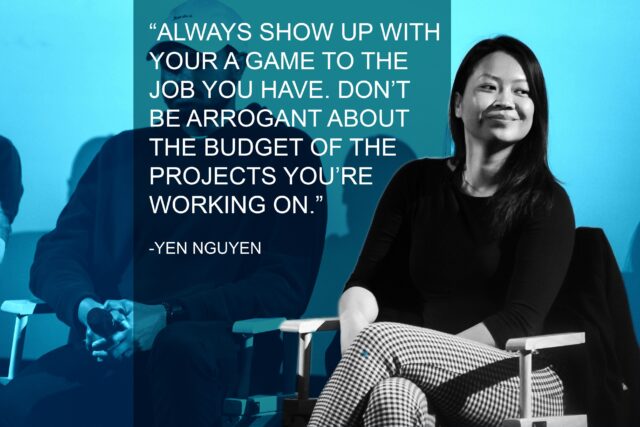 Yen Nguyen
Though Yen wasn’t specifically talking about marketing when she said this, it fits here. “I loved being a 2nd assistant…the pressure being off, but I knew it was time to move up. As a 2nd, your direct link to your work is your 1st, but when you’re a first, it can be your DP, or your operator, or even your director.” Yen was taking on more in her personal life, starting a family. There would be more opportunity for her as a 1st AC, and her goal was a full calendar. Nguyen’s advice to match her success is to leave your ego at home. “My bills don’t really care where the check comes from. Don’t be arrogant about the budget of what you’re working on.”

Yen told us about colleagues she knew who would prefer to have an empty week on their calendars than “step down” and do commercial work or even television. “Don’t lock yourself into any one thing, because people move.”  She meant both that people physically move–in her case part of her network moving out of town to Chicago and Atlanta–and that people figuratively move.  If you’re not a snob about the projects you take on, there is always the possibility that those same people hiring you for work with smaller budgets will eventually hire you for jobs on a bigger scale anyway.

On Coping with Failure and Getting through the Lean Times

Steven Poster, ASC
“Everyone gets fired in this business, and if you haven’t been fired yet…it’s coming for you”. Steven went on to say that everyone he knows cycles through the same experience: mad at whomever fired you; mad at yourself; doubt about whether or not you’re any good, then becoming really depressed. (It’s pretty comforting to hear an ASC member say that.) The important thing is to get back up, get back out there, and if the firing was your fault to learn from it. “The only magic sauce is perseverance.”

Yen Nguyen
“Save as much money as possible. Buy used gear if you can. Borrow camera carts. Have enough security to not work for 6 months. I work with so many people who are broke, and I’m like how?!? You make a great rate; how are you broke? Maybe don’t buy Starbucks everyday.” She’s definitely not wrong! I’m sure we can all raise our hands to making less than prudent decisions where gear is concerned at one time or another.

Sheryl Main
Sheryl’s words on “monkey mind” hit really close to home for me.  She warned against going down the rabbit hole of self doubt. What freelancer hasn’t been there?  In a stretch of the panel, when the panelists were sharing some of their lowest points, Sheryl talked about a hurdle that many of us face:  being seen as only one of the many versions of ourselves we can be.

After representing Arnold Schwarzenegger for years, he stopped making movies for awhile, which left Sheryl short on work. She called people she knew around town in search of new gigs and got a lot of responses to the tune of, “But you always work with Arnold.” Main advised us all to know ourselves and what we’re capable. She advises we not view ourselves through the narrow lenses chosen by those who only know us  in one way. If you don’t have that firm belief in yourself, you will get derailed by the doubt instilled by others.

“It doesn’t always work out. You can work back to back movies for 2 years, and then not work for 6 months. You have to know people, and you have to know yourself. Don’t go down the rabbit hole when things don’t work out. Sometimes you make a ton of money; sometimes you are on unemployment.” 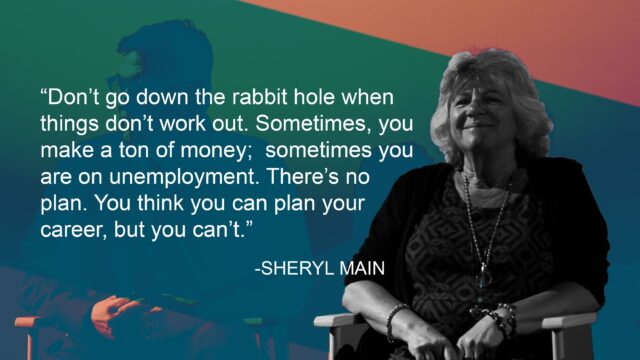 Bill Dispoto
“Don’t get lazy in your relationships. When there’s an opportunity to work with someone new, take it. Nurture the relationships you have, and then also make new ones so you won’t be screwed when that person moves on.” This can be tricky when you’re working often, because you might feel burnt out, or that you don’t have enough time to nurture relationships. Even watching other filmmakers’ content and shooting over a congratulatory text can make all the difference. Don’t let yourself become too distant of a memory.

After years of attending these sorts of panels, this was the first in a long time when it seemed all of the panelists were actually there to share their experiences and give encouraging advice, as opposed to using the seminar to inflate the individuals’ senses of status at the cost of the audience’s hope. One reason for this was that none of the panelists were  shy about sharing their failures, and I believe that’s something we should all really lean into. No one really enjoys or gains anything from the amount of time anyone else spends namedropping or puffing up their experiences.  However, when we share our shortcomings as well as our gains, instead of  wasting time trying to prove we’re worthy of the conversation we’re already in, we all grow together. Being freelance is not for everyone, but those who choose to walk that road know they’re going to need some pretty thick-soled shoes…and it helps to know we’re not walking it alone.

If you missed part one of the discussion, you can find it here.

So what’s helped you along the way?  What do you wish you had known sooner or are just glad you know now? And how are you handling the freelance highs and lows?  Comment Below!