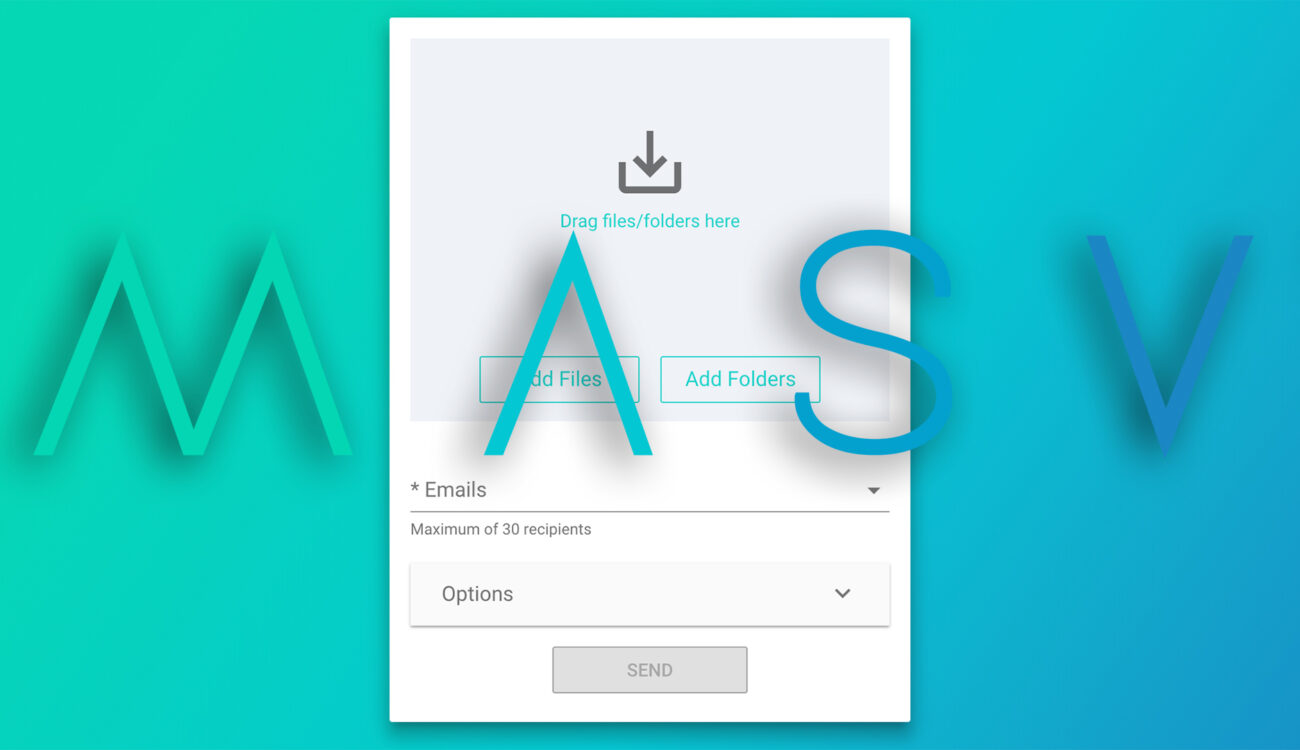 If you don’t know MASV yet, it’s really easy to explain: Use it to transfer huge files over the internet. Any amount of GB you like. You only pay for what’s actually transferred, there’s no subscription. MASV 3.0 now enhances the already solid feature set by quite a bit. 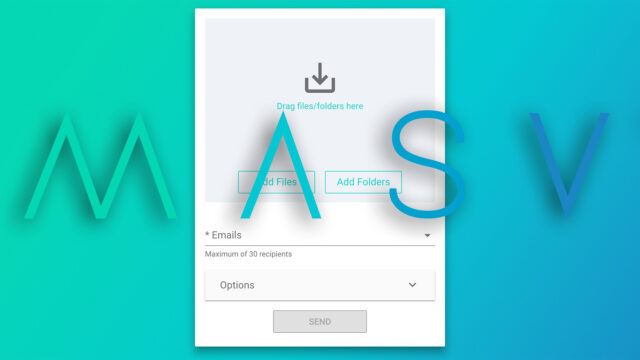 MASV has been around for two years now (read our coverage here and here). The service has entered the market to solve an everyday problem in post production: transferring huge files globally and in time. Shipping hard drives abroad can be quite expensive and is by no means on the safe side. With MASV you can send virtually any amount of GB and the cost is reasonably low. So what’s next? Well, MASV 3.0 is here and it brings a bunch of neat updates.

First and foremost, the whole underlying system is freshly built from scratch. This means improved performance and scalability for the future, but has a drawback that is somewhat annoying: You will need to create a new account, regardless of whether you already had an account for MASV 2.0 or not. David Horne, VP of Marketing at MASV on the matter:

The reason is that this is an entirely new system built from the ground up and there was just no possible way to migrate the existing database to the new platform.  If any users want help in the migration however we are happy to get your accounts set up the same as they were configured in MASV 2.0 after they create a new account.

On the backend, MASV 3.0 now sports 160 servers globally instead of the former 10 so uploading and especially downloading huge files should now be even faster. 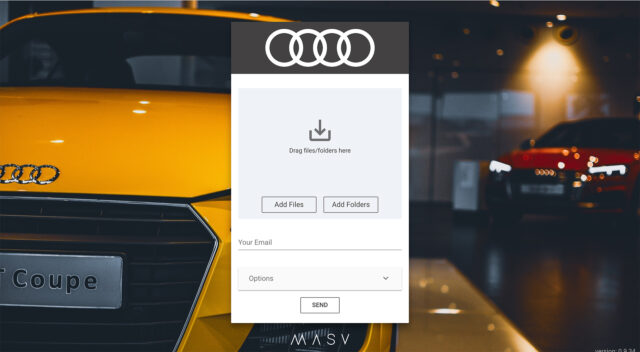 The UI has been reworked and you can custom brand MASV 3.0 to your liking. If you have created a so-called portal for your clients to send files your way, you can seamlessly integrate that portal page in your existing website design. Multiple teams can be created to separate billing and data access by different groups.

Another major change from MASV 2.0 to 3.0 is the new billing model: The old model is based around the following equation: GB uploaded x Number of recipients x $0.15 = billing amount. The new model is slightly different but it has a major impact: GB downloaded x $0.25 = billing amount. Sounds like a 66% increase in price? Not so fast. If I had used the MASV 2.0 (upload-based) model for transferring 10 GB worth of data to two recipients, I would have spend

But what if only one of the two recipients actually downloaded the files? Still $3.00. With MASV 3.0 that transfer would have cost me

Thanks to the increased server count the transfer is completed in less time and the whole framework is more robust. I think this is fair play, even if it means that some transfers get a bit more expensive. In the end ,this is far more convenient and affordable than sending hard drives around. David from MASV again:

The change in price and model is because we believe the value our service provides has increased since we started especially with a change from 10 servers to 160 servers globally and the change to download-based billing is to align our costs with how our cloud providers charge us. At these file sizes, additional downloads by recipients could make it so it actually costs us money on some transfers.  Some of our competitors subsidize this cost with ads or file size limits but we don’t think that aligns with the premium file large file transfer service we are trying to create.

So, MASV 3.0 increased the price per GB, yes, but they also made the billing process way more transparent. A newly implemented delivery tracking shows you exactly the amount of data each recipient has accessed.

Since the new model is based on downloading rather than uploading you now can restrict the amount of times each recipients can access the data. Password protection is also available, of course. Furthermore, MASV is GDPR compliant and uses state-of-the-art encryption for all transfers handled.

MASV 3.0 now works on your mobile device, too. You can send files straight from your phone by accessing the photo library for example. Accessing files sent to you via one of your portals is also possible (if you have enough storage on you phone..). You can check your package history and browse through previously sent and received transfers. The interface clearly indicates if your client has accessed a package and how data each client has downloaded so far. 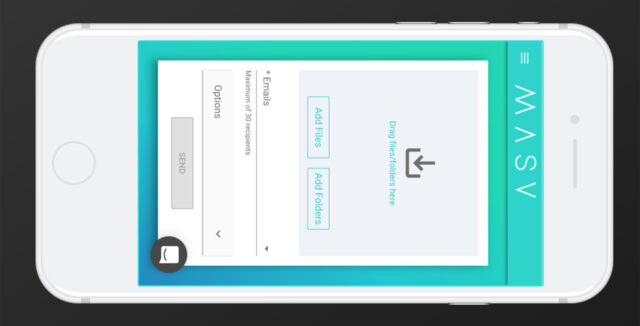 The mobile version (an app for iOS and Android will be released soon) also features all the benefits from the web browser version: Administrators can manage teams and user permissions, the UI is branded the same way the web browser version is. The freshly developed API (Application Programming Interface) on which MASV 3.0 is built will be made available for customers in the near future, too. 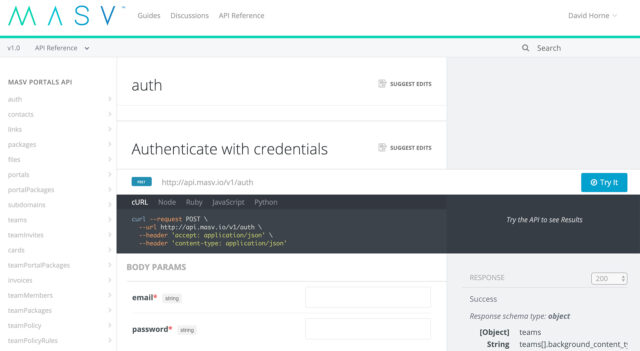 We are also working on a desktop app which should further improve the reliability when used for particularly long transfers. The main reason we moved and rebuilt the product was to build it on top of a robust API so that we can create integrations with key services faster like a mobile app, desktop app, and even into popular NLE’s.

A mobile app, a future desktop app, even integrations into NLEs. Sounds nice to me!

As stated before, MASV 3.0 is a pay-as-you-go service. No subscription necessary. If you don’t use MASV for a longer period of time, you don’t have to pay anything. For me, this is really nice since I don’t run a giant corporation and I don’t need to transfer huge files all the time. But from time to time I do need to transfer them and I’m happy to pay for this service. 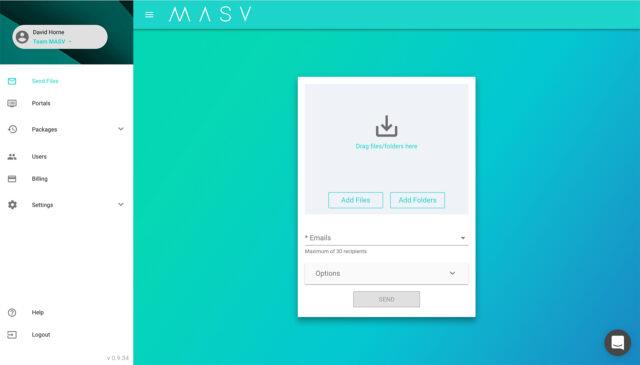 While testing the MASV 3.0 Beta version I encountered an upload error. The files simply didn’t get uploaded which was a bit annoying since I left the house after initiating the upload just to realize that it didn’t work out once I came home. On request, David from MASV contacted me, stating:

From looking into your logs my first assumption was correct and the bug you encountered has been fixed so you should never run into a failed upload again.  The root cause was just some differences between how Azure storage and Amazon storage works with our uploader logic. The new system is entirely based on Amazon so we had a few little issues with how we handled soft errors that have now been fixed.

With a nice customer support like that and a fast, reliable army of 160 servers, MASV 3.0 seems to be a worthy choice when it comes to transferring huge amounts of data around the globe.

The new MASV 3.0 is available now, you can check it out over at their website.

What do you think? Do you already use MASV or any other file transfer service? Share your thoughts in the comments below!