In this new episode of ON THE COUCH, recorded in Las Vegas at the B&H booth of NAB 2015, I interviewed Philip Bloom and Dale Backus from SmallHD.

We talked about the camera announcements from Blackmagic Design, e.g. the URSA Mini (which still aren’t shipping, by the way) and many other topics.

Our talk quickly shifted to on-set monitoring and color grading and consistency. SmallHD announced the 502 and 501 5″ field monitors with 1080p resolution and SDI/HDMI (502 version) as well as many custom LUT functions that allow you to apply looks to your logarithmic images from your cameras. 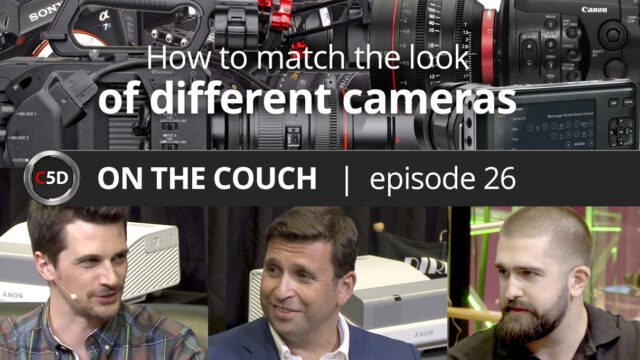 In this day and age where cameras are so ubiquitous that most of us end up using various different cameras at the same time and sometimes on the same shoot, color consistency and matching the look of these cameras become essential. But it is notoriously hard matching cameras from various manufacturers unless you invest a lot of time in color grading or having a colorist on the job.

Philip and I are using FilmConvert to match camera looks easily – the plugin (and standalone version) feature looks packs for specific camera models, which have been analyzed by the FilmConvert team to make the look settings for those camera models as precise as possible. So for example, when mixing C300 and F5 footage in one timeline, you can select the camera model in FilmConvert settings, the LOG version or picture profile you used while shooting, and then select the film stock you want to mimic with FilmConvert. If everything is exposed similarly and with the same Kelvin settings (however those can be adjusted afterwards too), the footage will immediately look the same as FilmConvert irons out each particular camera’s quirks.

Please visit our sponsors’ websites to keep new episodes of ON THE COUCH coming! Thanks to B&H, Røde Microphones & FilmConvert.