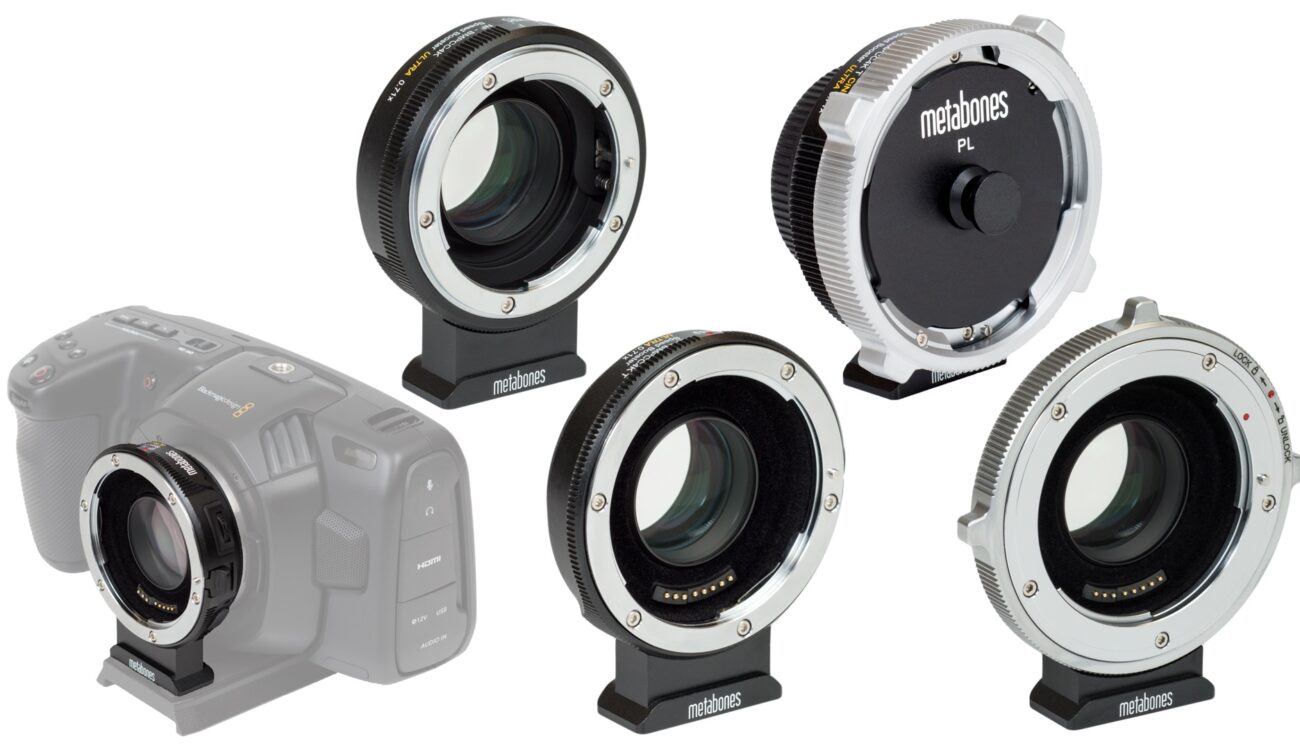 Metabones announced new series of Speed Booster adapters especially designed for Blackmagic Design Pocket Cinema Camera 4k (BMPCC4K). The redesigned optics provide better sharpness when shooting with low aperture numbers. They come in standard versions – ULTRA 0.71x and XL 0.64x, and for Canon EF mount, Nikon G mount, and ARRI PL Mount. The adapters can only be used with the BMPCC 4K, they cannot be mounted on any other M43 camera. 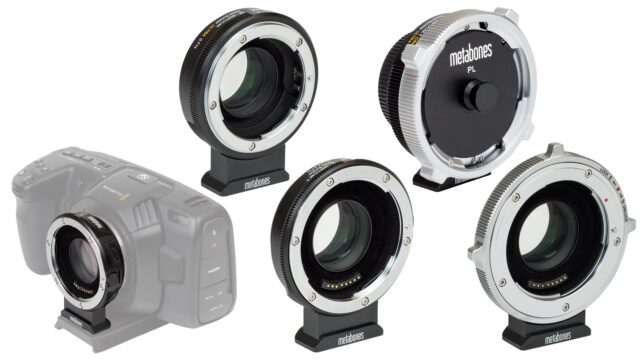 Although there are now many lens adapter manufacturers, when it comes to Speed Boosters – adapters with optical elements – Metabones is still providing unmatched image quality. They offer a wide range of adapters for various lens mount and large number of SLR lenses. One of those adapters are Speed Boosters for micro four thirds cameras. These Speed Boosters can be used with the Blackmagic Pocket Cinema Camera 4K, but the image can sometimes get soft when shooting with low aperture numbers. That’s why Metabones releases new series of Speed Booster adapters especially designed for the BMPCC 4K.

The new series of Metabones Speed Booster is especially designed for Blackmagic Design Pocket Cinema Camera 4k (BMPCC4K). The optics were designed by Caldwell Photographic. The adapters come in standard versions – ULTRA 0.71x and XL 0.64x. Both versions are similar to the standard Micro four thirds Speed Booster adapters, but the optics have been re-designed to optimize for the filter stack thickness of the Blackmagic cameras, which is substantially thinner than that of standard M43 cameras.

I will not dive too deep into the filter stack thickness topic here. If you want to know more about it, there is a useful article on Lens Rentals blog about it. The thickness of the camera’s filter stack is an important component of the overall optical design, and the re-designed optics ensure that the new Speed Boosters can achieve the same high performance with the BMPCC 4K as the Speed Booster versions for standard M43 do with other M43 cameras. As I mentioned, this is especially critical at wide apertures (fully open).

In addition to the new optical designs, the new series of Speed Boosters also features a longer tripod mount to match the height of the BMPCC4K camera body. This way the camera and the Speed Booster can be mounted firmly on the same quick release plate. 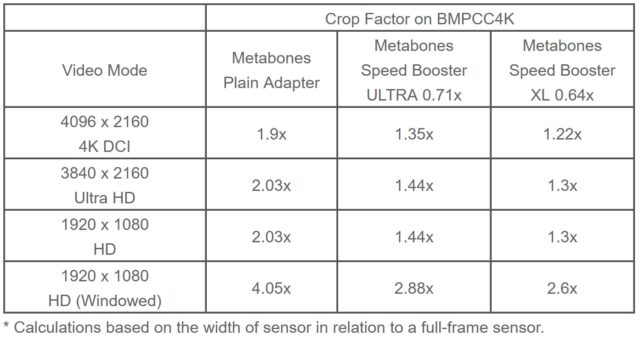 The new Speed Booster ULTRA 0.71x for BMPCC4K uses 6-element 4-group optical design incorporating ultra-high index tantalum-based optical glass. According to Metabones, optical performance of the new Speed Boosters will even improve MTF of any lens attached to it. Here are the MTF charts with commentary taken directly from Metabones website. 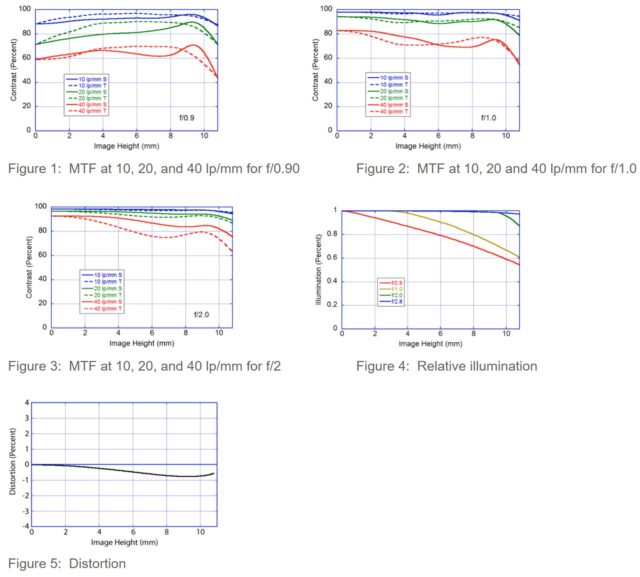 All of the charts show the optical performance of the Speed Booster ULTRA 0.71x when mounted behind an ideal “perfect” lens. Figures 1 through 3 show MTF at 10, 20, and 40 lp/mm as a function of image height for output apertures of f/0.9, f/1.0, and f/2.0, respectively.  At the maximum aperture of f/0.90 (i.e., with an f/1.2 master lens) the sharpness and contrast are extraordinary across the entire image circle. At just one-third stop down to f/1.0 the performance is equal to or better than the best photographic lenses used at their optimum apertures. An additional stop down to f/2.0 yields performance that is rarely encountered in photographic optics. In practice, what all of this means is that the new Speed Boosters will always enhance and never degrade the performance of the attached master lens. Figure 4 shows that there is less than 1 stop of corner illumination falloff even wide-open at f/0.9. There is no vignetting at all after the output aperture reaches f/2.82. Figure 5 shows that rectilinear distortion added by the Speed Booster ULTRA is negligible at less than 0.7%. 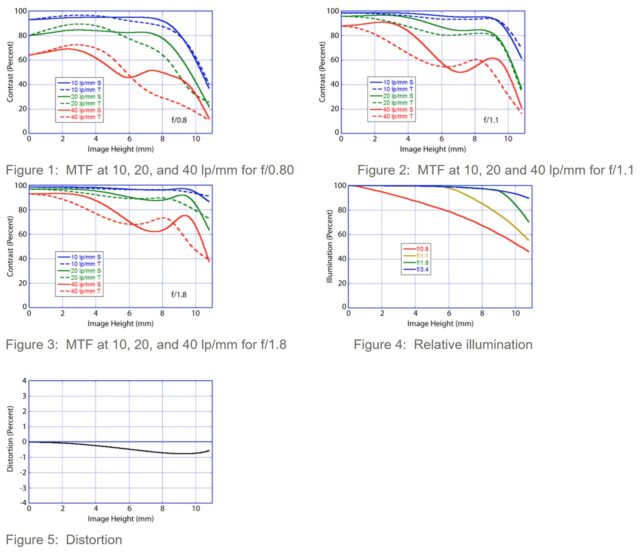 Figures 1 through 3 below show MTF at 10, 20, and 40 lp/mm as a function of image height for output apertures of f/0.8, f/1.1, and f/1.81. At f/0.80 (i.e., with an f/1.2 master lens) the sharpness and contrast are extraordinary out to an image height of 5.1 mm, which is the limiting image height of the BMPCC4K camera’s FHD video mode.  Beyond 5.1 mm the performance drops gracefully, but remains very good even in the extreme corner of the full Blackmagic sensor. Note that as the master lens aperture is reduced to f/1.8 and then f/2.8 (corresponding to output apertures of f/1.1 and f/1.8, respectively) the performance improves everywhere, especially in the extreme corners. Figure 4 shows that there is only about 1 stop of corner illumination falloff even at f/0.8. There is no vignetting at all after the output aperture reaches f/3.42. Figure 5 shows that rectilinear distortion added by the Speed Booster XL 0.64x is negligible at less than 0.8%.

(MTF data is a full diffraction-based calculation that assumes the Speed Booster is attached to a perfect master lens having an exit pupil distance of 100mm.  Note that the MTF calculations do not take into account sensor-induced apodization effects, sometimes called “pixel vignetting” or “pixel shading”, so actual results at large apertures are likely to be better than the calculations indicate.)

An important note – this new series of Metabones Speed Booster adapters is designed exclusively for the BMPCC 4K. They cannot be attached to any other M43 cameras such as JVC, Olympus or Panasonic.

The BMPCC 4K Speed Booster adapters are now available for pre-order and the prices are between US $490 and $720 depending on the version. They should ship in mid August.

Do you use some kind of lens adapter with the BMPCC 4K? How are you satisfied with the optical quality? Let us know in the comments underneath the article.