Over a month ago, we published first footage from the affordable anamorphic lens from SIRUI, plus a written review which you can find here. After Johnnie looked at the FUJIFILM X-Mount version of the lens, I took the Sony E-Mount version for a spin on a Sony a6600 with in-body stabilization.

Now I know what you are saying, Christmas images a month after Christmas? Yes you are right, I am a bit late with that, but the cinema5D beast never sleeps and there were many other things to take care of in the first weeks of this new decade (the results of which you will see on this site later this year!). I finally got a chance to sit down and edit the footage that I was able to film with my better half Anita during a stroll through Christmassy central Vienna in December, using a Sony a6600. 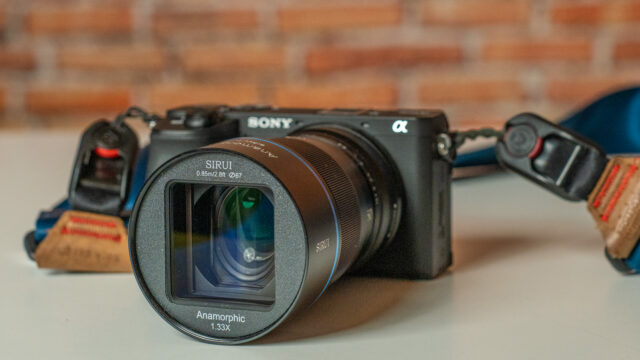 Johnnie’s review and footage was based on the FUJIFILM X-Mount version of the lens, but there’s one downside with the FUJIFILM X-T3: It comes without in-body stabilization, essentially making a tripod necessary. Because SIRUI upon request also loaned us the 50mm version of their affordable anamorphic lens wonder, I decided to put it on a new Sony a6600, activate IBIS and see what kind of images I could get within an hour or so.

Unfortunately, after reviewing the footage, I have to say that the IBIS in the a6600 might have its troubles with an anamorphic lens, or, rather, the anamorphic squeeze might amplify handling jitter. Yet the biggest problem is the massive rolling shutter in this camera, which is something that any of the entry-level Sony Alpha series cameras have been plagued with since the very beginning. The readout speed of the APS-C sensors in these cameras (and that is also true for the a6600’s predecessors) seems to be way to low to avoid movement jitter of the CMOS sensor when shooting video handheld, and the newly added IBIS (in this entry-level Sony Alpha category) doesn’t seem to be strong enough to compensate for that.

So I did what I had to do and added some post-stabilization in Final Cut Pro X in this quick edit, so you will see some warping problems here and there, but that’s the best that was possible given the starting point.

Still frame from the video shot with the SIRUI 50mm anamorphic lens on the Sony a6600.

I agree with everything Johnnie said in his review of the lens – it’s a remarkable achievement not only for the price. The lens is very sharp, even when shooting wide open at f/1.8, which was totally unexpected for me. It’s well built from metal, and I can see this show up on a lot of low-budget anamorphic productions everywhere. Right now it’s a shame that there isn’t another focal length available, I would love to see a full set of these out now, but we are hoping that they will come. If there is one thing that I don’t like, it’s definitely the minimum focus distance of 0.85 meters, which prevents you from shooting anything up close. I think there’s room for them to even introduce a second version of this lens for macro shooting. Plus, if I am after that effect, I am actually missing more horizontal anamorphic flares from this lens … it’s almost too clean. Other than that, it’s simply a great offering unlike anything else in the market right now.

Their Indiegogo campaign is running out today, so this might be the last time in a while when you can order this lens. I’m not surprised that the campaign is about to top $1 million considering how unique the SIRUI 50mm anamorphic lens is.

Have you ordered a SIRUI 50mm anamorphic lens? What do you like about it, have you shot anamorphic before? Let us know in the comments below.