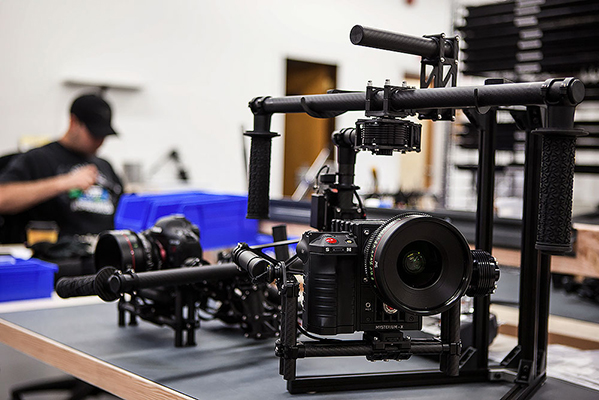 Ever since its introduction at NAB 2013 with the help of Vincent Laforet, Freefly’s MōVI handheld camera stabilizing system has been the most-talked about camera stabilizing system bar none. While its gyro-powered mechanics are nothing new, the small package and the ability to handhold such a rig are big innovations that make cinematographers phantasize about camera movements that were considerably more complicated to pull off so far. Since the introduction at NAB, a series of copycats have started announcing products which promise similar results, sometimes at a considerably lower price tag than the MR10’s cost of $15,000. (Yet most of the others only seem to take much lighter cameras like DSLRs and should therefore be compared to the MR5, which will cost $5,000.) Nevertheless, the MōVI demos still seem to be the most impressive ones, probably because they are the ones who put most time into developing the device.

Freefly has published a new demo clip of their MR10 system which was produced for a new Burton snowboard film. Again, it combines a series of incredible camera moves that would have been incredibly hard to pull off using traditional methods of moving cameras (including Steadicam rigs, which can’t be handed off that easily without a lot of training).

Be sure to watch the Behind-the-scenes, which actually makes clear how simple these movements were staged – they certainly look a lot more advanced than they actually were to pull off!

I can’t wait to shoot a proper review clip comparable to all those demos ourselves, and see what the system can do once I get my hands on one of the first shipping units.

Freefly has also sent out a shipping update to all those on the preorder list. A first few MR10’s are shipping now, but the next batch will be delayed by 10 days or so because of a “cosmetic issue” with some parts that were received from a supplier.

Wow! What a day it has been! We have completed our first day of pre-order shipping. As is par for the course when launching a new product, we have had our ups and downs. The fantastic news is that we sent out our first small batch of MōVIs today. Unfortunately, we did encounter a minor problem. We received some components that had a cosmetic issue. Given the very high standards we hold for our products, we opted to reject these parts and delay shipment of the 2nd batch of MōVIs. The supplier has assured us we will have the parts in the next 10 days; therefore, we anticipate that this will only delay the 2nd batch of MōVIs. We understand the excitement and anticipation around delivery and will be working swiftly to keep on schedule for all subsequent batches.

Additionally, the MōVI has evolved substantially since you all saw it at NAB. We wanted to share a few images so you can see the improvements. The system can be balanced quickly without tools and can now fit an EPIC with side handle. These improvements will help reduce setup time and allow you to focus on creating amazing shots.

We thank you for your patience and rest assured our team is 100% focused on getting your MōVI to you as quickly as possible.