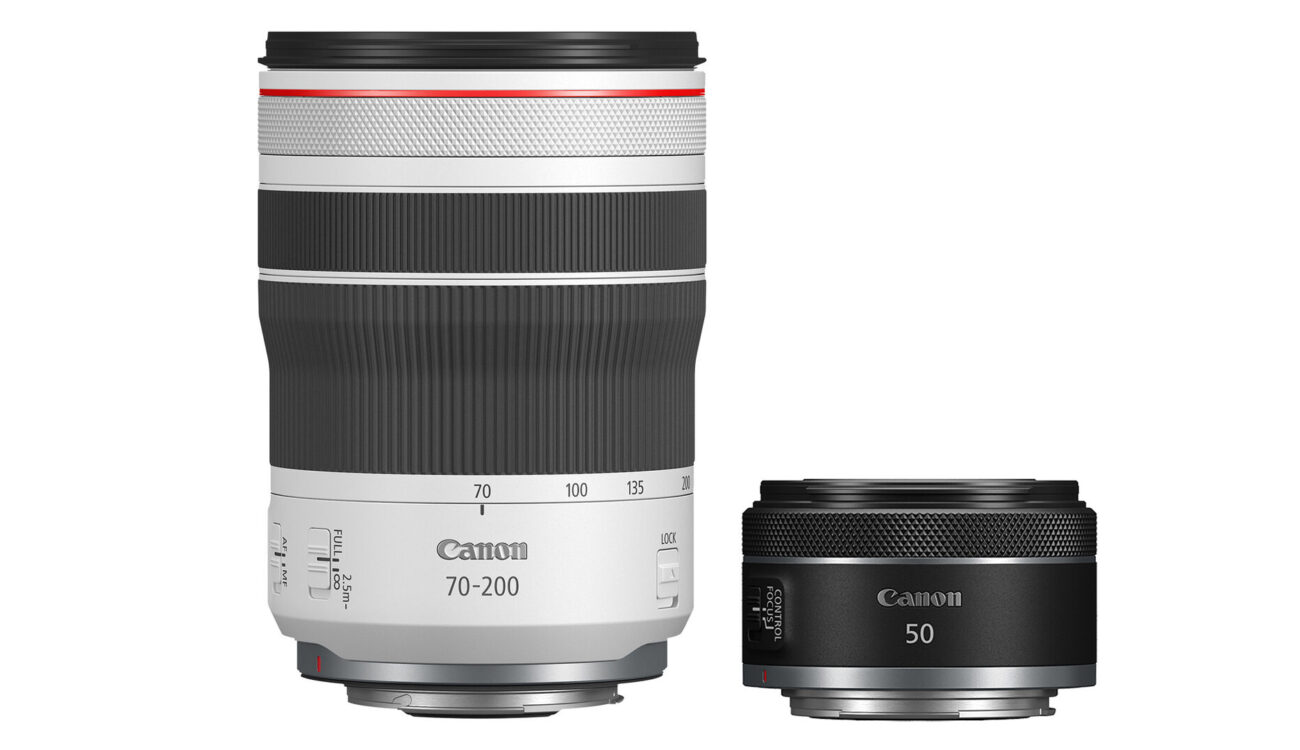 Let’s have a look at the first offering:

The field of view of a 50mm lens on a full frame camera makes it a nice always-on type of lens that is suited for many photography scenarios. For many photographers it’s considered the “normal” focal length that comes as close to human vision as it gets. The Canon RF 50mm f/1.8 STM is almost a “pancake”-type of lens and adds little bulk to the camera body, which will make it interesting for street-photography and unobtrusive filmmaking, alike.

And when it comes to specs:

The STM (Canon’s designation for STepper Motor) provides swift and quiet autofocus. The AF can be overridden manually by using the Focus/Control ring.

The maximum aperture of 1.8 gives photographers and filmmakers a shallow depth-of-field and good low-light performance. The Diaphragm-blades are rounded, which should help with achieving a nice, round bokeh.

The aforementioned control ring can be configured to adjust a variety of exposure settings. These include aperture, ISO and exposure compensation.

The Canon RF 50mm f/1.8 STM is a relatively cheap lens. Tests will tell if it will have its place in many a photographers’ bags or not. But I think for the money and considering its size, the lens is going to be no-brainer for many RF-Mount camera owners.

Like its more expensive f2.8 pendant, the RF 70-200mm f/4L IS USM is the go-to zoom range for many photographers and filmmakers. Mainly because of its reach and flexibility.

The constant f4 aperture is a bonus for filmmakers, as they quickly zoom in and don’t have to compensate for changing exposure. On top, because the zoom starts with a rather long focal length of 70mm, it’s possible to achieve a reasonable, shallow depth-of-field despite it only having an f4 maximum aperture.

A Dual Nano USM system utilizes both, a ring type USM (Ultra Sonic Motor) and an STM (STepper Motor) mechanism to realize quick and accurate focusing that is also smooth and nearly silent, to suit both photography and video applications. This focusing system also offers full-time manual focus control when working in the one-shot AF mode.

The Canon RF 70-200mm f/4L IS USM is an “L”-series lens, which means it is weather-sealed and protected against dust and moisture.

The lens’ compact design comes at a cost, though. Unlike the legendary 70-200 f4 EF-L (or the f2.8 version for that matter), it does telescope out, when zoomed in. That makes using a matte box very unwieldy.

However, there is no doubt on my end that this is going to be a workhorse-lens for RF-Mount photographers as well as filmmakers.

The RF 70-200mm f/4L IS US ships with a protective pouch and a lens hood, which is not always the case with Canon lenses.

I am sure the optical quality of both lenses will be what one expects from Canon products, within their respective price range. Nonetheless, both lenses are primarily designed for photographers with, video application being an afterthought. But, filmmakers will make due with the limitations, as they have done in the past.

Both lenses can be preordered now. Check out the links below.

What do you think of Canon’s RF-Mount in general? And about the new lenses in particular? Are you shooting with an RF camera already, or are planning to? Let us know in the comments below!