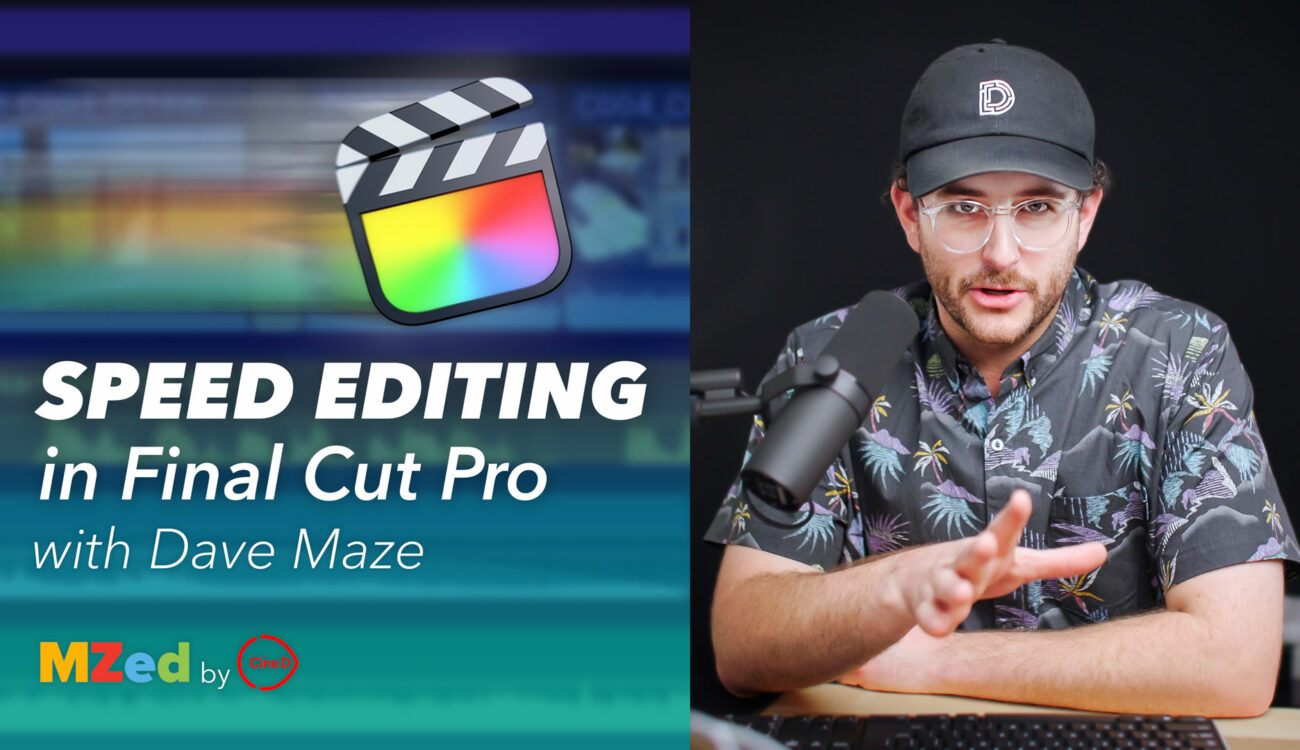 One of the main attractions to Final Cut Pro is speed, but it takes some guidance to learn how to optimize your workflow for maximum efficiency. Today, we’re excited to launch a brand new course on MZed: Speed Editing in Final Cut Pro with Dave Maze.

Dave Maze has made a career out of being fast. Before he became a video creator, Dave was a magician who could a-maze audiences with his sleight of hand. Then, he moved on to wedding filmmaking where he turned out same-day edits that brought couples and guests to tears mere minutes after their dance floor shenanigans. And then Dave moved on to YouTube, where he hosted Indy Mogul and now runs his own very successful YouTube channel.

Dave has even created the most popular gif for the term “editing” and it’s all about speed!

What’s Dave’s trick? How can you post several videos a week to YouTube, or edit client videos so quickly that you have more free time to pursue other clients or personal work?

It all comes down to cleverly using Final Cut Pro, which by default is set up for quick editing, no matter what kind of video project or content you’re working with. And Dave will show you his favorite hacks and techniques that will make you a quicker and more efficient editor than you would imagine.

So, what will you learn in this 3-hour course? Let’s dive into each lesson.

In the first lesson, Dave walks you through the best approach to importing media from a camera, setting up a Final Cut Pro library, events, and projects, and organizing the footage in a way that sets you up for quicker editing.

Dave shows you how to set up a project, build the edit, get your audio and LUT loaded up, and speed up the workflow with compound clips and copying and pasting attributes.

Once you have the base edit, you can start to lay down B-roll. Dave shows you his tips for setting up and using keyboard shortcuts, optimizing the workflow, and focusing on the creative edit as you speed through this part of the editing process.

If you’re a YouTube video creator, you’ll most likely need to use external media to spice up your content. Dave shows you his workflow for downloading and using images, video, and special FX from the web to enhance your video edit.

One way to speed up an edit in Final Cut is to create all your titles and text templates in advance. In this lesson, Dave shows you how to work with titles in Final Cut, as well as create custom templates in Apple Motion.

Dave shows you how to quickly color correct LOG media, use color wheels, masks, effects, and how to create templates to speed up the process.

In this lesson, Dave shows you his favorite methods of finding and working with music tracks in Final Cut Pro.

Even though the interface is simple, there are actually several different methods of exporting a video from Final Cut Pro. Dave shows his favorite method of exporting for YouTube, and how you can optimize this final step in the speed editing process.

Dave wraps up the Speed Editing in Final Cut Pro course with some final thoughts.

What If You’re Already an FCP Editor?

I switched to FCPX the day it came out over 10 years ago, and it’s become an essential part of my life as a video producer/shooter/editor. I’ve also taught many in-person workshops in using FCPX for short form documentaries. So, I feel like I’m pretty well versed in Final Cut Pro. Yet, while watching Dave Maze’s course, I realized there’s a whole world of YouTube content creation that demands much more speed out of an editor than client work.

In the course, Dave shows how a YouTuber has to pretty much have everything dialed in before plugging in the current edit. From pre-made titles and effects to quick go-to’s for music and transitions, and even his favorite way to grab videos and images from the web to spice up his own content (while crediting the original creators). There’s a whole system to being able to upload 1-2 videos a week – or more if you’re crazy. And the Final Cut Pro courses out there really don’t cover this kind of demanding workflow.

So, even if you’re already versed in FCP, I highly recommend checking this course out. We can all learn a thing or two from Dave, who has been tinkering with his workflow and methods for years in order to fully optimize his editing strategy.

What do you think? Have you figured out some good Final Cut Pro speed hacks? Share your experience below in the comments!